Title joy for Magnussen and Dams 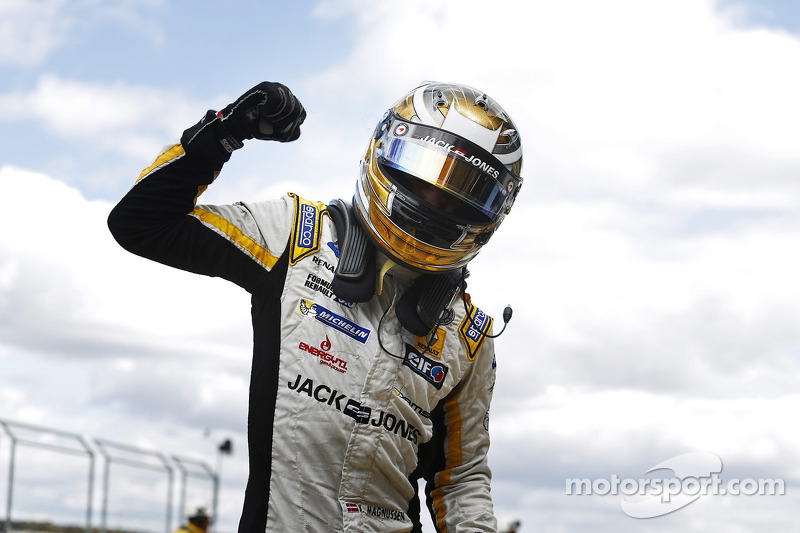 Kevin Magnussen and the Dams team clinched the Formula Renault 3.5 Series after he set a new series record with four-consecutive poles.

In peerless form from the moment Friday’s collective testing got under way, Kevin Magnussen (Dams) clinched the Formula Renault 3.5 Series title in the weekend’s first race at Barcelona. The Dane did it in style too, taking the chequered flag from Will Stevens (P1 by Strakka Racing) and Stoffel Vandoorne (Fortec Motorsports), and helping Dams take the team crown in the process.

Kevin Magnussen began the day in record-breaking fashion by becoming the first driver ever to score four consecutive poles in Formula Renault 3.5 Series. At the end of a keenly contested qualifying session, the Dane occupied pole ahead of Will Stevens, William Buller (Zeta Corse) and his championship rival Stoffel Vandoorne.

Kevin Magnussen surged away from the lights in first, followed by Will Stevens, with Stoffel Vandoorne finding a way past William Buller and into third. Carlos Huertas (Carlin) stalled on the grid, while there was turmoil in the pack as Marco Sorensen (Lotus), Nigel Melker (Tech 1 Racing), Norman Nato (DAMS), Marlon Stockinger (Lotus) and Yann Cunha (AV Formula) came together.

The safety car made its appearance before pulling in at the end of lap six, at which point Kevin Magnussen promptly began to pull away despite the best efforts of Will Stevens and a slight mistake by the Dane on lap 22. There was plenty of action going on behind them, meanwhile, as the drivers in the pack scrapped it out for the minor placings, with DRS strategy having a big say.

Kevin Magnussen: “It feels so special. Nothing compares to this. I had to finish the job off and we did it together, with the whole team. It’s been a fantastic season and I love working with Dams. It might look like it’s all gone pretty smoothly but there have been ups and downs. It’s been very tough but I’ve achieved what I set out to do. I can’t wait for what lies ahead.”

Will Stevens: “We’ve had a challenging year several with a range of problems cropping up at the worst times. The performance has always been there though. Today went well and we gave Kevin a tougher test than anyone. We need to go for the win again tomorrow.”

Stoffel Vandoorne: “My sincere congratulations to Kevin. He’s had a fantastic season and he’s just been unbeatable recently. I’ve done my best and what I need to do now is hold on to second place. It’s been a good season with some good moments and some trickier times. As a rookie, I can’t say it’s been a disappointing year for me.”

A perfect day for Magnussen in Barcelona