Mercedes F1 boss Toto Wolff says he accepts responsibility for the complicated situation the team found itself in the Russian Grand Prix.

Wolff said he distracted chief strategist James Vowles at a vital moment and caused Lewis Hamilton to pit a lap later than what would have been the optimum time.

Race leader Valtteri Bottas pitted on lap 12, but instead of bringing Hamilton in on the next lap, the team left him out.

Sebastian Vettel was told by Ferrari to do the opposite to what Hamilton did, staying out if the Mercedes ahead pitted, and come in if it didn't.

It was at that moment that Wolff says he was talking to Vowles about possible scenarios. While that conversation took place, Hamilton stayed out, and Vettel duly came in.

When Hamilton pitted a lap later, he emerged behind the Ferrari, although he went on to pass him moments later.

Wolff admitted that Hamilton should have come in on lap 13, before his first set of tyres was past its best.

"We got tangled up in the way we called the pitstops," said Wolff. "We did the right thing by calling Valtteri in first, that it would have protected his position, but we were one lap too late with Lewis.

"I'll take it on me, because I was engaging with James [Vowles] in a conversation when he should have made the call. And this is why he came in a lap too late and lost position.

"While we were considering what to do, I was in exchange with James, and this made us pit one lap too late.

"We pitted Valtteri and then Lewis came on the radio and said it is one lap too late, Seb has pitted and we already committed to another one because we were having a discussion about it, and it was just this one session too much."

By blistering his new set of tyres getting past Vettel, Hamilton triggered the team orders controversy that saw Bottas subsequently hand over the lead.

"Lewis had to fight hard to overtake Sebastian, which was really an awesome move, but blistered the tyres. And then we were in a situation that Valtteri in front managed the tyres, Lewis behind with a blistered rear and Sebastian all over Lewis.

"And at that stage, there were two possible outcomes. The best case would have been it stays like it is and we finish second with Lewis and win with Valtteri, the worst case was the blister wouldn't last until the end and Lewis would have been overtaken by Sebastian in order to manage his tyres.

"This is why I think Valtteri in between was the call we made. Rationally, it was the right call to do, but our sporting heart says no."

Wolff added that had the blistering become more serious the consequences for Hamilton could have been even worse that just losing out to Vettel.

"We saw it at Spa, we had to pit another time. Ferrari at Monza had a bad blistering problem and had to pit again.

"Imagine the scenario, having to pit Lewis again and finishing sixth or seventh. Finishing sixth, rather than winning the race. That's the pressure moment where we made the call." 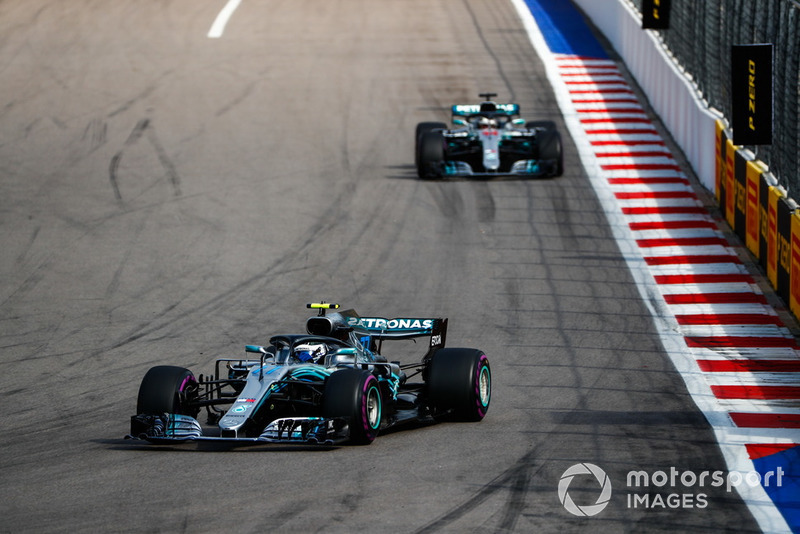