In the end, Webber says he will walk out of the Interlagos paddock late this month with his head held high.

Nov.1 (GMM) Mark Webber has admitted he came "very close" to ending his career in a Ferrari.

"So close," he is quoted by Speed Week in the Abu Dhabi paddock, "that I had to take the phone in my hand and call (Red Bull team owner) Dietrich Mateschitz." 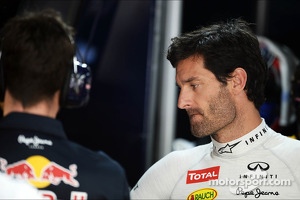 Webber, who will leave Formula One and switch to Le Mans for 2014 after this month's Brazilian Grand Prix, is referring to last season, when Ferrari was on the market to replace Felipe Massa.

"We couldn't find an agreement with Ferrari," said the Australian, "or I'd be sitting right now in Felipe Massa's car -- also in 2014," he revealed.

"I had set myself a deadline and on the Thursday before Canada last year I made the decision to stay another year with Red Bull," said Webber.

In the end, Webber says he will walk out of the Interlagos paddock late this month with his head held high, happy with his F1 career even though he missed the world title.

"It was not meant to be," he is quoted by Auto Motor und Sport, "but it was a proud and honest career.

"I see myself on par with the one-time champions," said Webber. "Am I a potential multiple champion? The answer is clearly not," he admitted.

Webber therefore admits that his teammate Sebastian Vettel, with whom he has shared a tense tenure at Red Bull, is better.

"Seb is exceptional," he said, "and I have no problem admitting it.

"In some ways I feel like Gerhard Berger with Ayrton Senna -- Gerhard was also a great racer, but not enough for the title."

Vettel moves back to the top in Abu Dhabi