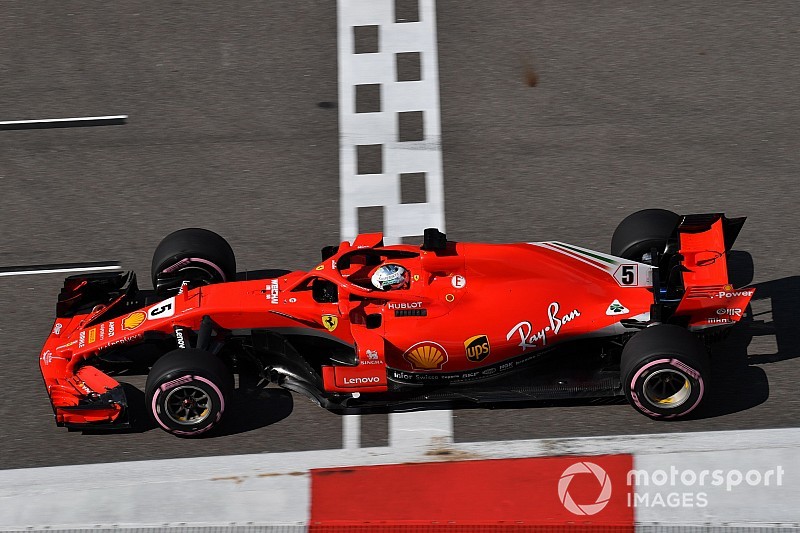 Sebastian Vettel says it is wrong that the Sochi circuit has been partially resurfaced in a way that means the top grid slots are positioned on newer asphalt.

Ahead of this year's Russian Grand Prix, a small stretch by the start-finish line was resurfacing and the same was done just before Turn 1 and on the approach to Turn 8.

The front row of the grid will be occupied by Mercedes drivers Valtteri Bottas and Lewis Hamilton on Sunday and they will be completely on the new surface.

Asked by Motorsport.com about the impact this could have, Vettel said: "I don't know, I thought P3 is also just in range. If not that's not good.

"If you resurface something on the grid you should resurface everything. But it is what it is."

The Mercedes duo were uncertain about whether it would be a good thing or a bad thing.

However, they both acknowledged that a new surface usually makes a difference of some kind.

"Usually new tarmac tends to have a bit more grip but it also depends on the type of the tarmac.

"We've been only driving around that part of the track in non grip-limited conditions, flat out, so we'll find out tomorrow how it's going to affect it."

Practice starts have only been carried out in the pitlane, where this is a small patch that is the same new surface as on the front row.

However, per the usual rules for free practice, nobody has attempted a practice start on the grid itself.

"It's pretty much the same as what Valtteri said: tarmac is always different but we've not done a start out there," Hamilton said.

"I'd anticipate it will probably be different to the older stuff but whether it's better or worse we'll find out."

Hamilton: Q3 error down to "slacking" in middle sector