The clues Aston Martin has given about Vettel's new car

Aston Martin looks set to have a revised chassis at its disposal for 2021, with the Formula 1 team suggesting it has spent its allotted development tokens on redesigning this area of the car to help unlock more performance.

This information was offered up by Aston Martin's team principal Otmar Szafnauer in an interview with Sky Sports F1 looking at the campaign ahead.

With a rebranding from Racing Point to Aston Martin, plus the arrival of Sebastian Vettel, the Silverstone-based outfit seems bullish about its campaign ahead.

Reflecting on the car, Szafnauer said: "We didn't have the normal latitude of development that we usually do, so from a philosophy standpoint running a low rake car, that's stayed the same.

"Although the philosophy is a carry over, we will still have a lot of new parts on the car, a lot of new aerodynamic development and even a new chassis for us as well. So although the car will be similar to last year it's predominantly new".

A development freeze and token system was introduced last year by the FIA in order to help cut costs and help bridge the gap to the all-new car that was supported to first come in 2021 but has now been delayed until 2022.

This means most of the main hardware on the cars will be carried across from last season. However, each team has the ability to spend two tokens in order that they aren't too heavily handicapped by a specific design aspect that was not to their liking in 2020.

Aston Martin appears to have chosen to spend its two tokens on a big ticket item: the survival cell.

Divisible by the B-B line, the survival cell is listed as two sections, both of which carry the cost of two tokens, meaning only one can be changed.

As such, Aston Martin will likely have made alterations to the rearward section of the survival cell in an effort to reverse a decision taken last season.

The RP20 featured the Side Impact Protection Spars above the sidepod inlet, mirroring the design of the Mercedes W10 it was modelled upon. That decision made it the only car in the field not to have the SIPS in the lower slung position, as was first introduced by Ferrari in 2017.

The decision to have the SIPS in the lower position is primarily driven by aerodynamic factors but will require the internal cooling solutions to be repositioned in order that the team can reap the full rewards of it. 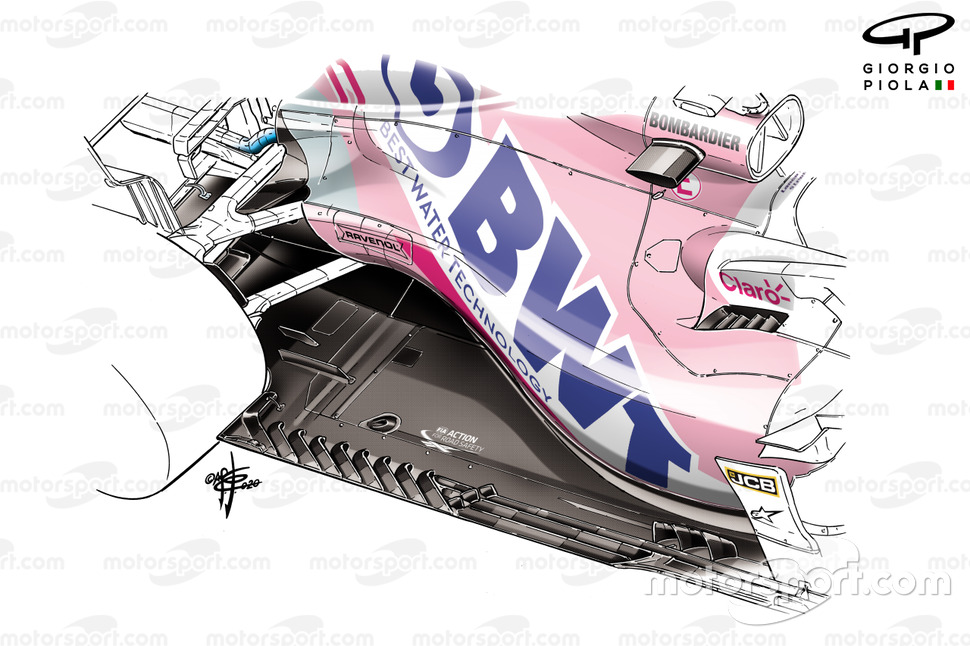 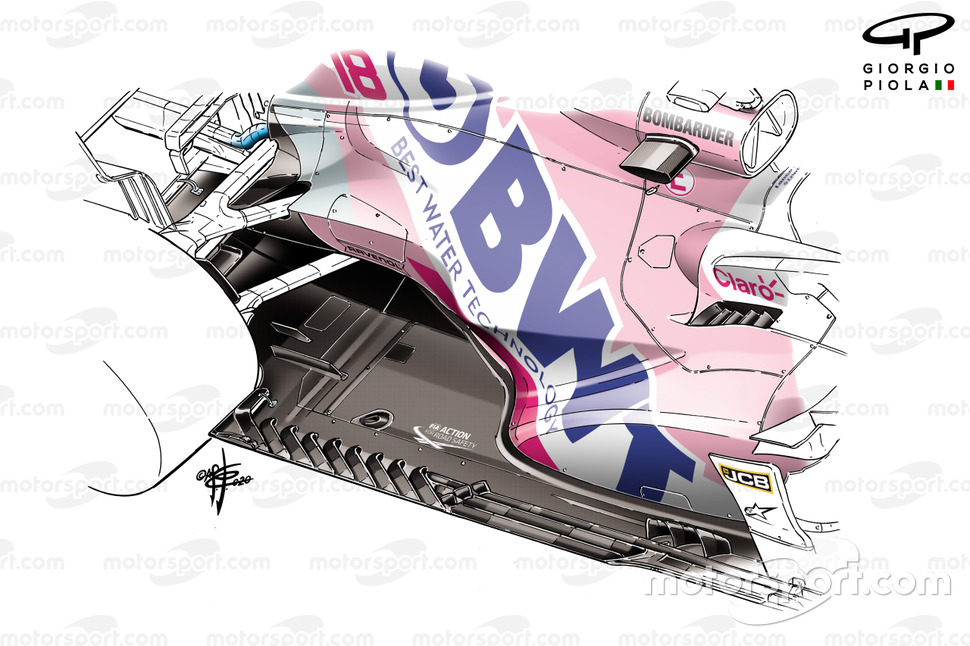 This is actually something that the team spent a considerable amount of time and resource on last season, as a major upgrade package that was first raced in Mugello featured new sidepod bodywork (right).

This was part of a major overhaul that was designed to take into account the more efficient AMG M11 power unit, which required less cooling than its predecessor and allowed the team to cast aside the design it had adopted when studying the W10.

This year's design will undoubtedly build on this principal, not only taking into account its experience with the new bodywork last season and another new power unit from HPP, but also its own foray with lower slung SIPS in 2019 (below). 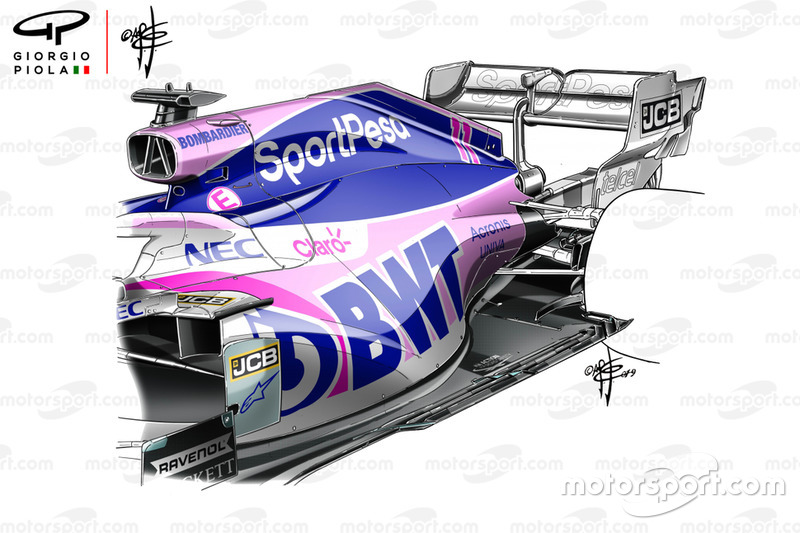 Aston Martin, then Racing Point, was already in the middle of a storm regarding the token system last season, as both itself and Alpha Tauri were able to switch to 2020 parts supplied to them by Mercedes and Red Bull technologies respectively without having to spend tokens in doing so.

This meant both are able to use a 2020 specification gearbox and rear suspension layout. While AlphaTauri has elected not to go down that route, Aston Martin will almost certain take advantage of what it can. 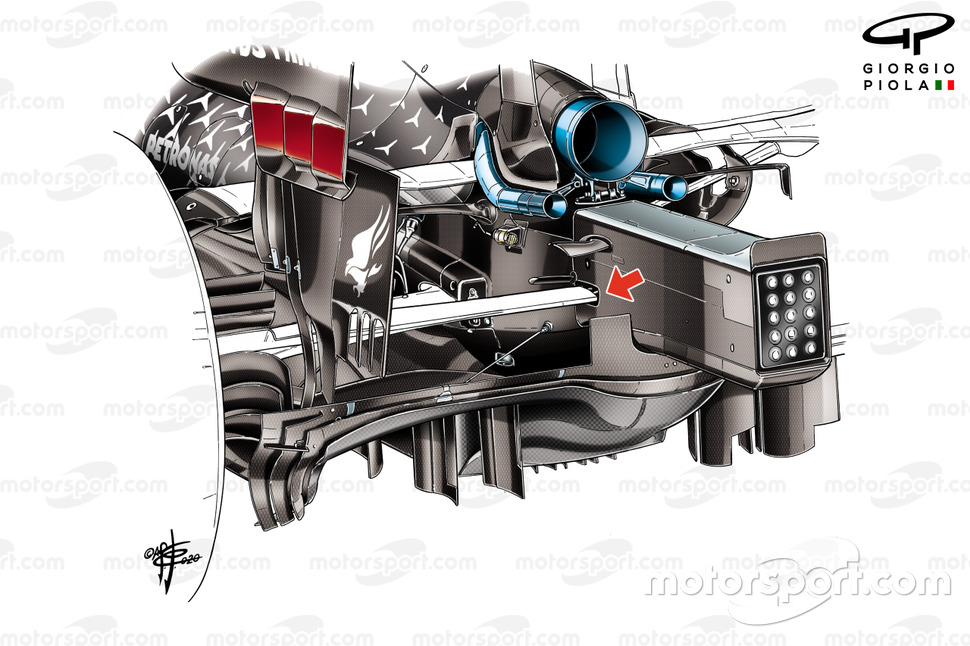 The rear suspension on the W11 featured a new geometry, with the rear leg of the lower wishbone fixed higher and at a point much further back on the crash structure than we'd usually see.

The primary reason for this, as always, was not mechanical but for better aerodynamics, with the arm moved into a more desirable position for flow in the channel next to the diffuser.

Meanwhile, the inboard anchorage point was raised to reduce the airflow bottleneck where the diffuser ceiling is raised up to meet the underside of the crash structure and gearbox.

This comes off the back of it raising the inboard mounting point of the pullrod in 2019 for similar reasons.