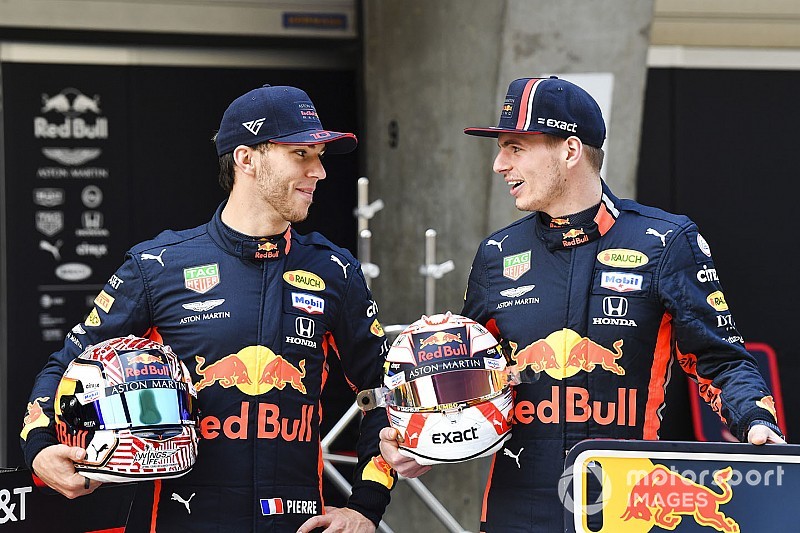 Max Verstappen says being surprised by late overtakes by his Formula 1 rivals prompted him to block Red Bull teammate Pierre Gasly at the end of Chinese Grand Prix qualifying.

Verstappen was overtaken by Sebastian Vettel’s Ferrari and both Renault drivers between the last two corners of the Shanghai circuit as a queue of cars prepared for their final flying laps in the top-10 shoot-out.

This prevented him from starting a lap in time before the session ended and prompted him to block Gasly as his new teammate tried to overtake him into the final corner as well.

Asked by Motorsport.com to explain what happened, Verstappen said: “We were too late anyway [to get across the line] and I already had three cars who overtook me. I was just getting my spot [in the queue].

“Pierre also got the hurry-up from his engineer so I think it’s quite normal.”

Asked if he did not want to let him past after being unexpectedly overtaken by the others, Verstappen said: “Looked like it, didn’t it? But we were too late anyway.”

Both Red Bulls and both Haas drivers failed to across the line in time at the end of the session.

Asked by Motorsport.com if he was surprised by Verstappen’s move to left as Gasly looked to the inside, Gasly said: “Well, not so much, because I think at that time we were five cars in about 30 metres, so I knew there was not enough space for everybody.

“You just try to get the maximum out of it. I was just trying to find a gap, and in the end we both didn't make it. It was not ideal but it wouldn't have changed the position in qualifying, so no big deal.”

In the aftermath, an angry Verstappen had accused his fellow drivers of behaving like "wankers" and breaking the “gentleman’s agreement” not to interfere with one another’s preparations at the end of a lap.

Speaking slightly later, he admitted was not sure himself how long was left but did not want to be the “asshole” overtaking someone.

Verstappen said he was only hurried up by his team “when they got past” and said that, plus the actions of his rivals, prompted the “mess”.

“I thought it was 15 seconds left, or 20, I was just following the car ahead,” he said. “Then Seb went in between. So I wanted to back out of that. Then the Renaults went in front, I was like ‘where do I go now?’.

“I could start my lap behind them but then your lap is ruined anyway. You need at least four or five seconds otherwise you get disturbed by the air.”

He added: “Next time it’s just a little more clear that I know it’s 10/15 seconds left and I know to go as well.

“I think everybody just went a bit too late. If I’d gone, the cars behind me wouldn’t have made it. I guess everyone was just waiting too long.”

Vettel: Gap to Mercedes "too big" in China