Subscribe
Previous / F1 drivers hopeful Mugello race won't be as ‘dull’ as feared Next / Vettel tried to buy Ferrari F2004, but it was "too expensive"
Formula 1 / Tuscany GP Special feature

Racing Point introduced what it calls a "significant" upgrade at the Tuscan Grand Prix, with Lance Stroll getting exclusive use of the new parts for Mugello.

The changes to the car are the first major updates the Silverstone-based outfit has brought this season, in a year where its RP20 has raced under the shadow of being called a 'Pink Mercedes.'

Interestingly the changes – which include shrink-wrapped sidepods, new floor, new front, new engine cover and new brake ducts – have shown the team to be moving away from purely copying last year's Mercedes.

The changes are certainly significant, suggesting the update has been in the works for a considerable amount of time given they have not only aerodynamic but cooling ramifications too.

As the only team on the grid not to have the upper impact support spar in the lower position, as was originally conceived by Ferrari in 2017, Racing Point has has to design around that factor.

Based on this choice, the architectural layout of the internals, including its radiators and air-to-air intercoolers, differ from the rest of the grid.

That factor has forced the team to look at things a little differently in order to try and make gains, with the new bodywork shrink wrapped extremely tightly around the impact support spar and internal components, leading to some rather angular lines. 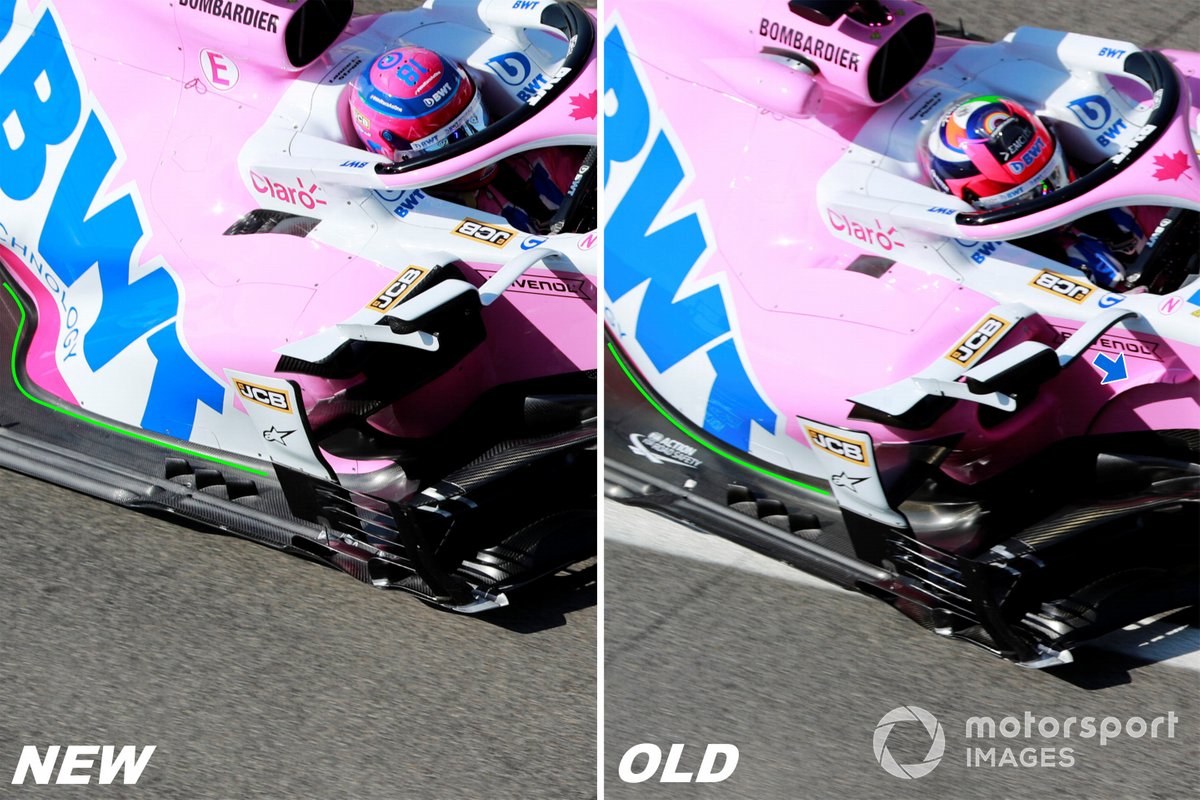 Meanwhile, the changes also appear to have resulted in the team discarding the drooping chassis canard (blue arrow), as flow into and around the sidepod will be altered accordingly.

In the comparison below we can see how the outer section of the sidepod now ramps down to the floor into the coke bottle region, rather than gradually curving around to meet it.

A ridge is also formed at the intersection of the sidepod and engine cover bodywork. Having taken an approach that sees it almost vacuum packing the bodywork to the internals, the team has been forced to create a blister around the exhausts, which can be seen around the ‘WATER’ in the BWT sponsorship logo. 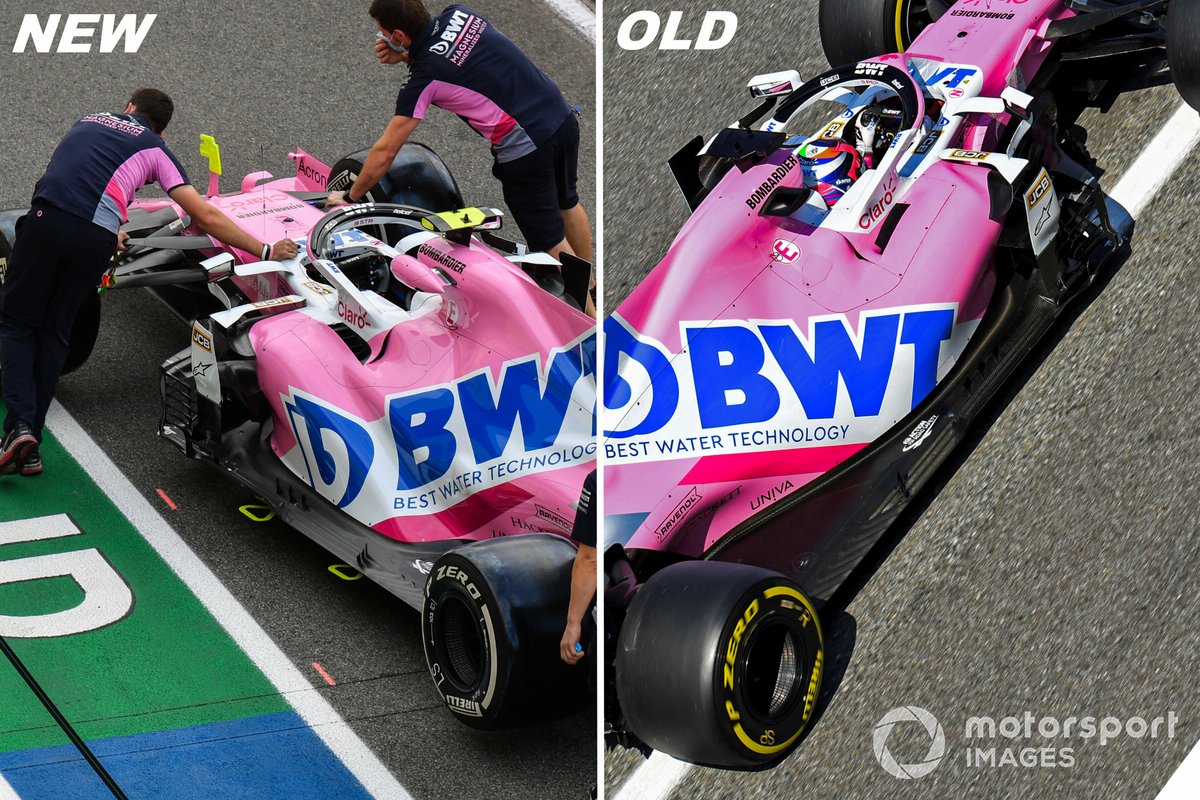 This update shows that the team is using significant resources to step out from behind the shadows of the Mercedes design concept and stamp its own design DNA on the car going forward.

Following on from the brake duct saga that Renault pursued against Racing Point, with the team found guilty of using a Mercedes rear brake duct design, Racing Point has made changes to this area too. 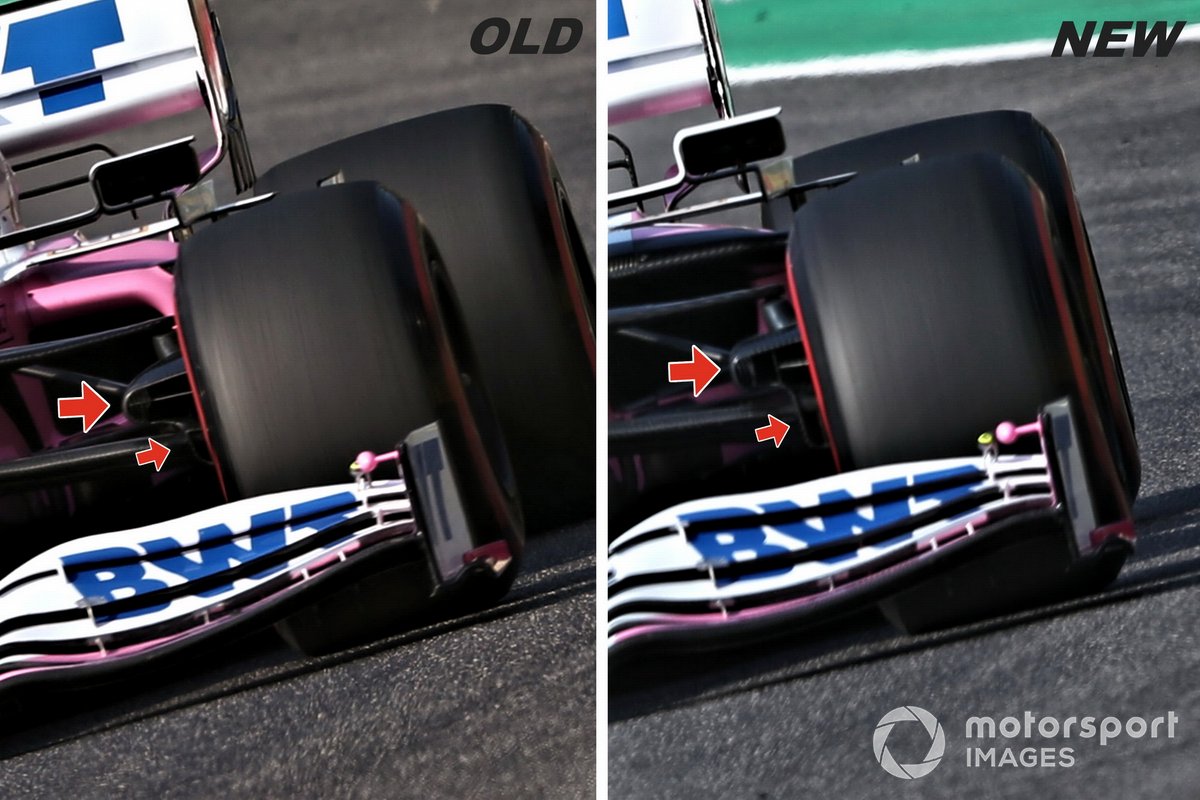 The brake duct design used by Racing Point so far this season held a close resemblance to the ones used by Mercedes last season, whereas the new design used by Lance Stroll this weekend has its design routed in the ones seen on the current Mercedes.

Even though these new brake ducts continue to follow the same design lineage as Mercedes, the FIA has already set a precedent whereby they will be considered acceptable. 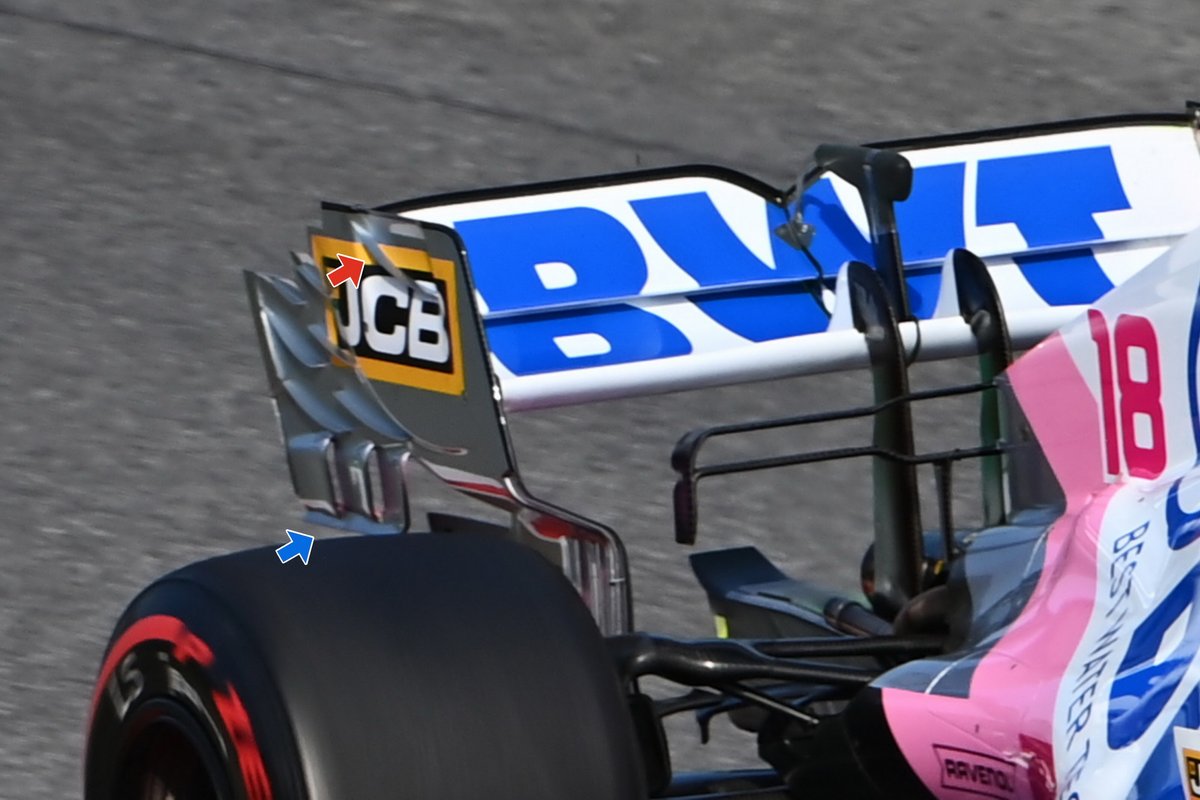 At the rear of the car the team has continued to be inspired by Mercedes, as it has optimised its rear wing design once more. The forwardmost hanging strake now has a tail on it that traverses the rear two strakes (blue arrow).

The team has also added another upwash strike on the front upper corner (red arrow) to reinforce the effect that it is already trying to get.

Vettel tried to buy Ferrari F2004, but it was "too expensive"