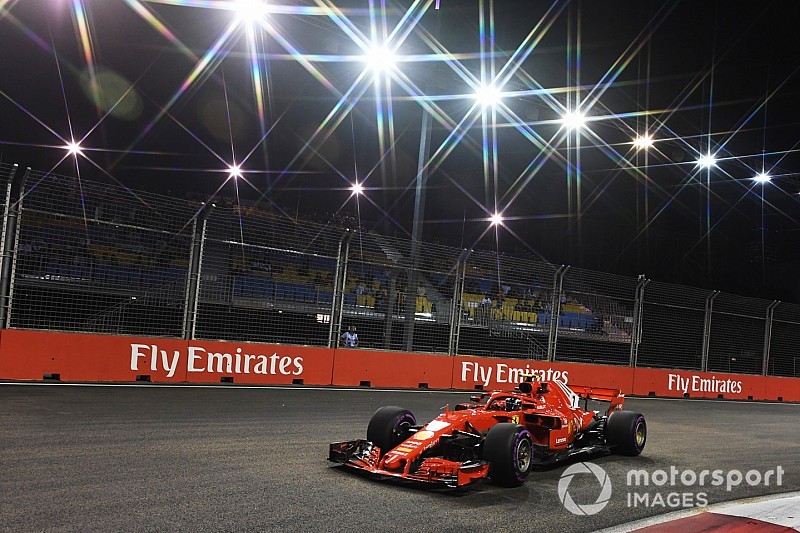 During the early running, Lewis Hamilton went off up the Turn 14 escape road after a near miss with Sebastian Vettel.

Hamilton was closing rapidly on the Ferrari when he locked up into the right-hander, narrowly avoiding hitting the red car.

Raikkonen then claimed top spot with 53 minutes of the session remaining, setting a lap of 1m38.699s to beat Hamilton by 0.011s.

Vettel was on a lap that could have challenged the top two when he hit the wall with the right-hand side of his car exiting the Turn 21 left-hander late in the lap.

He was able to recover to the pits, but reported he suspected he had sustained damage, with evidence of a leak as his car was dragged into the garage.

Vettel did not return to the track, ending up ninth based on his pace on ultrasofts earlier in the session – lapping 1.934s off the pace.

Red Bull's promising early pace did not carry over to its qualifying simulations, with Max Verstappen 0.522s off the pace in third, just under a tenth faster than teammate Daniel Ricciardo.

Later in the session, Verstappen reported he had a problem coming out of Turn 7 with a "misfire or something" - later telling the team that the problem was recurring.

The pace of the Red Bulls meant Bottas was shuffled down to fifth, 0.669s off the pace.

Carlos Sainz was best of the 'Class B' runners for Renault, lapping 0.906s off Bottas and three tenths faster than Haas driver Romain Grosjean.

Force India ran a major upgrade on both cars, with Sergio Perez 11th and Esteban Ocon 13th – split by the Sauber of Marcus Ericsson, who had a spin late in the session.

Charles Leclerc recovered from his first-session error, when he struck the wall and damaged his front-right suspension, to end up 14th fastest.

Kevin Magnussen rounded out the top 15 for Haas, 2.455s off Raikkonen's time and just 0.010s faster than McLaren's Stoffel Vandoorne.

With Toro Rosso pairing Brendon Hartley and Pierre Gasly 17th and 18th respectively, Williams duo Lance Stroll and Sergey Sirotkin brought up the rear, both almost 3.5s off the pace.

Stroll suffered a right-rear brake fire during the session, but was able to get it under control by slowing down to cool the brakes and return to the pits.