Lewis Hamilton exerted his dominance over the field with the fastest time for the final Formula 1 practice session for this weekend’s Russian Grand Prix. 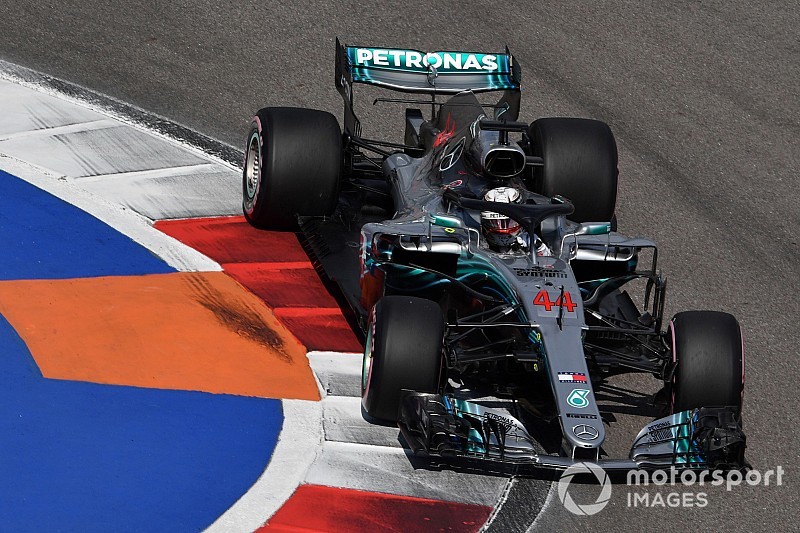 Hamilton and his teammate Valtteri Bottas finished 1-2, while Ferrari was struggling for outright pace, with Sebastian Vettel third ahead of his teammate Kimi Raikkonen.

Vettel's best time was 0.600s off the quickest time set by Hamilton.

The pace of Mercedes and Hamilton in particular – 0.254s ahead of Bottas – bodes well for qualifying which takes place in Sochi later this afternoon.

Despite the Ferrari's setting the pace early on, Mercedes soon eclipsed them when both Bottas and Hamilton took to the track 20 minutes into the hour-long session.

Conditions in Sochi were sunnier than yesterday, with a maximum air temperature of 24 degrees C. Like Friday's two practice sessions, this morning's hour-long period was free of incident.

Vettel's session finished at the end of the pitlane as he was too late to make a second attempt to try a practice start and stopped his Ferrari just short of the red light.

When he exited the pits a few minutes earlier it was a close call as he came into the path of Daniel Ricciardo, who was driving to the right of the track.

Max Verstappen was fifth quickest in his Red Bull, despite having to abort his first flying lap when he ran wide on three occasions on the lap. He finished nearly half a second ahead of his teammate Ricciardo.

Finishing the session in an impressive seventh place - and best of the rest – was the Sauber of Charles Leclerc, one place ahead of Force India's Esteban Ocon.

Kevin Magnussen's Haas and the second Force India of Sergio Perez rounded out the top 10, the latter 1.8s off the outright pace of Hamilton across the 5.8km Sochi lap.

The two Renaults of Carlos Sainz and Nico Hulkenberg were 12th and 14th, with Pierre Gasly (Toro Rosso) and Romain Grosjean (Haas) splitting them - the latter had a minor spin at the final corner at the end of the session.

Wehrlein on "long list" of candidates for Toro Rosso seat