Formula 1 chief Ross Brawn has suggested that the sport’s bosses will look at tweaks to the rules in the future to try to recreate the kind of spectacular restarts seen at the Brazilian Grand Prix.

A change to the regulations made for this year means that, following safety car restarts, drivers are not allowed to overtake until they have crossed the start-finish line. In the past, they were allowed a free run from Safety Car 'Line One', which was situated before the pit lane entry.

The new rule meant that in Brazil the leading driver at the restart held the pack until right before the start-finish line, rather than blasting away from the final corner as had been the case in the past. This set up a spectacular dice for position on both occasions – which included Max Verstappen pulling off a brave move around the outside of Lewis Hamilton at the first restart.

Brawn, who is F1’s managing director of motor sport, says that the entertainment value of the restarts has been noted and that changes could be made to help recreate it at future events.

Speaking about Verstappen’s victory in the regular post weekend debrief from F1, Brawn said: “He was particularly strong at the second re-start, when he slowed the field right down with the aim of ensuring no one would be able to slipstream past him and snatch victory.

“It was an exciting and fascinating re-start which will be analysed very carefully, as the closeness of the pack in the seconds leading up to the green flags resulted in a thrilling spectacle as drivers jockeyed for position and where the slightest advantage proved decisive. Examining the possibility of procedurally recreating those conditions in future is an interesting concept and one that will undoubtedly be explored in the coming period.”

Brawn was not the only one who enjoyed the frantic restarts, with Daniel Ricciardo saying he had enjoyed seeing them play out.

“It was cool,” he said, when asked by Motorsport.com about the new procedure. “I think because now they do no overtaking until the control line, or the start finish line, it allows us to basically not leave so early, and push it to the very end.

“When Lewis led the first restart, I think he went early, then saw the others were close so he slowed up again. But to be honest I love all that stuff now, so it's fine.

“You see cars are locking up brakes, and it can be a bit chaotic, but obviously that gives you so much adrenaline. And when the race is a little bit follow the leader at times, a restart ignites a bit more adrenaline in you.” 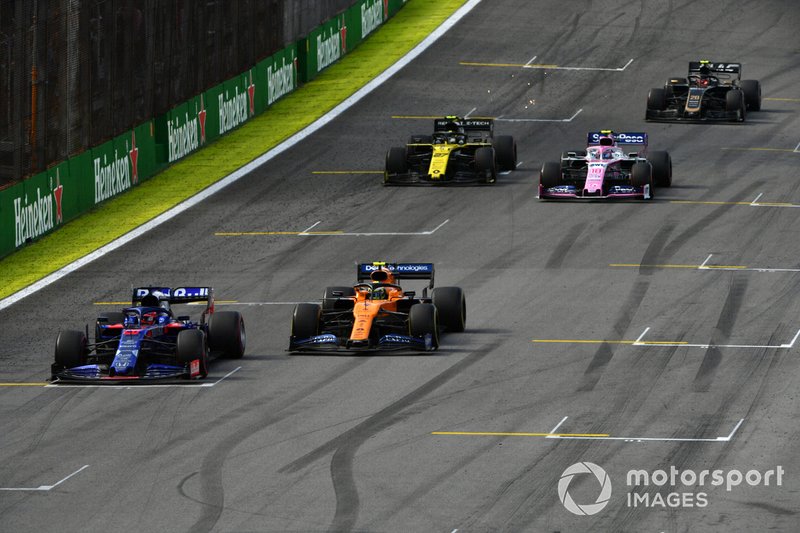