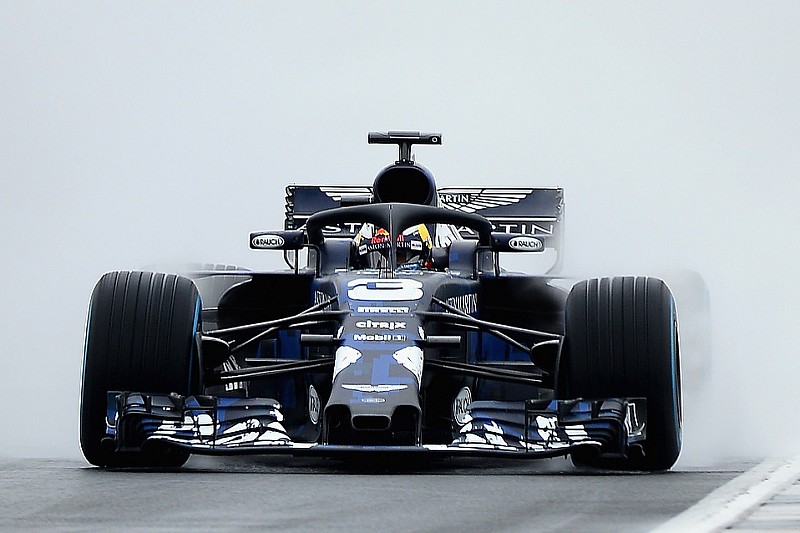 Red Bull says its plans for pre-season testing remain on course, despite Daniel Ricciardo slightly damaging its new RB14 in a filming day crash at Silverstone on Monday.

Ricciardo was giving the team's new 2018 Formula 1 car its first test at a wet Silverstone just hours after the first images of it were released.

But the team had to cut short running before its 100km limit was reached after Ricciardo crashed out in the damp conditions, hitting the barriers at low speed.

Although the Australian escaped unharmed, sources suggest the impact was enough to damage the front of the car, including the suspension, nose, front wing and floor.

With teams normally tight on spare parts at this time of year, such an incident could have compromised preparations for the first official pre-season test at Barcelona next week if replacements could not be readied in time.

But with the team having a week to get back in action, a spokesman confirmed on Tuesday that everything would be fine for Barcelona.

The team will likely accelerate its spare parts programme to ensure that the RB14 is fully prepared for the beginning of testing action next week.

Although not having the perfect first day, Red Bull did get through most of its schedule – including some pitstop practice - and Ricciardo was left upbeat by the early feeling of the car.

Speaking after the test, he said: "It's hard to tell from a couple of laps but the initial feeling in the car is good. I can already feel that the rear feels pretty settled, even in these poor conditions. Those are encouraging early signs."

Ricciardo also reckoned that there were no problems caused by the presence of the halo cockpit protection system.

"So far I can see fine with the halo," he explained. "I'd only done a couple of installs with it before so it was pretty new today but I really didn't notice it was there, which is pretty good. Honestly, unless there's stuff above, I don't see any issues at all on a flat track.

"It's been a long day, trying to get everything going and complete the filming – but a lot better to have that here than in Barcelona."

Moving on up: New entries from Renault F1 and Alfa Sauber promise improvement