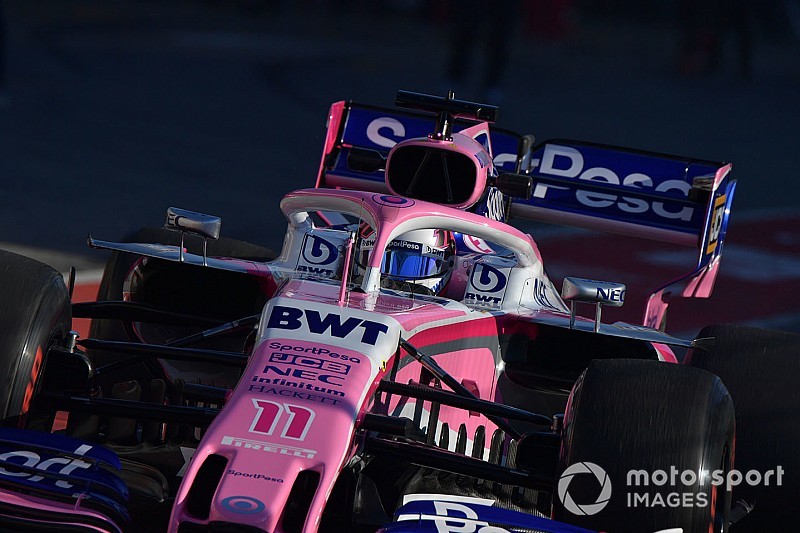 Racing Point Formula 1 driver Sergio Perez has rued a lack of mileage in the team's 2019 car in pre-season testing in Barcelona.

Perez completed just 30 laps on the first day of testing last week, and followed that up with 67 on his second day, before running a further 88 on Wednesday, when he set the second-fastest time behind Carlos Sainz.

With two days of testing left, his total of 185 laps in the RP19 had left him ahead of only the two Williams drivers and Haas development driver Pietro Fittipaldi in the mileage rankings.

“It was a good, solid day,” said Perez of Wednesday. “We need more of this in my final day [Friday].

"I've been really limited with mileage the whole winter testing, so I really hope my final day can be very positive and I can be really good with a good feeling. Every day we are certainly making good progress.

"We're learning every day, not just when I'm driving, also when Lance is driving we are understanding the car. So I think we are heading definitely in the right direction.”

Perez made it clear that the Silverstone-based team - which trails all other teams but Williams in mileage - was expecting to log fewer laps than its rivals.

“We knew coming here that that was going to be the case, we expect quite a different car in Melbourne.

"The more understanding we can get in this car the better.

“I really hope that my final day can be a lot of understanding with different fuel loads, different tyre compounds and so on.”

Racing Point has always made it clear that it would run a basic launch aero package in testing, with a huge raft of updates scheduled for the Australian GP.

Asked if he expected the team to start the season with a competitive car Perez said: “I think so. I think we are more in contention than we definitely were last year.

"So I hope by Melbourne we can be strong, and start the season on a high.”

Ricciardo denies Horner charge of "running from a fight"