John Surtees earned a place in the history books as the only man to win World Championships on both two wheels and four, establishing a record that will surely never be matched. 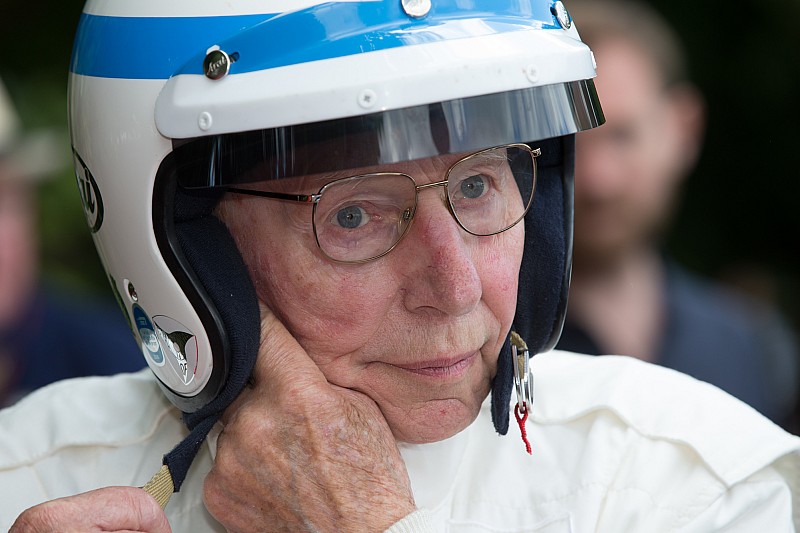 But he will also be remembered for the dignified way he dealt with the tragic death of son Henry in 2009, and for subsequently devoting his energies to raising funds for the charity set up in the youngster’s name.

Over the decades Surtees was awarded an MBE, OBE and – as recently as last year – a CBE. It was a source of frustration to his friends and motorsport enthusiasts worldwide that he never received the Knighthood that his unique achievement deserved.

The word “legend” is often used too readily, but if anyone deserved to be named one, it was Surtees.

Born in Surrey in 1934, Surtees was encouraged into motorcycle racing by his father Jack, who was a racer himself. He began his career in grass track racing at the age of 15, and made his name on Nortons before scoring his first World Championship race victory with an NSU at 250cc level in 1954.

In 1959, tests with an Aston Martin sportscar and Vanwall GP machine at Goodwood convinced him that cars would be his future. He finished second to Jim Clark in his first Formula Junior race in a Ken Tyrrell-run Cooper in 1960, also at Goodwood.

Following some exploratory Junior and F2 outings and an F1 debut at the International Trophy, he was invited to make his Grand Prix debut with Team Lotus at Monaco. He then took an impressive second place on only his second outing at Silverstone, and earned pole in his third race at Oporto in Portugal. All of this was combined with his MV Agusta duties and his final two-wheeled titles.

Giving up bike racing, he opted to drive a privateer Cooper for Reg Parnell’s Yeoman Credit team in 1961, before switching to a more competitive Lola – under the Bowmaker Racing name – the following year. He took pole at Zandvoort and scored two further second places in Germany and Britain, further bolstering his reputation.

Enzo Ferrari offered him a seat for 1963, and he quickly became an integral part of the Italian team, contributing greatly to the Scuderia's car development. He earned his first Grand Prix victory at the Nurburgring that year, also winning a non-championship race at Enna and sharing victory at Sebring with Ludovico Scarfiotti.

The following season, wins at the Nurburgring and on Ferrari’s home ground at Monza helped to him to clinch the world championship with a second place at the Mexican GP finale.

The 1965 F1 season was largely one of frustration, although Surtees logged three podium finishes, and won the Nurburgring 1000kms with Scarfiotti. A huge CanAm accident at Mosport in September was a major setback, and he was lucky to escape with his life.

After a painful recovery, he returned to Ferrari duty in 1966, winning the Monza 1000km with Mike Parkes and scoring a famous wet GP win at Spa. However, his relationship with Ferrari had soured, and he left the team in controversial circumstances early in the season to join Cooper, for whom he would win in Mexico at the end of the year. He also took the inaugural CanAm title, with a Lola T70.

In 1967 Surtees joined Honda, scoring a memorable sixth and final career GP victory at Monza as again he became deeply involved in technical matters. The Japanese company withdrew from F1 at the end of a tragic 1968 season, which saw the death of his teammate Jo Schlesser at Rouen.

Surtees spent an unsatisfactory 1969 at BRM, with third in the US GP a rare highlight. In the meantime, he was putting together plans for his own F1 effort.

He entered a McLaren under the Team Surtees banner for the early races of 1970, setting the fastest lap at Kyalami, while the first Surtees F1 chassis was being built. The new TS7 made its debut at Brands Hatch, and Surtees went on to win the non-championship Oulton Park Gold Cup with it. He also made a brief return to Ferrari in sportscar racing.

Surtees raced the TS9 the following year, with a best result of fifth place in Holland, although he won the Gold Cup again. His teammate Mike Hailwood enjoyed better fortune, and Surtees decided to give up driving at the end of 1971 to focus on running the team.

He would make one final GP start race at the 1972 Italian GP with the TS14, although two F2 wins at Fuji and Imola showed that he could still get the job done.

That year Hailwood won the European F2 title in a works Surtees, and the former bike racer would continue to be the mainstay of his old pal’s F1 team into 1973, when he was joined by Carlos Pace and Jochen Mass, who who form the team's line-up in 1974.

In 1975 Surtees focussed on a single car for John Watson, and the following year he ran future world champion Alan Jones. However by the end of 1978, following two disappointing seasons with Vittorio Brambilla and in the face of increasing financial pressures, he decided to pull out of F1.

He remained close to the sport, taking part in historic events, notably in the early years of the Goodwood Revival, and supporting young drivers – especially son Henry, who was born in 1991, and showed great promise as he worked his way up the ranks.

Henry's death in an F2 race at Brands Hatch in July 2009 was a terrible blow to John and his family, but in the aftermath he devoted himself to raising funds for the Henry Surtees Foundation, which supports regional air ambulance services in the UK.

Motorsport.com would like to offer its condolences to John’s family and his many friends in all areas of the motor sporting world.