Lando Norris says competing against Mercedes and Red Bull during Formula 1’s Austrian events made him realise “it’s not like they’re not raceable”, while responding to Lewis Hamilton’s in-race compliment.

Hamilton and Norris fought over second place during the opening stint of last weekend’s Austrian Grand Prix at the Red Bull Ring, following the McLaren driver’s controversial clash with Sergio Perez, which left the Red Bull driver in the gravel and Norris handed a penalty.

After Norris had defied Hamilton for 15 laps, the younger Briton defending harder and longer than he had against Valtteri Bottas and Perez during the preceding Styrian GP at the same venue, the world champion said, “great driver, Lando”, over his team radio after passing by.

Norris eventually repassed Hamilton when the Mercedes driver’s pace slowed after he picked up damage to his left-rear brake duct when running heavily over a kerb but finished third behind Bottas (and dominant winner Max Verstappen) as he fell behind the Finn when his penalty was applied at his pitstop.

When asked by Motorsport.com how it had felt racing against the Mercedes and Red Bull, as well as his reaction to Hamilton’s radio message, Norris replied: “Thanks. I don’t know what to say.

“It was tough, it wasn’t easy. Like, the whole of the first stint I think both Mercs were quicker than me, which was not a surprise, something I was expecting, but to hold them off as well as we did was a little bit of a surprise and for that long into the race.

“But it was like it was the first time I’ve really raced against him.”

Norris also explained how the battle had allowed him to witness Hamilton’s driving close up for the first time in his F1 career, with his McLaren squad having one of its strongest showings in recent seasons after Norris beat both Mercedes and Perez to qualify second behind Verstappen. 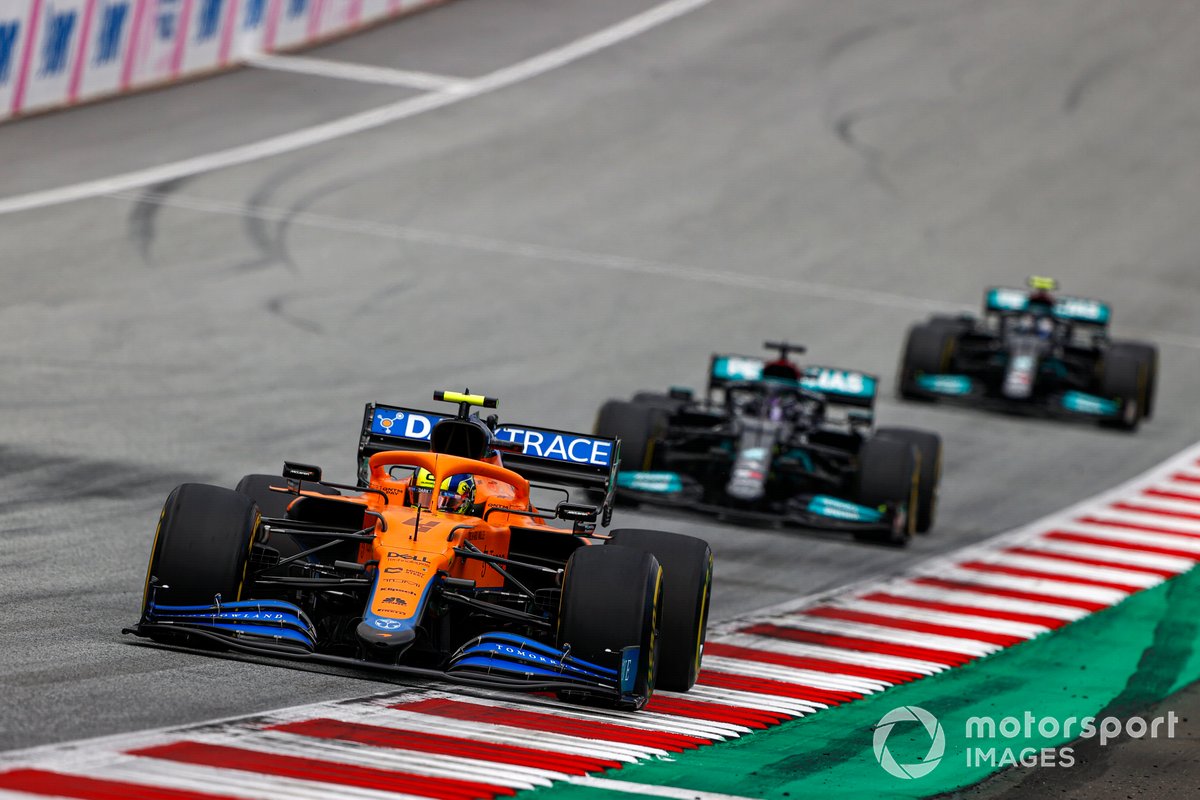 McLaren’s form for the second Austrian race was even stronger than it had been in the Styrian round, where Norris started third (after Bottas’s penalty for spinning the in the pitlane in FP2 had been applied) and finished fifth.

The team utilised excellent straightline speed and corner exit traction, as well as key updates added to the floor of the MCL35M, as well as fine-tuning its set-up and tweaking its strategic approach following the Styrian race.

“You get to learn how he drives and how he races – as well as learning from Valtteri and how he approaches things – when there are risks taken and things like that,” Norris said. “Like, as much as I appreciate the kind words, it’s not like he was driving perfectly.

“There were still times he ran wide out of Turn 1 or made a mistake in Turn 3. It’s not like they’re not raceable. You kind of get there and when you have the car to perform and do well, you realise you have a chance against them.

“It’s hard to ever say that until you’re actually racing against them and your car is there and you’re going head-to-head. Normally, they’re way too far ahead of me, so it was cool.

“It’s a good feeling to race against not just Lewis, but Valtteri as well and Max and Sergio. To be in that pack and say we’re fighting for a podium because our pace is just that good, was a really good feeling.”