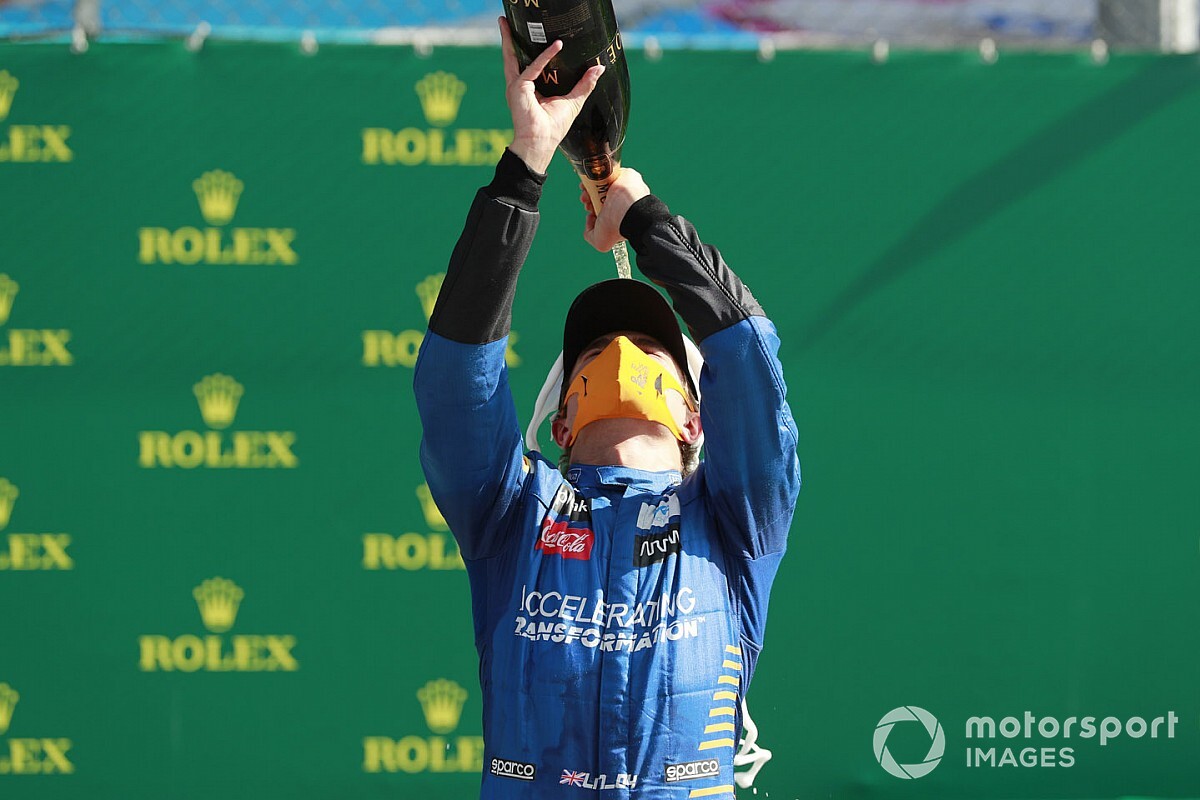 McLaren believes Lando Norris' charge to third place in Sunday's Austrian Grand Prix proves he has "made the next step" as a driver.

Norris scored his first F1 podium at the Red Bull Ring after a late charge saw him pass Sergio Perez before making up the time to cash in on Lewis Hamilton's five-second penalty.

It saw Norris become the third-youngest podium finisher in F1 history, capping off an impressive weekend that saw him qualify fourth and spend much of the race leading the midfield runners.

McLaren F1 boss Andreas Seidl said it was proof of the advancements Norris had made entering his second season on the grid.

"For a driver it is important to create this momentum for himself as it gives him the confidence he needs to pull it off when it matters in qualifying and the race," Seidl said.

"Lando was simply building it up as he started well last year. You could see that last year in his race starts when he started carefully at the beginning, and then once he had a bit of confidence and races under his belt, he was there.

"With the work he has done together with his team over the winter, I think he simply made the next step.

"I am very happy, very happy with the team, so we can have some great results with him in the future."

The final lap saw Norris gain 0.8 seconds on Hamilton by setting the fastest lap of the race, allowing him to snare third by less than two tenths of a second in the final classification.

On-board footage of Norris' final lap has gone viral on social media in the aftermath of the race, with his race engineer instructing him when to use the overtake button before celebrating the result once Hamilton's penalty was confirmed.

"At some point we all thought we missed the podium when [Charles] Leclerc went through, but obviously we were communicating the gaps to Lando about Lewis," Seidl explained.

"Then when he got his penalty, Lando was prepared for his last laps in terms of getting the maximum of everything that the car had.

"[For] Lando to pull it off like that is impressive, and if you look now at the whole weekend, it is impressive what Lando has done. It also shows that as we expected from him, he developed, or made the next step as a driver, which you would also expect after your rookie season in Formula 1.

"He did very well in analysing last year's season and looking into how he could be even better prepared going into this next season. He grew up in terms of personality and character.

"How he was approaching the first race of the season, I was very impressed. I am sure we will have a lot more fun with him in the future."

"We were very fast yesterday but the race pace they were for sure quicker. They have a nicer car to drive, a bit more downforce and that helps in the race with the tyre degradation.

"It was very difficult but I think when I had the clear air, and I kept the tyres in a good condition, then I could really lean on it and the car came alive a bit.

"We turned up the power a little bit and I put in some really nice laps. I'm still out of breath from trying so much to finish where I did."