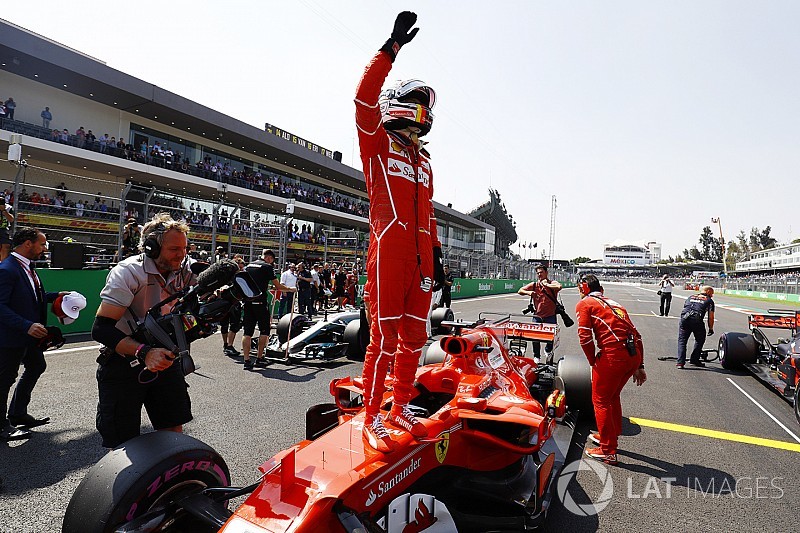 Verstappen was quickest on the first runs in Q3 with a 1m16.574s, but lapped three tenths slower on his final attempt.

This allowed Ferrari driver Vettel to snatch pole with a lap of 1m16.488s, having been just over a quarter-of-a-second slower on the first runs.

Lewis Hamilton was third fastest for Mercedes after a moment in the Turn 12 right-hander cost him time in the final sector, meaning he had to rely on his first-run time.

This put him ahead of teammate Valtteri Bottas, who posted a lap good enough for fourth having had to abandon his first run without setting a time.

This was because of a lock-up at Turn 13 after passing the slow Verstappen, who is being investigated by stewards for impeding.

Kimi Raikkonen was fifth ahead of Esteban Ocon, with Daniel Ricciardo failing to improve on his final lap and ending up seventh.

Williams drivers Felipe Massa and Lance Stroll were the only drivers among the five eliminated in Q2 to post a time.

Massa ended up 11th, missing out on a place in Q3 thanks to lapping 0.231s slower than Perez.

Stroll was over a second behind his teammate in 12th, with much of the time lost with a scruffy run through the stadium section late in the lap.

Brendon Hartley, on his second F1 appearance for Toro Rosso, reached Q2 for the first time but ended up 13th thanks to stopping with a loss of power exiting Turn 3 on his first flying lap.

With Alonso and Vandoorne carrying grid penalties of 35 and 20 places respectively, McLaren opted not to mount a serious assault on Q2 with both drivers completing a token run without attempting a flying lap – leaving them 14th and 15th.

Sauber duo Marcus Ericsson and Pascal Wehrlein were fastest of those eliminated in Q1 in 16th and 17th place respectively.

Both did three runs in Q1, but Wehrlein was bumped into the drop zone by Vandoorne late on, moments before Ericsson jumped ahead of him.

Wehrlein did not improve on his final lap but still ended up ahead of Haas duo Kevin Magnussen and Romain Grosjean, who also both squeezed three runs into Q1.

Toro Rosso driver Pierre Gasly did not run in qualifying on his return to Formula 1 action after engine problems struck in free practice three.

The 21-year-old already carries at least a 15-place grid penalty thanks to power unit component changes made on Friday, and completed only 12 practice laps on his first appearance at Mexico City.