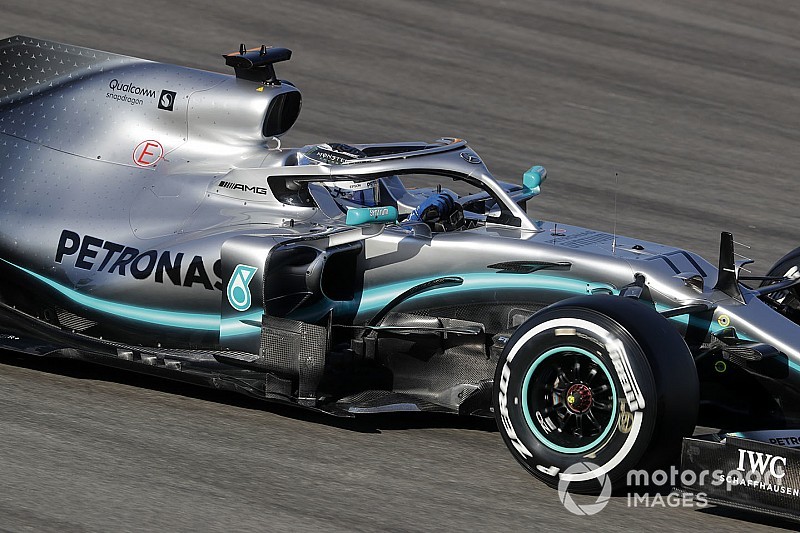 Valtteri Bottas says Mercedes still needs to find more from its latest aerodynamic upgrade if it is going to be able to compete with Ferrari at the start of the season.

Mercedes introduced a major aero update for the start of this week's second test, following a low-key start to its preparations at Barcelona last week.

But while Bottas is convinced that the revamped wing and nose have delivered a step forward in overcoming some of the handling issues that marred the first test, he thinks the team is not yet in a position where it can be confident of matching Ferrari.

"It is better. But if it's enough, that is the big question mark," explained the Finn. "I definitely feel improvements since last week with the stability of the car, and with the overall downforce of the car.

"But we definitely feel that we haven't unlocked everything that there is to unlock.

"We do still need to make improvements for sure but at least we have some time after testing to again learn more for Australia."

Although Ferrari had a setback to its testing programme this week when a wheel rim issue triggered a big crash for Sebastian Vettel, the Italian team has continued to impress with its pace.

Bottas said that his opinion from last week that Ferrari was in front had not changed.

"They still seem strong. Obviously as always from testing to Melbourne, a lot of things can change but they do have a strong package.

"I still think we do need to unlock more from the new package to be able to really compete with them properly."

Having revealed that Mercedes' main issue from the first week was in finding a consistent balance for a whole lap, Bottas said that progress had been made on this front with the new aero update

"From last week to this week, definitely we have been able to improve the overall balance of the car, and the differences in the balance we had through the speed range," he said.

"We've been able to improve overall grip, downforce, and stability. But all those areas, we can still do better.

"It's not the perfect car yet. Definitely we feel the potential is there. Maybe it's another car that has quite a small sweet spot, but once you hit it it can be very quick.

"We are learning massively every day, I feel like it's been a good step, every time I get back in the car it gets better. I hope I can feel that again this afternoon and tomorrow and hopefully for a bigger step in Melbourne."