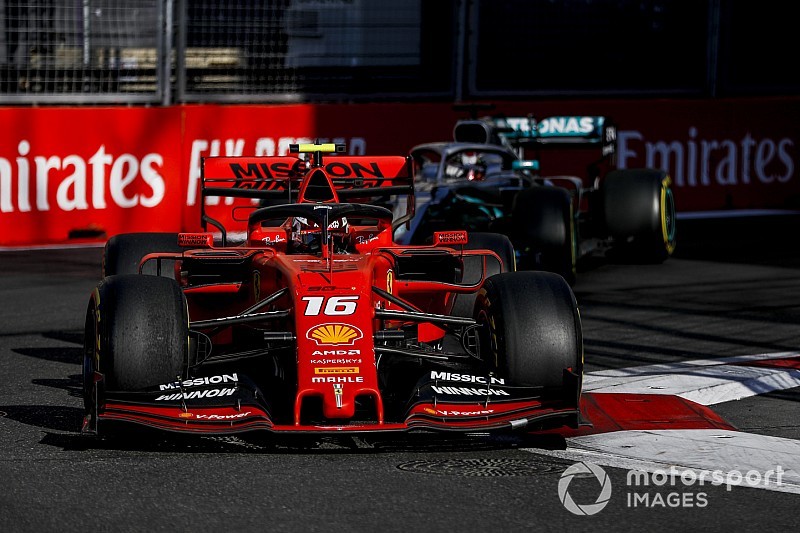 Ferrari team boss Mattia Binotto says Mercedes currently has a "slightly better" Formula 1 car, but insists the gap between the two squads in the championship is not representative.

Ferrari's new SF90 was the benchmark in F1's pre-season testing in Barcelona, yet it was Mercedes instead that picked up four consecutive 1-2 finishes to begin the campaign, becoming the first-ever F1 team to do so.

The Scuderia's patchy start to the season, which included newcomer Charles Leclerc being denied a likely win by an engine issue in Bahrain, has left it with only 99 points to Mercedes' 173.

Mercedes team boss Toto Wolff has acknowledged that the current gap "flatters" his team's W10 in relation to the SF90, and his counterpart at Ferrari is of a similar opinion.

"I think that, four races in the season, no win for Ferrari, four wins for Mercedes, no doubt that they are very strong, and certainly they've got, let me say, a slightly better car," Binotto said after the Azerbaijan Grand Prix,

"But I think that the gap is not so big, and the points and the results are not reflecting the true potentials of the cars."

Leclerc topped all three practice sessions at Baku, and looked in a league of his own at the Azerbaijan-based street circuit before a qualifying shunt dashed his hopes of victory.

Teammate Sebastian Vettel put "a bit of pressure" on the Mercedes cars in the race, but ultimately finished over 10 seconds behind second-placed Lewis Hamilton.

"I think that if you've got a car fast enough to score potentially the pole, you've got a good car overall," Binotto said.

"In the race, yes, we were not as fast as them, but we didn't finish 20 seconds behind, I think that Seb somehow at the end of the race was quite close, and if you look what the delta, laptime average, on the race, is significant but still little. I think it's something on which there is much to try to work and to close in in the near future."

Leclerc, who recovered to a fifth-place finish in the race after his qualifying error, reiterated his belief that he "threw away" a great chance.

"Fifth place, obviously, when I'm looking at FP1, FP2, FP3 and qualy - even though obviously FP1, FP2, FP3 is not very representative - I am disappointed because I felt great in the car," he said.

"I completely agree with Mattia - I think in the car there was definitely the potential to do pole position and I threw all our chances away by touching the wall. So it's my mistake, I take responsibility, and basically it [fifth place] was the best we could do from there.

"It's a bit disappointing, but on the other hand I think there are some positives to take away from the weekend.

"I think qualy pace was definitely stronger than China and race pace was also very close to Mercedes, so yeah, now we look forward and I'm pretty sure we'll come back even stronger in Barcelona."