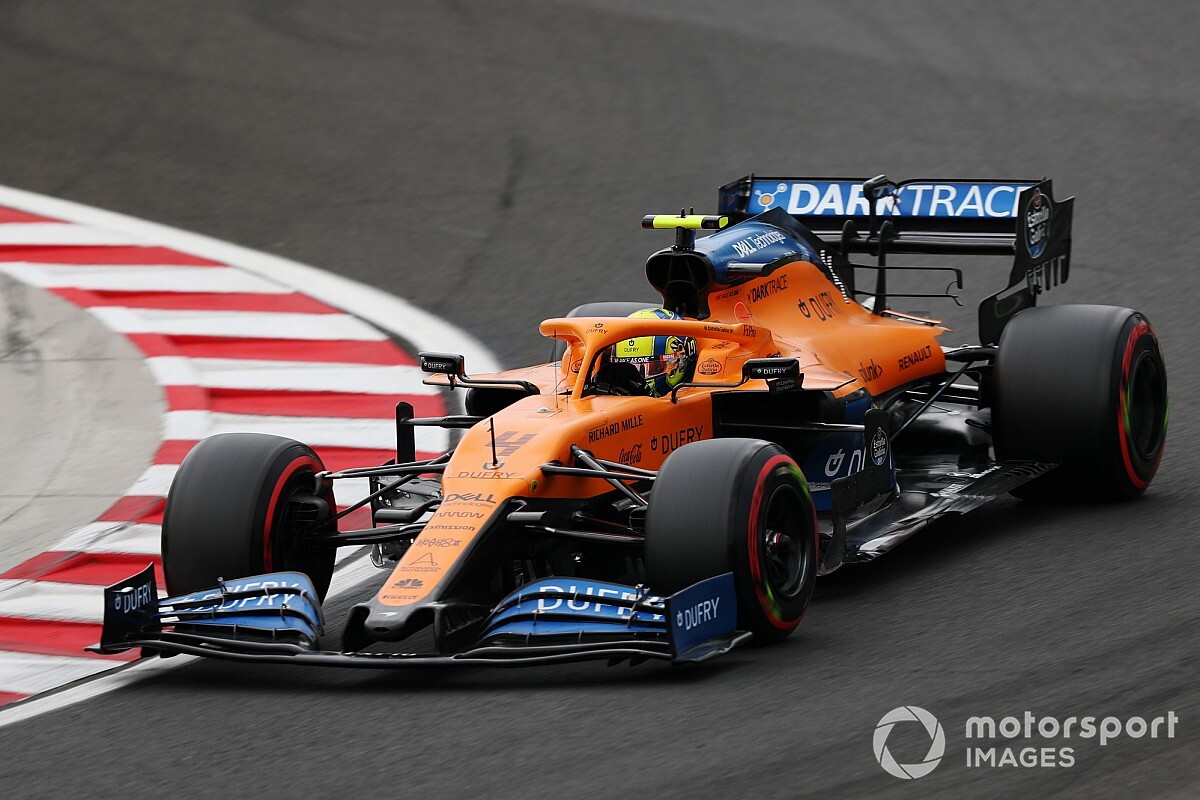 Norris currently sits third in the drivers’ championship, aided by his first podium finish at the season-opener in Austria before a late charge to fifth last weekend at the Styrian Grand Prix.

But after leading the midfield in each of the first two races, McLaren slumped to eighth and ninth in qualifying on Saturday in Hungary, with Norris believing it acted as a more representative showing of its current pace.

“We did a very good job in the first two weekends, and we outscored a lot of quicker cars, but I think today was more realistically where we should have been,” Norris said after qualifying eighth.

“I’m happy to be as close as I was to a couple of the cars ahead of us, but I think this was where we expect to be, unlike the first two weekends.

“It’s not a shock. I don’t think I’m disappointed in any way, I don’t think my lap would have put me a load of positions up or anything. For once, I’m kind of happy that I’m P8.”

Sainz qualified a career-best third last time out in Austria, but explained that the high-downforce nature of the Hungaroring had exposed some of the weaknesses in the McLaren MCL35 car as he dropped to ninth on the grid.

“It’s representative of where we are on a high-downforce track,” Sainz said.

“[With] the peak downforce of our car and the grip of our car on a circuit like Hungary, I think we’ve been a bit more exposed than in Austria where there was more of an efficiency track in terms of trading high-speed balance with the straight-line speed.

“So definitely [on] a high downforce track, we have some work to do.”

McLaren has been leapfrogged in the pecking order by Racing Point and Ferrari, which locked out the second and third rows of the grid respectively.

But Norris said McLaren was not surprised to lose ground on both of those teams.

“it’s not as good as Austria, but we were never really expecting to be as good,” Norris said.

“We knew Ferrari was going to make a decent jump coming to this track, so I’m not too disappointed. It gives us a chance to find out a bit more of our weaknesses, instead of thinking how good we were over the last two weekends.

“It’s given us a chance to see where we still really need to improve compared to other teams. Compared to some, we’ve made good improvements, compared to last year. That’s the main positive.

“It was a positive compared to where we started the weekend. I think we weren’t the happiest as a pairing of Carlos and myself with the car, and I think we made some good changes overnight and into today.

“We were happy to get into Q3 and do what we did.”

Mercedes drivers surprised by gap to Red Bull in Hungary