McLaren CEO Zak Brown says Ferrari's arguments against a major budget cap reduction to save smaller teams are ‘contradictory’ and ‘don’t stack up’.

Ferrari has made clear it is against a plan to reduce F1’s planned cost cap much below a $145million level, with some outfits like McLaren wanting it brought down to as little as $100million.

The Italian team’s boss Mattia Binotto told the Guardian newspaper on Thursday that it was against such a cut back because it did not want to get rid of staff or have to deploy them to other racing activities. He also suggested that if smaller outfits were struggling to be able to compete, then Ferrari would happily offer customer cars.

But Brown has been left unimpressed by Ferrari’s stance on an issue where he thinks F1’s future could be put at risk if it does not get a grip on bringing down budgets.

“We are in a situation where if Formula 1 goes by its old habits, we're all at extreme risk for the future of F1,” Brown told selected media, including Motorsport.com during a conference call in the wake of Binotto’s comments.

“And I think if we think forward and get with the times, we can not only survive what's going on right now, but I ultimately think the sport can can thrive and we all win. I'm all for a good healthy debate. But I think the comments that I'm being seen put forward don't stack up, contradict themselves, and don't accurately reflect what I think is reality.”

Brown thinks it is nonsense to suggest that F1 will lose its place as the pinnacle of motorsport if the budget cap is cut to $125 million, and he is upset at suggestions that teams are not just there to make profit.

“Unfortunately, there's not many teams, if any, turning a profit,” he said. “I don't believe that the people involved in Formula 1 are involved to drive a profit: I think they're there to drive franchise value.

“Each team has a different reasons why they're in F1. And a lot of that is to deliver value to other businesses, whether that's in the drinks business or the road car business.” 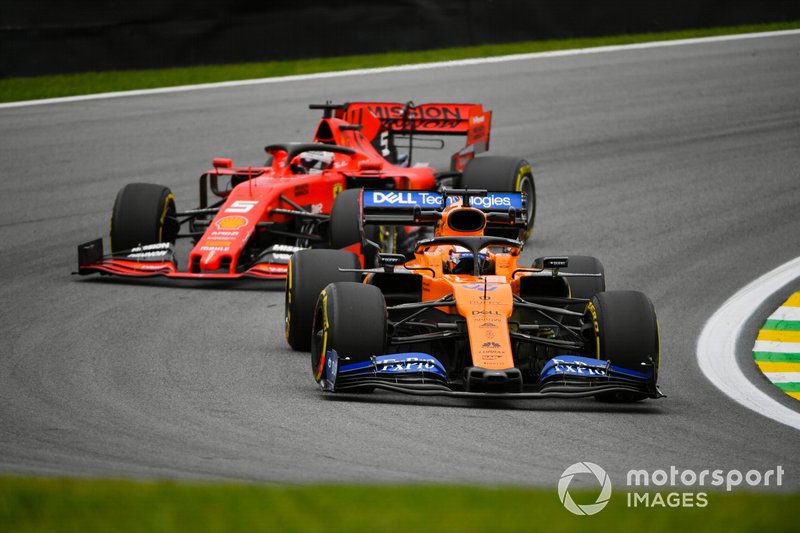 He says he has also been left speechless at suggestions from Binotto that F1 should take its time in deciding on cost cut measures. He says such a stance does not make sense at a time when governments are rushing to take emergency measures to save the world’s economies.

“I'm almost at a loss of what you say to that,” he said. “I think we all recognise that in modern times we're going through the biggest crisis the world has seen. You have countries shut down. You have industry shut down, and to not be in a hurry to address what's going on, I think, is a critical mistake. It's living in denial.

“I think you would find pretty much every president or prime minister or CEO around the world is operating in a hurry to tackle this issue head on.”

Brown also thinks the idea of F1 accepting customer ideas is something that belongs to the 1970s rather than modern-day sport.

“The last time there were customer cars, I believe, was the 1970s. So, for Formula 1, which is all about being a constructor, I don't see how that potential solution is consistent with other comments that the DNA of F1 is a constructors' championship and technology evolution: that feels like a solution from the ’70s.”

Brown says the majority of other teams support his outfit’s stance that the budget cap must be brought down more, and he has faith that the sport’s rulers will act on behalf of what most teams want: rather than bowing to Ferrari’s stance.

“Ultimately that's one for the FIA and F1 to stand behind, but I don't believe they can hold back if there's enough of alignment and veto, if you'd like, over what's being proposed.”

F1 CAN SURVIVE WITHOUT FERRARI

And while Brown says he would not like to see Ferrari turn its back on F1 if the Italian outfit decided the changes were not to its liking, he says the bigger issue for the sport is that it does not lose a number of smaller outfits if the budget cap is not brought down.

“However, I think the sport can survive with 18 cars on the grid. And I think there are other power unit manufacturers that could cover the two [customer] teams that are currently powered by them. On the flip side, I think if we land on a budget cap too high and that ends up turning off those that are putting their hands in the pocket investing in F1, I don't think F1 can survive with 14 cars on the grid.

“I think 16 is right on the line, with 18 it can. So I think it could survive without them, but I really much prefer to have them stay in the sport. I think the sport’s much better off with them than without.”

Top 10: Racetracks we’d like to see back on the F1 schedule

F1 could have "raced safely" in Australia, says Szafnauer