Grosjean and Magnussen made contact at the Turn 6 hairpin late on after Magnussen moved to the inside of Grosjean through the corner on lap 56 of 64. Light contact meant both drivers were able to continue and Haas scored a double-points finish with Grosjean leading Magnussen home in ninth, but both drivers were placed under investigation.

When asked if the drivers could have thrown away a team effort by clashing again, Magnussen said: "I don't know. We don't have a rule that we are not allowed to race each other.

"It's very clear I was on the inside, it's not like I was diving on the inside, and then he chooses to turn into me. I don't know what he was doing."

Grosjean was asked for his take on the incident and said: "I won’t comment on that one. We got lucky."

But, later, he told a TV crew: "I guess we are going again to Gunther's office. But on that one I think I was ahead, and it's a bit of a shame."

The German GP incident followed the Haas drivers clashing twice last time out at the British Grand Prix. The incident led team boss Gunther Steiner to say he was "not over" the incident as late as Thursday in Germany.

When Magnussen was asked if the relationship between him and Grosjean had deteriorated, the former McLaren driver said: "I respect him a lot.

"I think these incidents could be avoided. There are other areas where we can work very well as teammates, so we need to get over this." 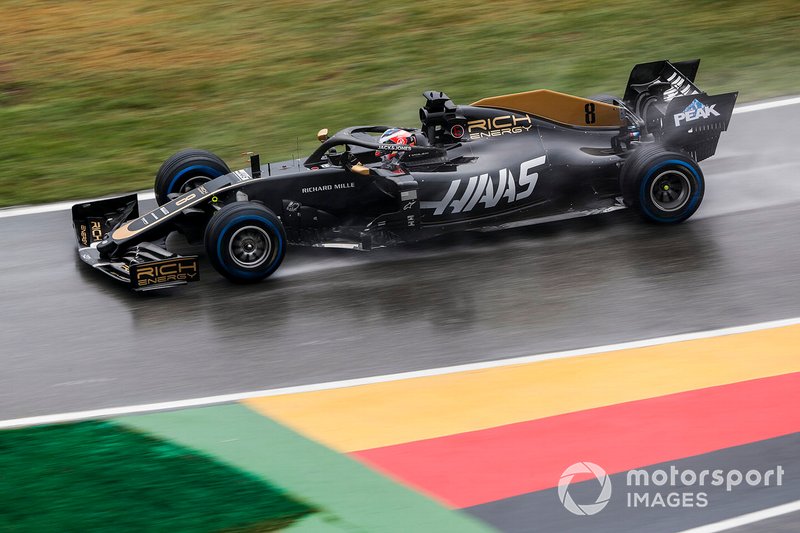 Grosjean described his Australian Grand Prix-spec Haas as an "old lady" and said it was "crazy" to be able to compete for points with an older car set-up.

Teammate Magnussen ran the latest specification as Haas continues to experiment with car specification to resolve its inconsistent form.

Asked by Motorsport.com if the wet conditions had hurt its data return, Grosjean said: "We had 15 laps in the dry so the guys can take [information] from that, maybe the sensors are covered with the rain, so I don’t know if we will get everything. There’s more to learn."

He continued: "I’m very happy with this car, it’s missing a lot of downforce - don’t get me wrong.

"On a new tyre you can do the job, but obviously the new tyre effect is gone [later in the stint] and it’s harder because it’s a nine-month-old car. But the feeling in there is very good."