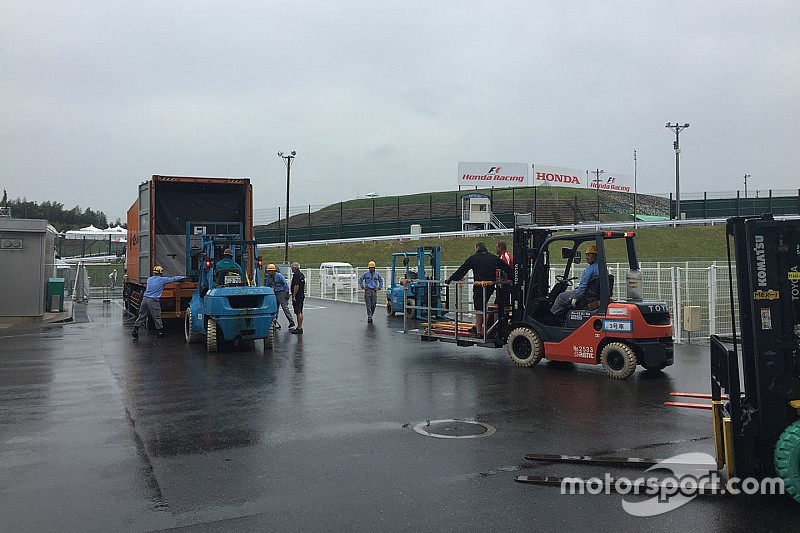 Lotus is hopeful that its latest financial drama, which meant freight arrived late at the Suzuka track, will not hamper its running at the Japanese Grand Prix.

A payment delay meant much of its freight only arrived at Suzuka on Thursday afternoon, leaving the team facing a long night to get ready for opening practice. The team has also been locked out of its designated hospitality unit until it pays an outstanding bill.

Pastor Maldonado was confident that, despite the troubles, the team should still be ready to join track action on Friday morning.

"It is not easy, as we are a bit late with the stuff. But we should be okay," he said. "We are trying to sort all the problems and I am sure the team will work really hard to have everything well set.

"And from my side, for tomorrow and the rest of the weekend, we just want to do our best on the track and get back in the points."

Romain Grosjean, who is poised to leave Lotus at the end of this year and join the new Haas outfit, said that while the situation was difficult, the most important thing was that the staff were pulling together to get through things.

"We are here," he said, having been forced to host his media commitments in the middle of the paddock.

"Things are turning up late, but the most important thing is that our group of people are still here."

While waiting for the freight to arrive, and being locked out of hospitality, Lotus mechanics had to have takeaway pizza for lunch.

Grosjean himself went to Renault.

"It is quite good actually to see the hospitality you get in the paddock when you are running out of food and they open their door," he said.

"It is quite nice, we had lunch somewhere different from usual. Hopefully it should all be sorted – the most important is that we have what we need to race."

Grosjean was also confident that despite the extra difficulties the late arrival of freight had caused, it should not impact negatively on its prospects for the Japanese weekend.

"It doesn't mean we cannot fight for the podium this weekend," said the Frenchman. "Look at Spa: we had bailiffs in the garage and we were on the podium, so I think when we start like that we are normally pretty good.

"It is just not nice for Enstone. We are just awaiting confirmation about the future of the team, but the main thing is the spirit is there. What we want is to race and race hard and go for it."