Leclerc will adjust F1 driving if Verstappen move is allowed

Ferrari Formula 1 driver Charles Leclerc says he’ll adjust his approach to battling other cars if stewards stick with their decision not to penalise Max Verstappen in Brazil.

After Verstappen kept Lewis Hamilton behind by edging him off the road at Turn 4 in last week's race at Interlagos, the stewards opted not to open a formal investigation into the incident during the race, in which Verstappen eventually finished second.

However, Mercedes subsequently submitted a request of a right to appeal triggered by video evidence from Verstappen's forward facing camera that was not available to the stewards at the time.

Leclerc says if the stewards do not now sanction Verstappen he will adjust his driving, just as he did after his own incident with the Dutchman at the 2019 Austrian GP.

On that occasion Verstappen went unpunished after forcing his way by and nudging Leclerc off the road in the closing laps of the race before going on to take victory.

"You always need to adapt to every situation, every decision the stewards are doing," said Leclerc. "As soon as I knew that it wasn't a penalty for Max in Austria, I came to Silverstone and I changed my driving.  So I think that's a bit the same for every driver, we will always try to race at the limits of what we're allowed to do.

"And that's what I will do if in case these these things are allowed.

"Austria it was a bit of a different situation again, and after that we could race a bit harder, which I think was good for F1, for the show. This situation was another one. I'll leave it to the stewards to just see what they think." 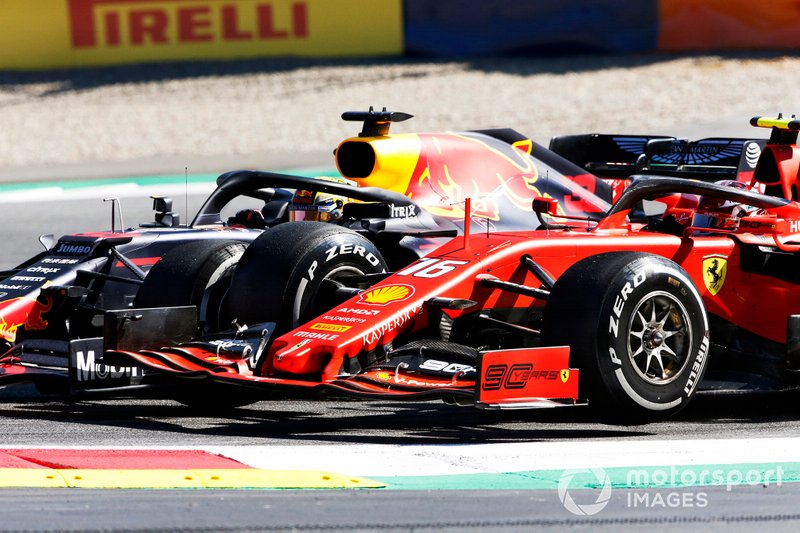 Leclerc insisted he had no preference in terms of outcome.

"Honestly, I really don't mind," he said. "But whatever is allowed, then I just want it to be clear as a driver. That's the only thing that matters to me.

"If this is allowed, then overtaking around the outside is going to be very difficult.

"But yeah, whatever the situation, the decision is, I'll just adapt my driving to it; so I'm fine with both."

"A driver uses every opportunity to his advantage," he said. "To know well if this hasn't been penalised at the last race, if I'm in a similar position, I know I can do something similar.

"I mean, lately it's been a bit more like that. But if you really put your view back into for example, Austria [this year], then you there's a couple of things to review.

"What happened in Austria actually is with some cases is very similar. So yeah, I'm sure there will be some conversation in drivers' meetings just to clarify a bit."