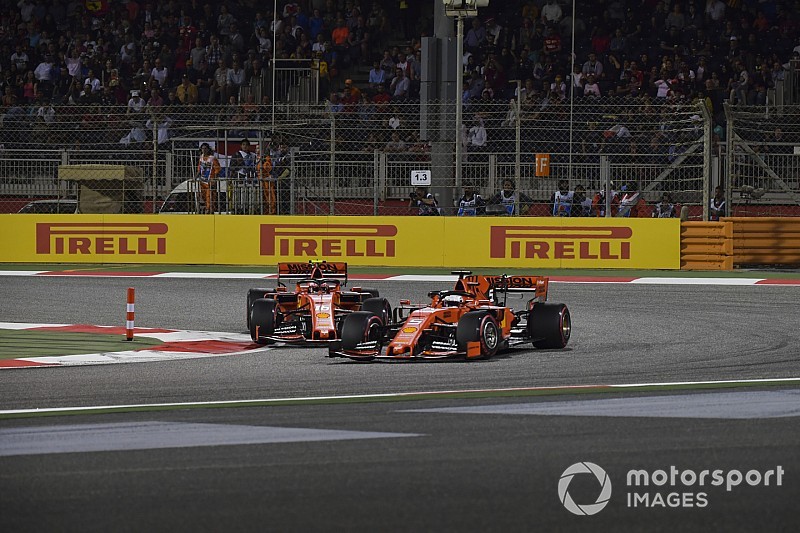 Ferrari Formula 1 driver Charles Leclerc has explained why he defied his team's instruction to stay behind Sebastian Vettel in the early stages of the Bahrain Grand Prix.

Leclerc had slipped behind Vettel and the Mercedes of Valtteri Bottas at the start, but swiftly cleared the latter and was soon all over Vettel, who had been struggling with this car.

The Monegasque informed his team that he was quicker and soon went around the outside of his teammate at Turn 1 despite having received the instruction to "stay there for two laps" a few corners prior.

Quizzed about this situation at the next F1 grand prix in China, Leclerc pointed out that he had obeyed the order to stay behind Vettel in the closing stages of the season opener in Melbourne.

"I think as I showed in Australia, the interest of the team is extremely important, but in this particular situation I think I had quite a big pace advantage at this moment of the race," he said.

Team boss Mattia Binotto said in the build-up to the season that Ferrari would prioritise Vettel over Leclerc in certain race situations, but the Monegasque had the edge on Vettel all throughout the Bahrain weekend.

Asked about the instruction to Leclerc and his subsequent defiance, Vettel said he had not heard the radio exchange but added that he's "not surprised" by the his teammate's decision.

"I think it was quite clear he was quite a lot faster at that point," Vettel said. "I could have passed him back on the next straight, but for me, the way I judged it at that point it was going to lose me more time and him more time.

"The race was very long from that point onwards, something as I said didn't go exactly my way on that Sunday. So at that point it wasn't about trying to hold up or destroy Charles' Sunday back."

Leclerc has insisted that his relationship with his four-time world champion teammate has "not at all" changed because of how the Bahrain weekend panned out.

"At the end, from the beginning, we both want to beat each other and I think that's normal like in every team, you always want to beat your teammate who has the same car as yours," he said.

"On the other hand I think we have found a very good compromise by competing with each other on the track and working together when we are getting out of the car, which is extremely important for the team and for the development of the car.

"So, yeah, I think we found the right compromise but nothing has changed."

Ricciardo trying to be "too clever" with set-up

Ricardo Rosset: Underrated? Or one of F1's least-impressive drivers?