Lando Norris now agrees with McLaren’s decision to run soft tyres at the Formula 1 Emilia Romagna Grand Prix restart – which secured a podium finish – despite not being confident with the call at first.

By:
Haydn Cobb
Co-author:
Alex Kalinauckas
Listen to this article

Norris had been in third place for the restart on lap 35, after the race was red-flagged following a clash between George Russell and Valtteri Bottas, tucked in behind leader Max Verstappen and Ferrari’s Charles Leclerc.

After Verstappen had nearly spun at the restart, it meant Leclerc didn’t find a useful tow behind the Red Bull driver and, coupled with excessive wheelspin starting on medium tyres, Norris took advantage on the softs to pull alongside Leclerc and claim second place.

Despite losing second place to a recovering Lewis Hamilton late on, Norris still secured the second podium of his F1 career in third place after maintaining performance in his soft tyres to the finish.

After the race Norris admitted he hadn’t been confident about using the softs for the restart but thanked his team on the decision which saw him keep clear of Leclerc in the closing stages.

“We made the decision to go on the softs and I wasn’t so confident to get the tyres working and it is not an easy track to overtake on, but I think it was the right decision,” said Norris. “Apart from Max’s little moment, I thought Charles was going to drive ahead of Max on the restart as he was off-track but he didn’t take advantage of that. [After that] He had a lot of wheelspin on the restart when Max went and that is the fault of the mediums and their decision.

“We made the decision to go on the softs and we got a good launch, good restart and got ahead of him. I started saving the tyres from lap one after the restart knowing that the last couple of laps are going to be tough and they were especially with Lewis at the end.

“It was a nice little battle and nice to be racing unusual cars for us – Red Bull, Mercedes and Ferrari – so it is nice to go up against them. Hopefully we can have some more of that in the future.” 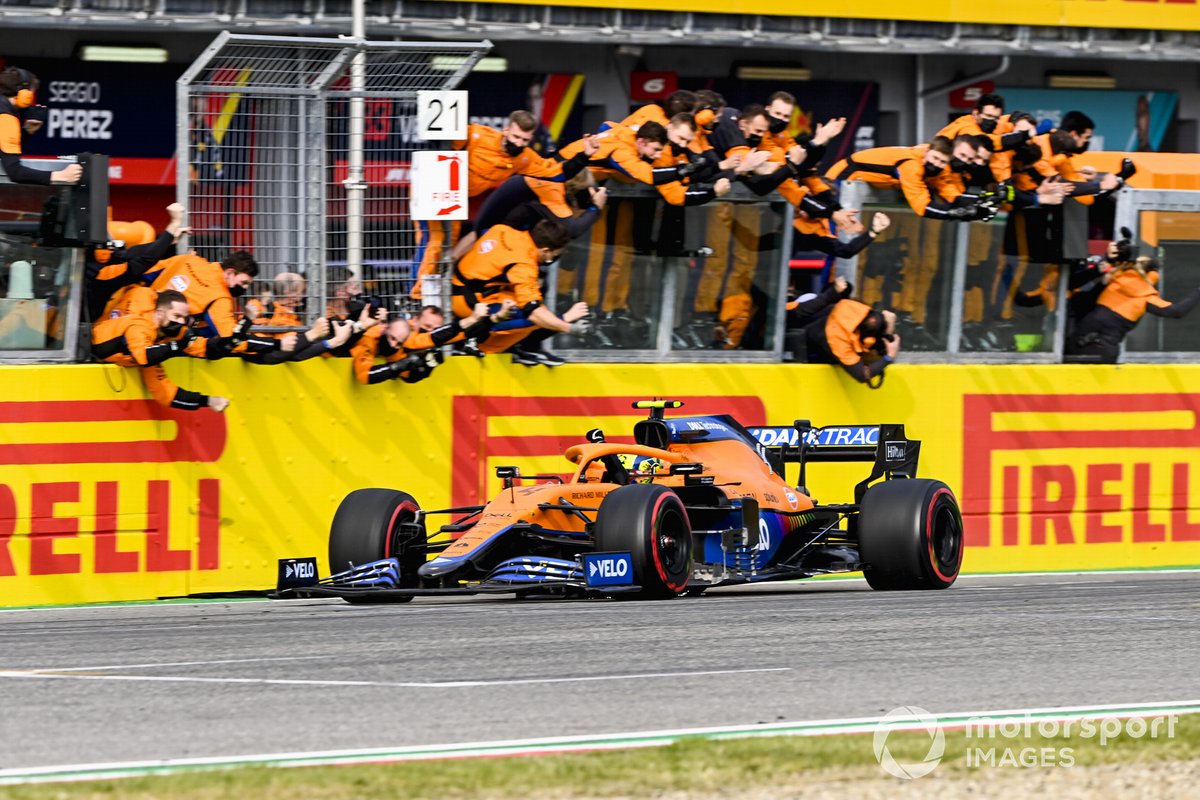 A podium capped an eventful Imola weekend for Norris, who was denied his best-ever F1 qualifying result of third place when his best lap in Q3 was deleted after he exceeded track limits at Turn 9, dropping the McLaren driver to seventh place.

Aside from the Q3 mistake, which Norris insisted on taking the full blame for, the 21-year-old was delighted by his race weekend having moved up to third place in the early F1 world championship standings.

“On the whole I am pretty pleased both for the team and for myself, apart from Q3 it was a pretty perfect weekend,” he said. “We improved the car a lot over the past couple of days from Friday into Saturday going through the sessions and we didn’t start on the best foot but we improved a lot.

“I felt I did a very good job in qualifying and gave myself an opportunity in Q3 and to be pretty close to pole position. Effectively P3, then get put P7, so it was near-perfect from my side and the team’s so I was disappointed. So, to come back to third today after a pretty eventful race was rewarding for myself but more importantly for the team.”