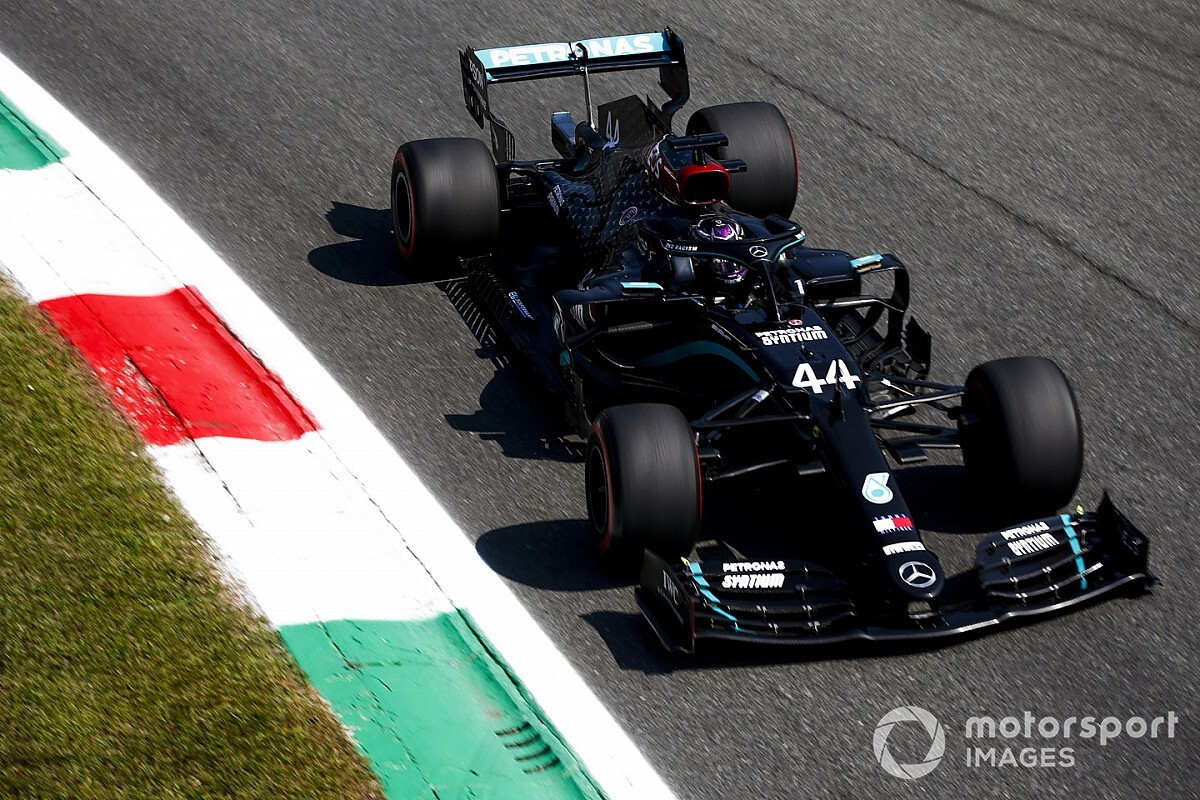 Ricciardo's loss for running too wide at the exit of the Parabolica meant Lando Norris finished third despite missing much of the middle part of the session as McLaren investigated a possible power unit problem, ahead of Pierre Gasly and Max Verstappen.

Under cloudless skies at Monza – where ever more Ferrari banners were being unfurled in the empty main grandstand opposite the team's garage during FP2 – the second 90-minute session got off to a low-key start before Kimi Raikkonen emerged in his Alfa Romeo.

The 2007 world champion, who at one stage in the early running held a wild snap of oversteer as he exited the second, set the initial benchmark at 1m22.959s on the medium rubber, before he was deposed by Alex Albon and then Lance Stroll.

Albon, running the hard tyres at this stage, then retook the top spot with a 1m22.324s, before Gasly improved the fastest time on the mediums.

The AlphaTauri driver then went even quicker to lower the P1 benchmark to a 1m21.578s, as he too then had a moment exiting the second chicane at Turn 5 – dipping his left-hand side wheels through the gravel as he powered away.

After 20 minutes had passed, Verstappen and Hamilton finally appeared, while Bottas spent a further five minutes in the Mercedes garage before he emerged on the hards.

Just before his teammate had come out of the pits, Hamilton took the top spot with a 1m21.085s on the mediums.

Several drivers, including the Ferrari duo, lost slow times for running too wide at the Parabolica, but it was during the mid-session qualifying simulation runs where this proved to be more costly for some of the field.

After a long lull in action just before the halfway stage, the pack headed out and as they made their way slowly around on their out laps on the delicate soft tyres, a big traffic jam occurred on the back straight.

The FIA has warned the teams that the during FP3 and qualifying on Saturday it will use a benchmark time to determine if drivers have toured too slowly ahead of their flying laps – as the governing body seeks to avoid a repeat of such traffic scenarios, which blighted the end of Q3 at the same event in 2019.

In the pack behind, Gasly – who ran off at Turn 1 late on after reporting "something bouncing in the back of the car – a big problem" was one of the last drivers to complete a flying lap on the softs, which left him 0.929s behind Hamilton, but 0.107s ahead of Verstappen, who had slotted into what was then fourth after Ricciardo's best time was deleted.

The Renault driver had completed a 1m20.905s – which would have made him the only driver other than the Mercedes pair to get into the 1m20s – but lost it for running too wide at the exit of the final corner.

This dropped him to P15 in the final order based on his previous best time on the medium tyres, with Albon also pushed back to P14 for the same offence when he had set a 1m21.531s that would have put him 10th.

Norris ran out of sync with the pack after his lengthy stint in the garage, but he slotted into third with a 1m21.089s in the final five minutes of the session after shuffled everyone from Gasly to Albon back one spot.

The McLaren then had his next lap deleted, while Vettel also lost a flying lap for the same Parabolica infraction, but the four-time world champion was able to improve on a subsequent lap during the long run data-gathering period that ended the session, as is traditional.

Carlos Sainz took sixth in the final standings ahead of Daniil Kvyat, Stroll and Charles Leclerc, who took ninth with his teammate Sebastian Vettel 12th after finishing 19th in FP1.

But both Ferrari drivers had off-track moments in the closing stages, with Vettel spinning in front of Ricciardo as he exited the first Lesmo and nearly backing into the barriers at low speed, while Leclerc had a similar moment as the back end of his SF1000 also snapped left as he ran through the same corner a few minutes later.

Leclerc was able to keep his car going forwards, but ran off into the gravel and reported "the car is so hard to drive" over his radio.

Sergio Perez rounded out the top 10 ahead of Esteban Ocon.