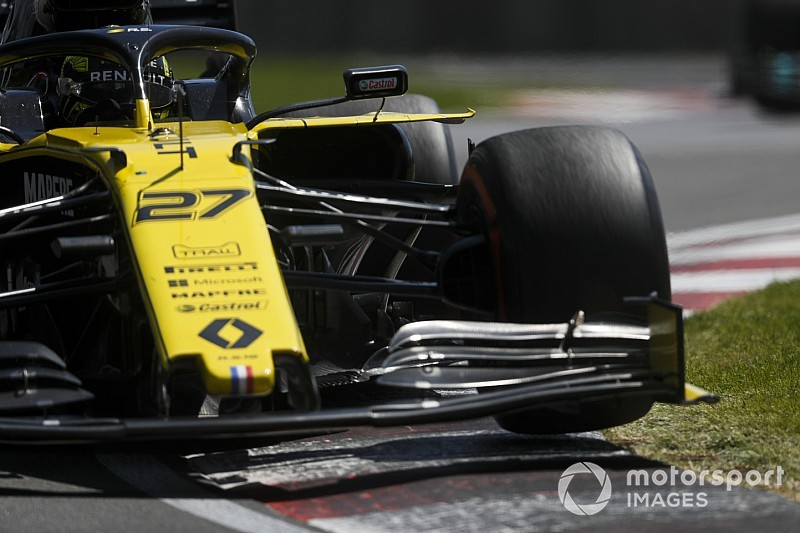 Nico Hulkenberg believes Renault's 2019 Formula 1 car works "pretty much everywhere" but that progress has been hidden by the team's "troubled" start to the season.

Renault finished fourth in the constructors' championship last year and targeted moving clear of the midfield battle in 2019, but after a mix of poor reliability and reduced performance it was left eighth in the points prior to the Canadian Grand Prix.

However, sixth and seventh place finishes in Montreal last weekend for Daniel Ricciardo and Hulkenberg launched Renault to fifth in the standings as the works team matched its best points haul since returning to the grid in 2016.

Renault has promised a significant chassis update for next weekend's French Grand Prix, having run its engine harder in recent races as well.

"I think it's realistic, because so far the car has performed really on every kind of circuit," he said. "So I think the package is consistent and works pretty much everywhere so far we've been.

"We've just not got the results because of different mistakes, reasons, technical issues, whatever it was. So, I'm quite optimistic."

Renault was the most consistent team behind the big three in 2018, failing to score points in only four grands prix.

It has already missed out on a top-10 finish on three occasions this year, but Hulkenberg believes that was a legacy of problems the team is now on top of.

"It was nice to finally have a good weekend throughout, without any issues or hiccups, and get both cars through in points scoring positions," Hulkenberg said of the Canadian GP.

"It is a nice reward for everyone at Viry and Enstone. Hard work pays off. It's just so far we've all been compromised.

"I feel the car always had this potential, but just human error, technical error, often we started really far at the back – and on circuits where you can't overtake, so it was difficult to recover.

"It is rewarding and satisfying to finally put the car where it belongs and take these points."

Hulkenberg said he is "very excited" for the upgrades Renault has planned for its home race, where he has an eye on repeating the feat of beating a Red Bull – Pierre Gasly – on merit.

"We have to keep this sort of thing going, hopefully take this momentum into the Renault home grand prix in two weeks," said Hulkenberg.

"The top three teams are pretty well ahead, though one Red Bull we definitely beat on pace and merit. That was good to see. We get some upgrades at Paul Ricard, I'm very excited for those.

"Hopefully they can bring more performance to the car and hopefully we can, maybe, close the gap."

McLaren: 2020 car will be first to prove new structure