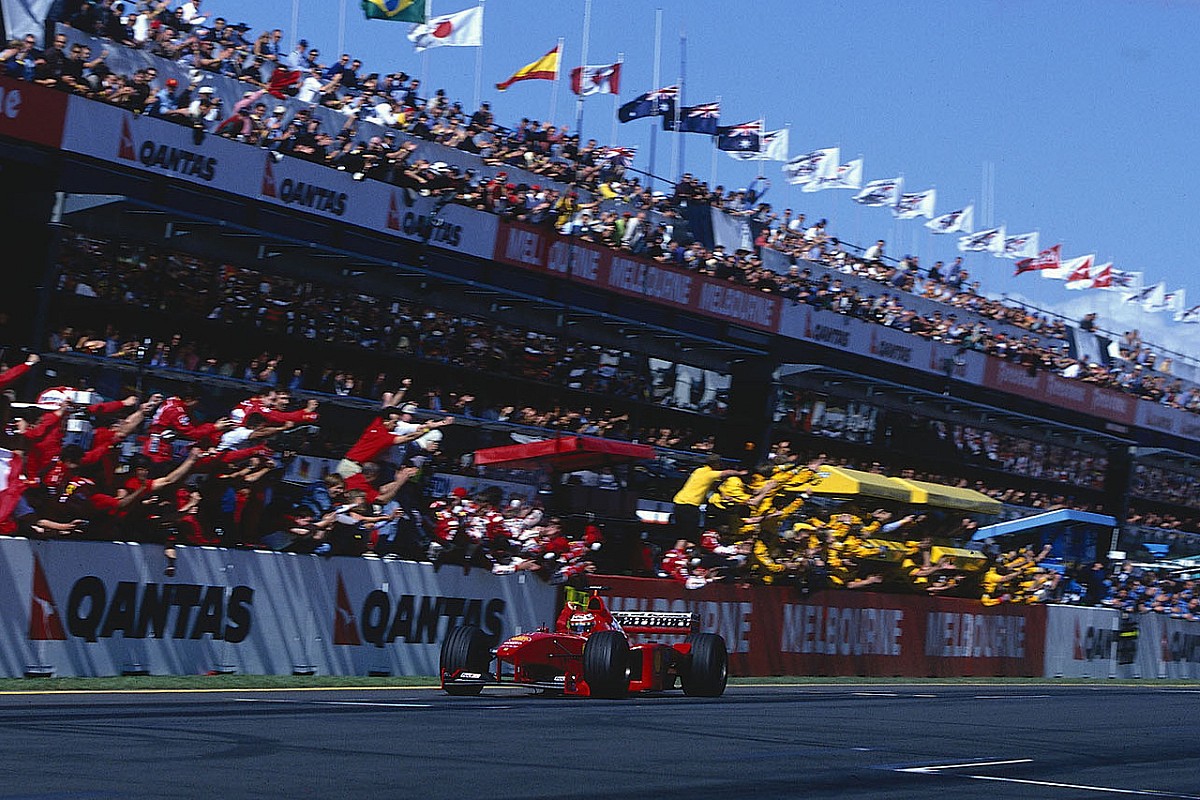 The 1999 Formula 1 season finished with Ferrari fielding a previously unlikely championship contender. But the first race of that campaign showed that Eddie Irvine could succeed out of Michael Schumacher's shadow

When Ferrari, albeit reluctantly, put its weight behind Eddie Irvine in Formula 1's 1999 title hunt, it did so against all convention. Sure, it was a necessity after Michael Schumacher's leg-breaking shunt at the British Grand Prix, but for the first time in his F1 career Irvine was already in the hunt on merit.

Before the 1999 season had begun, Irvine had not won an F1 race. He was firmly Schumacher's expendable tail-gunner, managing a smattering of podiums as the German scooped all the plaudits. But it was arguably a job that belied Irvine's rebellious nature and uncompromising racing style. Why would he accept a supporting role so willingly?

Irvine firmly believed that he could one day usurp Schumacher as the apple of Ferrari's eye; all he needed was the chance to do so. Against the odds, the 1999 season opener offered that opportunity – the start of the first full F1 season I watched.

My dad woke me up before the crack of dawn to quietly saunter down to the living room, tip-toeing down the stairs to avoid the slightest creak, and parking up on the sofa – bleary-eyed – ready for whatever the race could throw at us. In anticipation of the famous '90s pre-race ident, Dad turned the volume down lest the wah-heavy riff rouse anyone else in the house.

From the outset, it looked like little had changed from the previous year. Reigning champion Mika Hakkinen had eclipsed teammate David Coulthard by half a second for pole, as Schumacher led Ferrari's charge from the second row, parked next to Stewart's Rubens Barrichello. After two years planted in the midfield, Jackie Stewart's team had made quite a leap in the off-season with its new SF-3. As had Jordan, with Williams refugee Heinz-Harald Frentzen beating Irvine to fifth on the grid.

But McLaren had endured a pre-race panic when Hakkinen had returned to the garage from his lap to the starting grid, initially electing to start in the spare car before changing his mind once more. Then, immediately after the formation lap, drama engulfed the grid once more as both Stewarts simultaneously and spontaneously combusted. 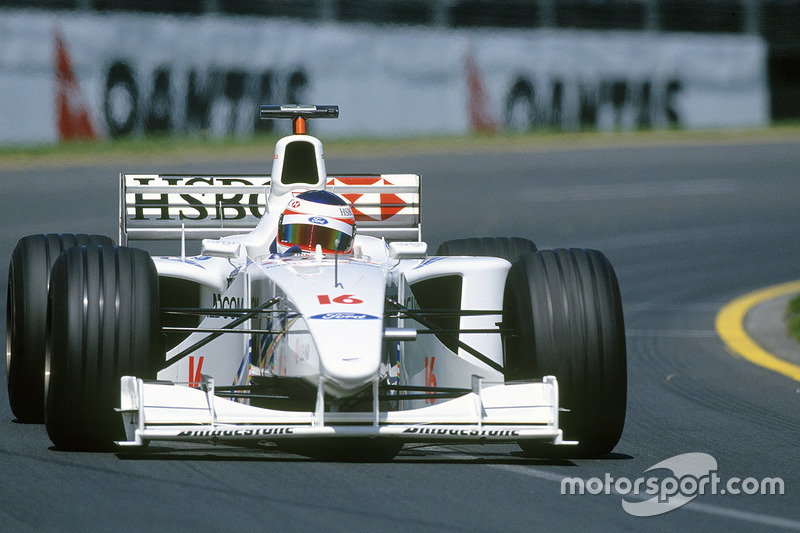 The start aborted, confusion ensued as Stewart had to work out whether it could send Barrichello out to race in the spare car given the completion of the formation lap. Granted clearance to take to the restart, the Brazilian had to make a pitlane start – as the second at a formation lap was equally fraught.

Hakkinen and Michael Schumacher were unable to get away from the grid and, although Hakkinen managed to dip the clutch and find a way to get rolling before the final car had passed, Schumacher took longer to get moving. Like the recent 1998 season finale in Japan, Schumacher was resigned to start from the back of the grid.

When the race finally got underway, Hakkinen and Coulthard both preserved their positions, while Irvine made use of the empty row ahead of him to leapfrog Frentzen into Turn 1. But the McLarens were peerless, threatening to replicate the two-horse race at Albert Park from a season before as they marched away from Irvine; who was 2.4s in arrears by the end of lap one – despite being on a softer grade of tyre - and coming under fire from Frentzen, looking to get his Jordan tenure off to a good start.

As the early stages of the race unfolded, the McLarens extended their advantage over the rest of the field, with Coulthard harrying Hakkinen.

Hakkinen picked up the pace and brought Coulthard with him, and by the end of the fourth lap had already cleared Irvine by almost 10 seconds. After the initial flurry of excitement, the Australian GP looked to be cut-and-dried, and it was surely only a matter of which McLaren would win.

The battle was on for third place, however, and Irvine was not quite able to slip out of Frentzen's clutches. Behind them, Ralf Schumacher – in his first race for Williams – was lingering in fifth and keeping them honest, but none looked like overturning the advantage that the McLaren MP4/14s had around Melbourne.

Hopes were firmly pinned on McLaren's iffy reliability in testing, leading then-ITV commentator Martin Brundle to quip that "They'd barely get you down to the chip shop on Sundays".

Mere laps later, the commentator's curse seemed to wield its remorseless scythe as Coulthard was afflicted by a bout of hydraulics issues. Hakkinen crossed the line to begin lap 14, with Coulthard retreating to his garage to leave his teammate unchallenged. To save the race from becoming a Hakkinen walkover, it needed another stimulus to equalise the field. 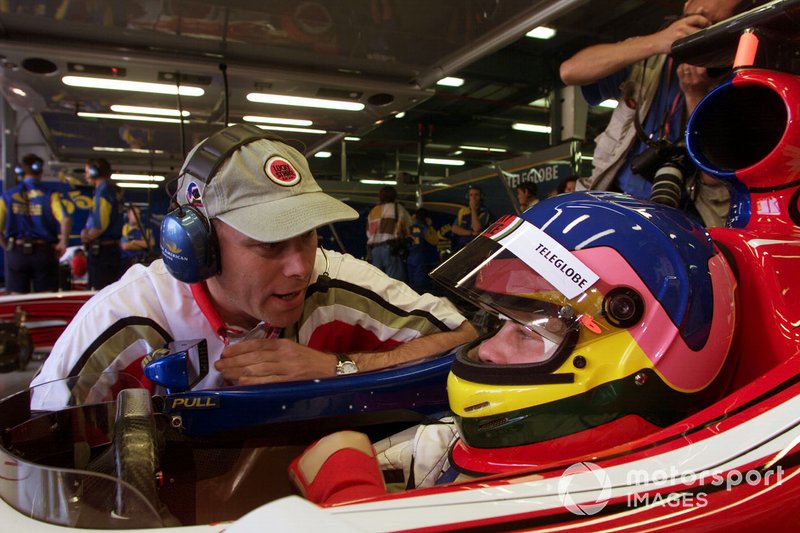 This came courtesy of Jacques Villeneuve, racing for the new British American Racing squad, who suddenly lost his rear wing while circulating in an impressive eighth place. Having careened into the wall on Lakeside Drive, the dual-liveried BAR 01 was cleared from the track under safety-car conditions, reeling Hakkinen back towards Irvine.

As the safety car peeled into the pits after a three-lap spell, Hakkinen began to back the pack up – as is customary. But, curiously, the Finn kept doing so up to the line and, smelling blood, Irvine stole past the reigning champion. Hakkinen was in the throes of another McLaren mechanical problem.

Behind them, and in a brilliant display of quick thinking, Ralf Schumacher left a gap to Frentzen and then gunned the throttle, out-dragging the Jordan driver into Turn 1 to briefly occupy second.

But the lead was Irvine's, and although Frentzen repassed Ralf Schumacher into Turn 3, the Northern Irishman was able to give himself some breathing space as further skirmishes erupted down the order; Giancarlo Fisichella careened into the back of Jarno Trulli and the recovering Barrichello took evasive action, letting Michael Schumacher and debutant Pedro de la Rosa trickle through to occupy a very unlikely top six. Shaking off the contact, Trulli then put a move on Ralf Schumacher at Turn 9 shortly after to shuffle up into third, leaving the Williams driver under pressures from his brother.

Hakkinen managed to crawl around to the pits, and although McLaren serviced his car and tentatively sent him back on track, the problem was terminal. In a matter of laps, a race that looked like a sure-fire repeat of its predecessor now had a very different outlook.

With Trulli between himself and the Schumachers, Frentzen saw an opportunity to hit back at Irvine and underline Jordan's potential going into 1999, grasping Irvine's coat-tails prior to another safety car. This time, F1 returnee Alessandro Zanardi – fresh off the back of winning the CART title – went off-road at Turn 5, spun and clouted the wall, bringing Frentzen further into play.

More crucially, Michael Schumacher was firmly in play too and, after Trulli pitted, was three passes away from the lead of the race. Barrichello also used the opportunity to pit, relieving the pressure on the senior Schumacher even more, but the then-two-time champion could make no inroads into his brother's advantage as Irvine led away at the restart.

Moments later, Michael's right-rear tyre gave way and the Ferrari driver had to corral his car into the pitlane, also nursing a broken front wing – throwing him firmly out of contention. Ferrari's hopes, at this point, were fully on Irvine. 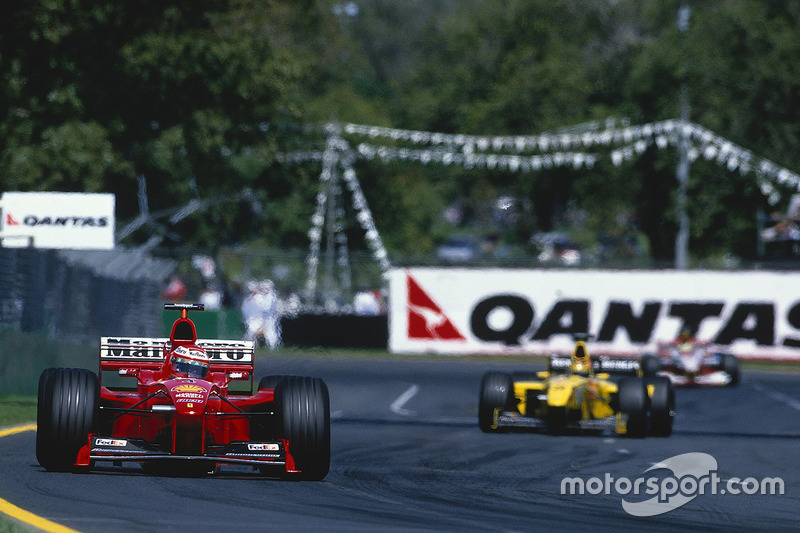 In a further deluge of incidents, Trulli's nightmarish relationship with Turn 3 continued as he punted Minardi's Marc Gene out of the way and sent the duo into retirement. Diniz and Wurz also both retired while in the points, elevating Arrows' Tora Takagi briefly into an unexpected fourth before the Japanese driver pitted to help Fisichella up another position.

The frequency of positional changes meant the race resembled the Mad Hatter's tea party, and there were more to come as the race hit its nominal pitstop phase for those who hadn't already taken fuel and tyres.

Ralf Schumacher's stop had elevated Fisichella into third the lap before Irvine and Frentzen came in together at the end of lap 34. Ferrari and Jordan's pitcrews performed near-identical stops, but Frentzen cycled out behind Fisichella prior to the Italian's own stop, leaving Irvine to retain the lead. Once the Benetton driver ceded second and allowed Frentzen and Schumacher to return to the podium berths, the top three was essentially settled.

Irvine wisely dictated the pace and, while Frentzen spent the entirety of the race just over a second behind the Ferrari driver, the lead was unassailable. Irvine crossed the line to secure his maiden F1 victory – just 1.027s clear of the relentless Frentzen.

Ralf Schumacher claimed a podium for Williams first time out, reassuming third after Fisichella pitted once more. Remarkably, despite his formation-lap fire and a stop-go penalty for passing Michael Schumacher under yellow flags, Barrichello rescued a fifth-place finish to underline an otherwise-impressive weekend for Stewart.

The battle for the final point was fought with as much vigour as the rest of the race, and after further retirements it was contested by the two Arrows. De la Rosa narrowly beat Takagi to score on his F1 debut, while Michael Schumacher was the final finisher - a lap down - after his puncture.

At last, Irvine had earned a chance to prove he was more than Schumacher's subordinate – and having drawn level on points with him at the time of Schumacher's accident at Silverstone, the 1999 title fight was poised to feature an Irvine intervention.

Hakkinen arguably stumbled to the line first in what was a chaotic season amid a backdrop of surly weather conditions and myriad driver errors – as Irvine came within two points of pulling off a remarkable title win. That peerless drive in Melbourne was undoubtedly the framework for his breakout F1 year. 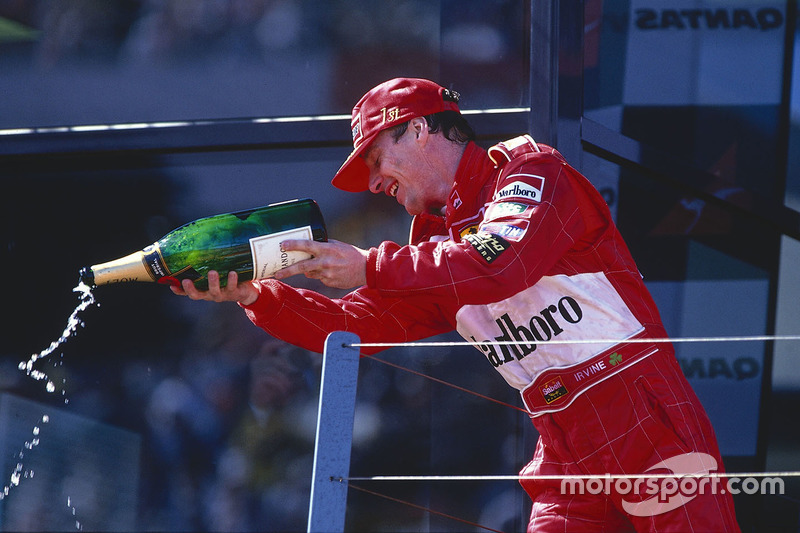