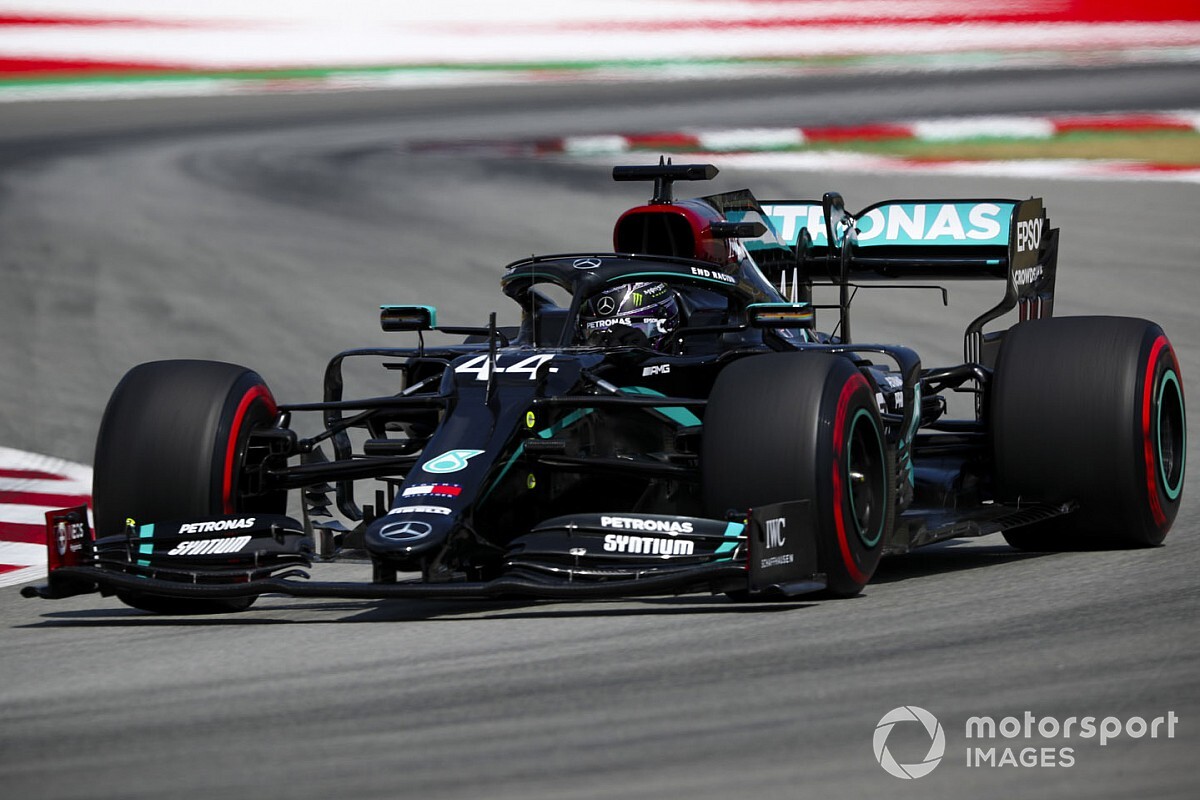 The Mercedes drivers locked out the front row for the fourth time in the 2020 season, with Max Verstappen continuing what he called his "subscription" to third place, in qualifying at Barcelona on Saturday.

But all three – along with Racing Point's Lance Stroll – did not go quicker on their final laps on the soft tyre in Q3 compared to the other six runners, despite Hamilton calling his 1m15.584s lap that ended up as the pole-winning time "solid" with places he "felt like I could improve".

When asked by Motorsport.com to explain why he did not go faster on his final lap, Hamilton said: "Not really sure.

"This track, there is track ramp and then the track temperature can vary and the wind can vary. But yeah, the first lap felt OK, but a little bit, in some areas, within the limit.

"So I knew that there was some areas that I could improve on. And then when I just went from the next run the tyres just didn't feel the same and the grip wasn't the same for me.

"So it was just overall a really poor second lap. But I kept going, but it was nowhere near as good as the first one."

Bottas set the fastest time in the second sector on his final run, but he ended up behind his first time in Q3 after a slower end to the lap.

"I don't think conditions really changed – at least it felt like they didn't really improve for the second run," he said of his last effort.

"I thought I was going to improve because when I crossed the line I was one tenth up from my previous time, but then obviously it went to zero, so maybe I just had a bit more distance – that's how the time delta works.

"I don't know – I thought it was a bit better the second run, but it just wasn't. I don't think the track really changed."

Hamilton also explained that he "made some really good changes and progressed forwards" during the overnight analysis following Friday practice, which led to him topping FP3 and then taking his 92nd F1 pole and 150th front row start.

"Each first lap [in every qualifying segment] was strong, which I was really happy with," he said.

"The one in Q3 was solid. I felt like I could improve, but I wasn't able to do it on the second lap [and] fortunately neither could the strong dude next to me!

"He's keeping me honest, it's obviously very close between us, so every millisecond counts."

But Hamilton feels "tomorrow is going to be tough when we get to the race" because of the pace 70th Anniversary GP winner Verstappen showed in the long runs in FP2, where the Red Bull driver appeared to be faster than the Mercedes cars.

"The scenario is different," Hamilton of the race.

"Over a single lap we seem to have the edge over the Red Bulls but this weekend I think we're pretty much on par when it comes to race pace.

"And so it's going to be a tough battle with Max tomorrow."

One of the keys to Verstappen's victory last time out at Silverstone was starting on a tyre one step harder compared to the Mercedes cars – a strategy Red Bull also tried in qualifying for the season-opening Austrian Grand Prix and in Hungary.

But all 10 Q3 runners will start on the same soft tyres for the Spanish GP.

"Basically [it's] because I think the soft tyre is good enough to start the race on," Verstappen explained when asked why he had not repeated the alternative Q2 tactic this time around by Motorsport.com

"Normally the softest compound is a bit more tricky, as it falls apart quite quickly, but I think it's alright at the track here."