Haas to split specs on Friday to avoid further "confusion" 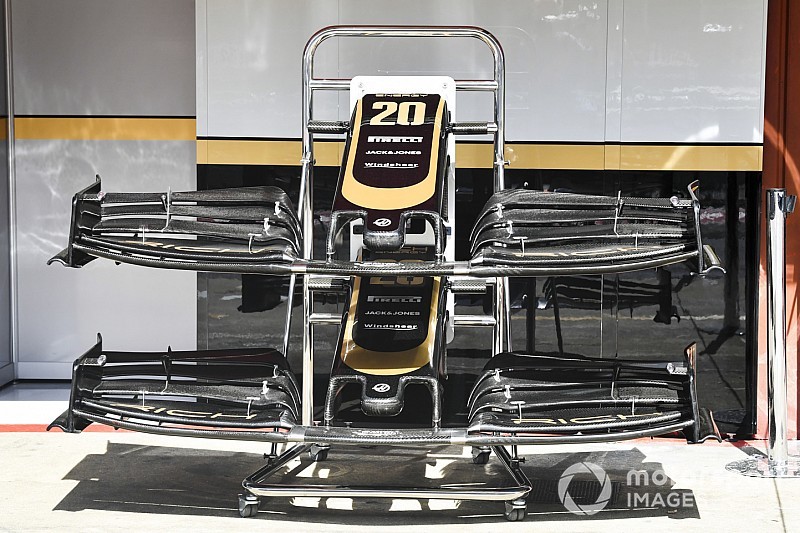 Haas says that its lack of an answer on how to solve its Formula 1 tyre struggles means it will only run its new car updates on Romain Grosjean's car in practice for the Spanish Grand Prix.

The Banbury-based team has had difficulties at the start of this season getting its tyres into the right operating window, which has especially hurt it in races.

But although it understands what the problem is, team principal Gunther Steiner said the outfit does not yet have a solution in place to overcome the issue.

Haas is bringing a major update package to Barcelona, and Steiner has said that a decision has been made to keep Kevin Magnussen in the older configuration on Friday to ensure that the outfit does not get confused over the impact the new package has on its tyre woes.

Steiner said: "What we are doing tomorrow, we will run one car on the 'old' spec and one on the new spec, so we have something to compare.

"If with the new spec we've got issues at least we can compare it. If you put two cars on the new spec and you've got an issue, [you then ask yourself] is it the tyres or the new spec? So we've got one and one and then we can convert the second car on Friday night if everything goes to plan.

"We've got all the parts. We consciously wanted to have a back-to-back and not to confuse us more with the tyre issue."

Steiner has admitted that while the team is making progress in better understanding what issues it is facing with tyres, he is clear that there is not yet a solution in place.

"I think we know what we need, but we don't know how to get it," he said. "It is as simple as saying that one.

"We just need to get in the window by running the tyres warmer. It sounds almost too simplistic, so you could be asking why are you not doing that? [The answer is] because we don't know how to get the temperature in the tyre. We are not the only ones, but maybe we are affected more than other people, I fully admit that."

With the Barcelona circuit featuring more high energy corners than Baku, Steiner is at least hopeful that his team's form will not be as bad as it was in Baku.

"It cannot be worse," he explained. "I think Baku was the worst, and here, it is always after you have had three races like we have had, you always lose some confidence. It is not like I would say – we will be fine here.

"Here, we should be okay. We were okay in testing, we were okay in Australia and now if we are going backwards, it will be like what happened?"

McLaren needs to be self-critical to succeed - Seidl