Romain Grosjean has recounted the full story of the escape from his burning Formula 1 car – and revealed there were moments where he feared he was going to die.

The Frenchman crashed out of the Bahrain Grand Prix on the opening lap last weekend, with his car plunging through the barriers and splitting in to two before bursting into flames.

Grosjean said that he initially did not realise that the car was on fire when he first tried to get out, but then faced difficulties finding a way out of the cockpit as he was briefly trapped.

“For me it wasn't quite 28 seconds, it felt more like 1m30s if I'd put a time on it,” said the Haas driver, speaking to media on Friday afternoon in Bahrain.

“When the car came to a stop, I opened my eyes, and undid my seatbelt straight away. The thing I didn't remember the next days what what did I do with the steering wheel because I don't have the memory of taking the steering wheel off and putting it out?

“The team said no, the steering had gone in between your legs, the column and everything broke and went down. I didn't have to bother with the steering wheel then, so I tried to jump out. But I felt like something was touching my head, so I sit back down in the car and my first thought was, I'm going to wait. I'm upside down against the wall, so I'm going to wait that come someone comes and helps me.”

Grosjean said at this moment he thought the biggest danger had passed, but it was then that he realised there was a fire.

“I wasn't in distress and obviously I didn’t know there was this fire. Then I look right and left and watching on the left, I see fire. So I say, okay, I don't really have the time to wait here. 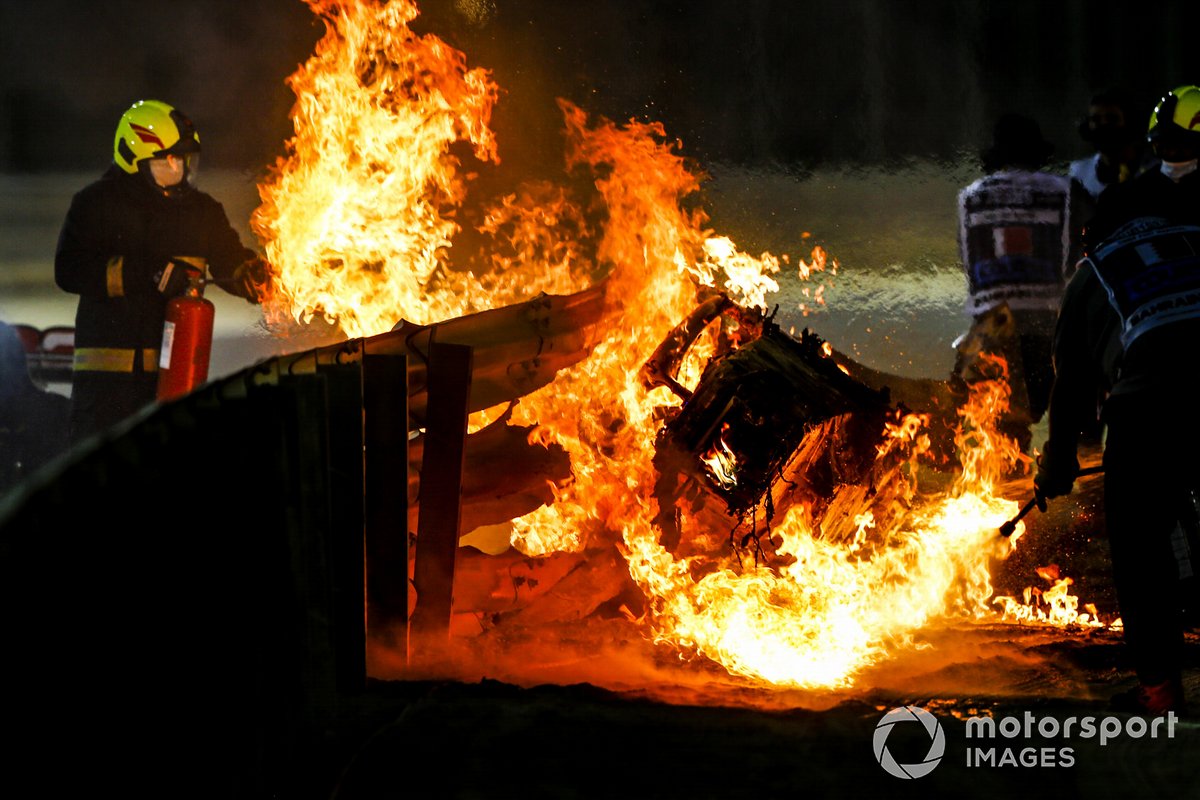 A fire marshal extinguishes the flames after a huge crash for Romain Grosjean, Haas VF-20, on the opening lap

Grosjean then says this moment was the most difficult for him as he briefly felt his body relaxing and started wondering if he was not going to get out and how much pain he was going to go through.

“I go back down and then there's the less pleasant moment where my body started to relax. I'm at peace with myself and [I think] I'm going to die. I asked my question: is it going to burn my shoe, or my foot or my hand? Is it going to be painful? Where is it going to start?

“To me that looks like two, three or four seconds. I guess it will be milliseconds at a time. And then, I think about my kids, and they cannot lose their dad today. So I don't know why I did it, but I decided to turn my helmet on the left hand side and to go up and then try to twist my shoulder. That sort of worked.

“But then I realised my foot is stuck in the car. So I sit back down. I pull as hard as I can on my left leg. The shoe stayed where my foot was, but my foot came out of the shoe.

“And then I do it again and then the shoulder is going through [the gap] and, at the time the shoulder was through, I know I'm going to jump out. I've got both hands on the fire that time.

“My gloves are red normally, and I see, especially the left one, changing colour, starting melting and going full black. I feel the pain that my hands are in the fire, but also I feel the relief that I am out of the car.

“Then I jump out, I go on the barrier and then I feel Ian [Roberts, F1 doctor] pulling on my overalls. So, I know I'm not on my own anymore and there is someone with me.”

Once out of the car and being led away, Grosjean said he feared he was a human fireball, but says he instantly had the presence of mind to remove his gloves in case they continued burning his hands.

“When I land and then they touch on my back, I'm like, 'Oh shit, I'm like a running fireball. I had that image that we've seen a video from the FIA when they did a test, they put someone on fire and he runs around just to show the overalls were strong. I've got an image that I've got fire following me.

“Then we go into the medical car. Sit down. They put some cold compress on my hand. I told them my hands are burned, my foot is broken. But then the pain really starts going very high, especially on the left foot. The hands were okay at a time, the left foot starts being very painful.” 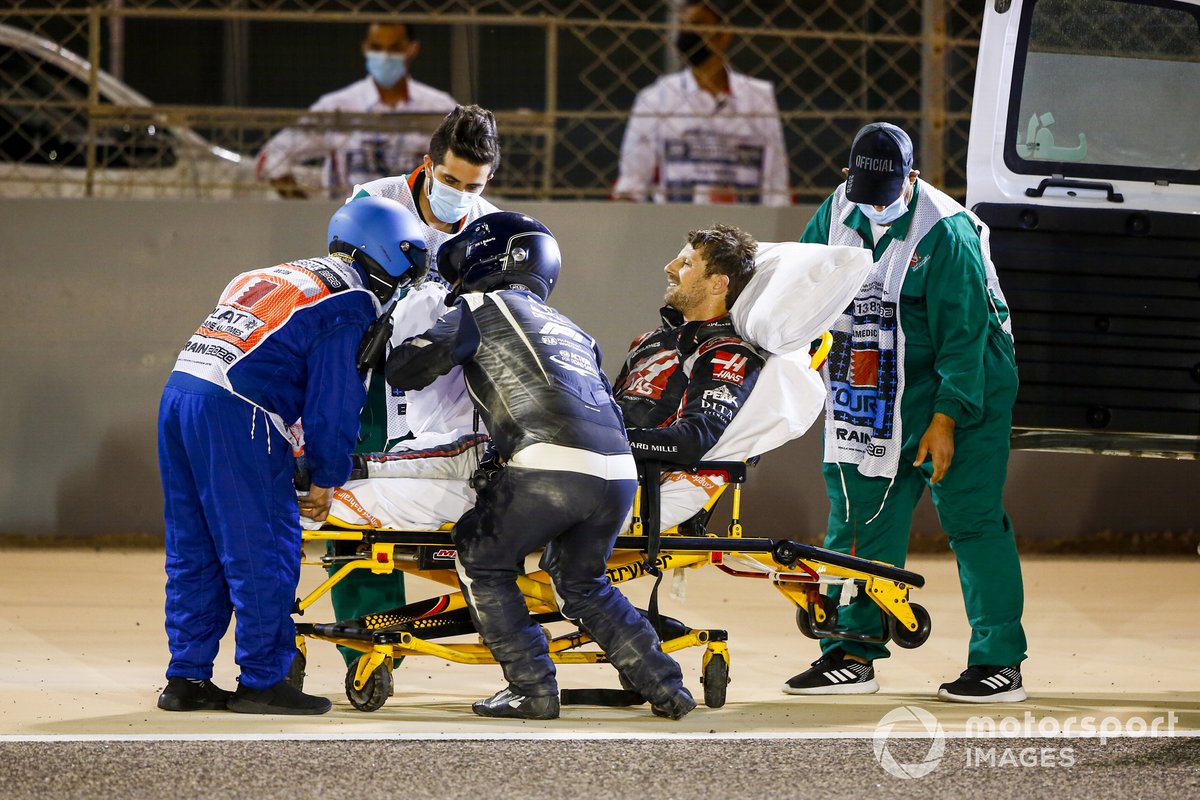 Romain Grosjean, Haas F1, is taken away on a stretcher after his opening lap crash

With the ambulance on his way, Grosjean was then told that he would be stretchered away, but he defiantly told Roberts that he wanted to walk from the medical car so he could show the world he was not seriously injured.

“I guess on the medical side it wasn't the perfect decision but they understood that for me it was key at the point that there was some footage of me walking towards the ambulance, even though I'd walked out of the fire.

“I needed to send another strong message that I was okay and I was going to walk towards the ambulance.

“After that every time I met anyone, I would say two burned hands, one broken foot. That's all I could say to everyone that I was meeting. I was scared obviously of my condition and I wanted everyone that was coming in and treating me to know what the symptoms were.

“But that is the full story of the 28 seconds. As you can imagine, it looked longer than 28 seconds with all the thoughts I had, so they must have been milliseconds.”