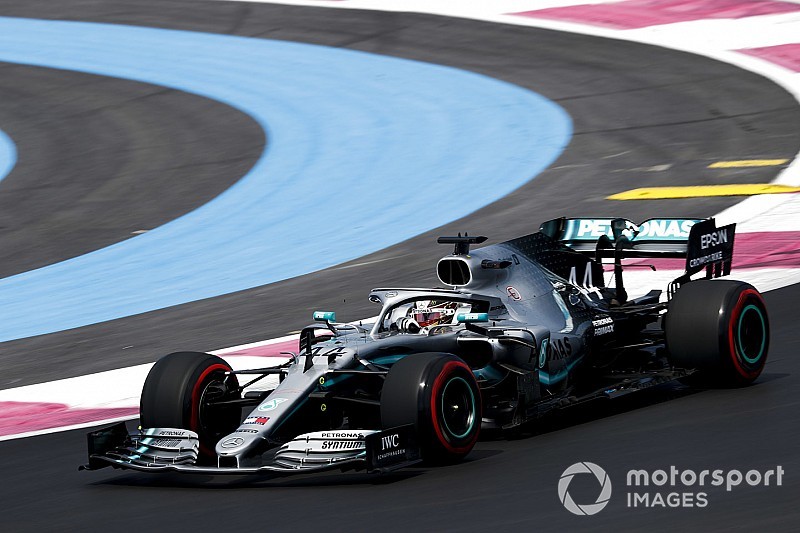 The Mercedes duo led the lead Ferrari of Charles Leclerc by almost four tenths of a second at Paul Ricard.

Mercedes took control of a largely uneventful session heading towards the final half-hour, while Ferrari's influence was limited after a bout of early running and then a late rise up the order.

Bottas put Mercedes on top for the first time after half an hour of running but was displaced by second round of runs approaching the one-hour mark.

Pierre Gasly's Red Bull and the McLaren of Lando Norris had very brief spells in P1 as they switched to fresh soft tyres.

However, Bottas then moved to the top on his own new set of softs, before Hamilton surged ahead on a 1m33.272s.

That got whittled down to a 1m32.738s, which Bottas was just unable to match and had to settle for a time 0.069s slower.

Verstappen was 0.8s off the pace in fourth as his team had a scruffy session, with the Dutchman and teammate Gasly both suffering spins.

Sebastian Vettel languished down the order for most of FP1 as Ferrari opted for a lot of running early on as it evaluated new aero parts.

That meant Vettel was among the last of those to go out for a second run, initially improving to 12th and then to fifth, albeit a full second off the pace.

Gasly managed to haul himself into sixth and avoid being beaten by a member of the non-big three teams, but by less than 0.02s.

Norris finished best-of-the-rest for McLaren, just behind Gasly – who was lucky not to plough his Red Bull into the wall after a lurid off at Turn 4.

Gasly lost the rear of his car through the Turn 3 right-hander and slid sideways off track to the right of Turn 4, coming to a rest just before the barriers.

Carlos Sainz completed a seventh-eighth result for McLaren in FP1 and Daniel Ricciardo's Renault was ninth, 0.28s off having lost time when he clipped a kerb and the team had to check for damage.

A water leak consigned Romain Grosjean to the Haas garage for most of the session.

The Frenchman managed just nine laps and was 4.8s off the pace, behind the two Williams drivers as FP1 stand-in Nicholas Latifi outpaced Robert Kubica but 0.025s.