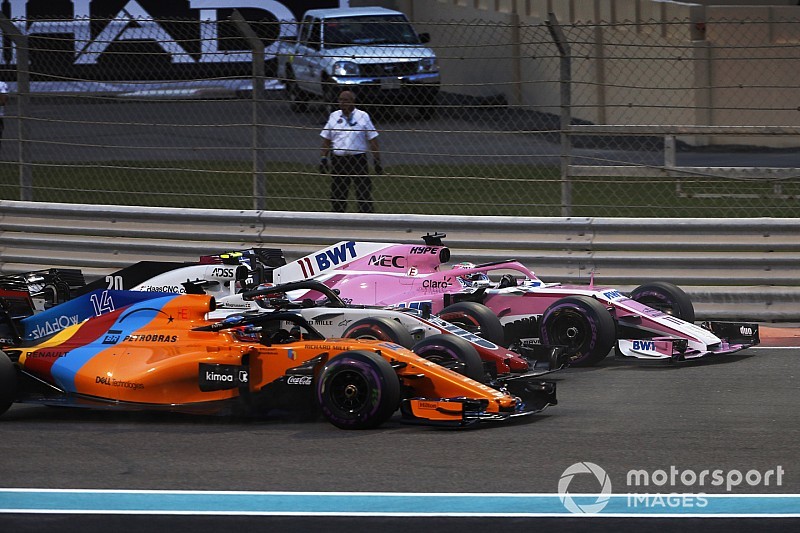 Force India boss Otmar Szafnauer says that mistakes in the last few races of the Formula 1 season allowed rival McLaren to beat it in the standings.

Sergio Perez finished eighth in the Abu Dhabi Grand Prix, while an oil leak – believed to be from a pipe unrelated to Mercedes – led to an eventual retirement for Esteban Ocon.

The Silverstone-based team had to forfeit all its constructors' championship points after it changed ownership, starting again from zero at the Belgian Grand Prix.

Despite that, Force India finished 10 points shy of McLaren, and just four ahead of Sauber, after strong scoring by Charles Leclerc in recent races boosted the Swiss team's total.

"I think sixth was possible, but we just made some mistakes in the last few races," Szafnauer told Motorsport.com.

"Singapore was a big one, and we had a brake failure in Mexico. So that cost us sixth.

"There were points in the race today when we were mathematically ahead of McLaren, as before we pitted we were running fifth and sixth, but you've got to wait until the end.

"We're happy-ish. I think from where we were in Spa, sixth was achievable, but seventh is not bad. In Spa we were last, so to come back to seventh was pretty good."

Szafnauer also paid tribute to Ocon, who put in another feisty drive on his last outing with the team.

"He had a great race. He had some great battles with [Max] Verstappen again, clean ones, and I think at one point he avoided Verstappen running into him.

"Had he stayed on his natural line, Verstappen would have hit him. We'll miss him, but he won't be gone forever."