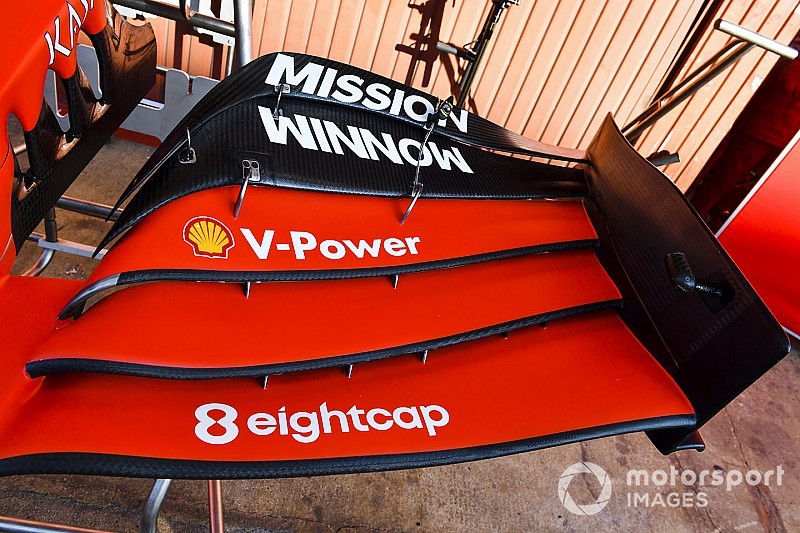 Ferrari says it plans to stick with its current front wing concept, despite rivals Mercedes dominating Formula 1 with an alternative design.

There was much intrigue at the start of the year about the different choices that Ferrari and Mercedes had made, with the two outfits opting for radically different front wings.

Mercedes had elected for a higher downforce solution, while Ferrari preferred a design that helped better manage outwash for improved aero efficiency.

Following its defeat at the Spanish Grand Prix, Ferrari had admitted that it had to consider the fact it may have got its concept wrong judging by how far behind Mercedes it had fallen.

But ahead of the Monaco Grand Prix, team principal Mattia Binotto said recent investigations had left the team assured that its front wing choice was not a factor in its struggles.

"I think we do not need to change our front wing," he said when asked by Motorsport.com if the team felt it needed a different front wing solution.

"Simply it is a different concept to Mercedes, but it doesn't mean that we have achieved the maximum of its concept today. We are not foreseeing to change the wing concept.

"The Mercedes style was checked at the start of our project so it is a comparison that we did at the start which was for one way of development. Certainly through the season you always try to double check back what you did to see if it was the right choice, but we do not foresee a change right now."

Binotto said that Ferrari's main consideration at the moment was evaluating the pursuit of higher downforce developments for its car – with it believing its current low-drag focus is not helping it get the most out of Formula 1's 2019 tyres.

"The tyres of this season are quite different from the ones of last season," explained Binotto. "The main difference is that last year we had very good warm up with the tyres and we were all focused and concentrating on cooling the tyres as much as we could, to keep them working because the lower was the temperature the better was the grip.

"The tyres of this season are quite different in this respect. Warm up is a lot more difficult and let me say what we may call the window, the temperature target of when you have the best grip from the tyres itself, in order to achieve it you need to heat up the tyres.

"How can you achieve that? You can achieve that through braking temperatures, it is rims cooling, but also it is downforce no doubt. Not only the downforce has an absolute value, but it is how you may balance the downforce high speed to low speed. It may be as well how you may even target your aero development efficiency versus maximum downforce itself.

"I think we have a car that is somehow quite efficient, as you can see on the straights, but it doesn't mean we have the car that has the highest downforce in the pit lane.

"It is right to question ourselves if we should look for different overall targets of how to achieve the final performance."

As well as making changes to the aero development path, Binotto has suggested that alterations may need to be made to its front suspension to help its performance too.

"What we are lacking is grip from the tyres because we are not able to make them work properly," he said. "And that is interaction is between aero and mechanical, and overall it is a balance.

He added: "We need to develop the car. We need to improve, so there may be changes on the front suspension yes, as we may change aero, as you may change cooling. But I don't think that in the suspension itself there is something of principle that is wrong."