Ferrari has "significant" answer on cause of update struggles 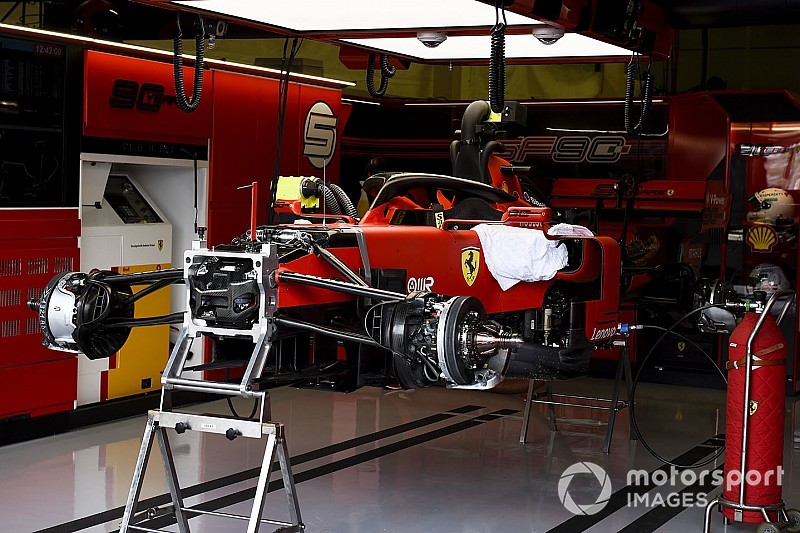 Ferrari thinks the key to improving its Formula 1 car lies in making its wind tunnel work more representative of real-life conditions, following recent struggles with getting upgrades to work.

Team principal Mattia Binotto has targeted improvements in such “boundary conditions” within the SF90's development after Ferrari faced a discrepancy between what it expected a recent Formula 1 upgrade to bring and what it discovered in reality.

The Italian team ditched the new floor it trialled in practice for the French Grand Prix, and ran further tests in Austria to establish why it had not performed as expected.

Ferrari driver Sebastian Vettel said ahead of this weekend’s British Grand Prix that the team now had “clarity” over its development question marks.

“We have important and significant answers from the test. So now at least we understood why it didn't work, from now on we need obviously to progress and improve.

“There is nothing here, we're still with the [old] floor we had in Ricard and in Austria.”

Binotto has previously denied suggestions that Ferrari has suffered a correlation problem between the windtunnel and the track.

He reiterated at Silverstone that it is “wrong to say miscorrelation”, even though the consequence Ferrari has experienced is the same as that issue.

Asked by Motorsport.com to explain what has been discovered, if not a correlation problem, Binotto said: “I think I can only tell you that in specific conditions, certainly we didn't have at the track what we were expecting from the windtunnel.

“So, it's boundary conditions that we have to address, to make sure that to be more representative in all conditions.”

This suggests that the values Ferrari had at some points during its development process were inaccurate, rather than the part performing erratically in reality – although if so, it is not clear if this is because of Ferrari’s own inputs or the tools it uses to perform its analysis.

Binotto smiled at a question from Motorsport.com asking whether it was Ferrari’s tools or how it is using them, and only said “this one is too much detail”.

However, his previous reference to “boundary conditions” suggests the problem could be related to the reliability of its CFD development, which relies on real-world physical inputs to produce accurate analysis.

In France, Ferrari did successfully introduce revised front wing endplates and flow conditioners in Austria, and has made a minor aerodynamic change for this weekend’s race too, slightly altering the engine cover design.

Binotto said Ferrari, which is targeting greater peak downforce with further upgrades, will pursue “continuous development” rather than wait and introduce a big package.

“After Barcelona, probably was our weakest performance overall so far, we introduced several changes and modifications to the car,” he said.

“It's not that we left our car to Spain and there will be an upgrade later on. The car has already improved and has been developing.”