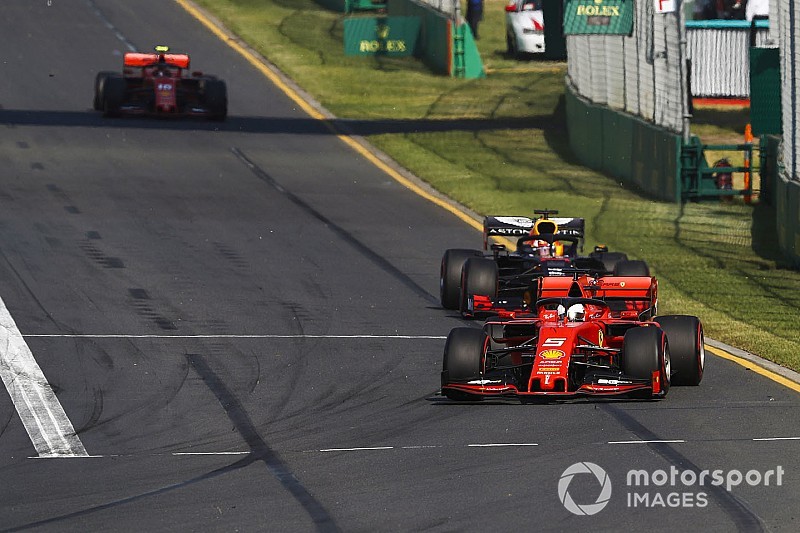 Ferrari believes the potential of its 2019 Formula 1 car is “certainly bigger” than it showed in the Australian Grand Prix, which must be made into an “exception” this season.

Sebastian Vettel topped pre-season testing at Barcelona and Ferrari was considered to have an advantage heading to the season-opening race, but failed to even score a podium as Mercedes dominated and Red Bull snuck ahead.

Both Ferrari drivers complained that the balance they enjoyed in testing was not the same in Melbourne, which led Mercedes boss Toto Wolff to suggest his team’s rival had simply not got its set-up right.

Asked if it was a fair comment from Wolff, and if the different nature of the Albert Park circuit played a part, Ferrari team principal Mattia Binotto said: “Conditions [in Melbourne] are certainly different to Barcelona: smooth to bumpy, quite a lot windier as well, different, higher temperature and weather conditions.

“There are certainly external factors that may have impacted or influence the performance of our car.

“But as Toto said, apparently he’s well-aware, we didn’t find the right window – if we can call it a window – or the right balance of the car.

“It’s something we need to try to understand.

“One thing we are certain of this day and this weekend is it’s not the real potential of our car.

“We are pretty sure the potential is certainly bigger and we have not been able to exploit it all through the weekend.”

Ferrari tried different set-up ideas from Friday practice through to qualifying but failed to find the breakthrough it was searching for.

Binotto said that this was “certainly unexpected” and that Ferrari needed to find a reason swiftly to ensure its slump is only a one-off.

“You’re always hoping to address and improve the situation through the weekend when you’ve got some issues with balance and the set-up,” he said. “It didn’t happen. We need to bring all the data back home and try to analyse it.

“That has to remain an exception all through the season. But I think it will be a good lesson learned.

“If we may identify where the issue was, we can be back even more stronger.”

Vettel and his teammate Charles Leclerc agreed with their team boss that there was reason to be confident heading to the next grand prix in Bahrain.

“We have all the tools, all the ingredients,” said Vettel. “We have a good car, we know it.

“This weekend we didn't, and overall we were not competitive enough, but we will be back."

New Ferrari signing Leclerc added: “It's not like we arrived with a very different car to testing.

“In the past, it has been seen quite a lot of times that it's a strange track and it's not always very representative of the real performance of all the cars here in Australia.

“I'm confident that we can come back.”