Lewis Hamilton threw away a potential Formula 1 victory at the Azerbaijan Grand Prix by accidentally pressing a "magic" button on his steering wheel. We investigate what that magic brake setting actually does.

Hamilton lost the win and the lead of the F1 drivers’ championship at the Baku restart after a dramatic Turn 1 lock up.

Just moments after surging to the front for the two-lap restart triggered by Max Verstappen’s crash, Hamilton’s front tyres locked up as he hit the brakes and he skated down the escape road.

After trailing home at the back of the field, Hamilton immediately told his team that he suspected what had caused the drama: the famous Mercedes ‘brake magic’.

He said over team radio: “Did I leave the magic on? I could have sworn I turned that off."

So what is this magic setting and what exactly does it do?

We’ve heard it referred to over the radio on many occasions, sometimes as a ‘magic paddle’, and George Russell last year talked about needing to hit the ‘magic button’ during his one-off appearance at Sakhir.

‘Brake magic’ is actually a button on the rear of the steering wheel that is a very clever tool to help drivers generate heat quickly for the front tyres.

When F1 moved to the hybrid power units in 2014, it did so knowing that the braking system would need to be overhauled too. For there needed to be more electronic assistance for brake balance, given the extra onus on energy recovery via the MGU-K. 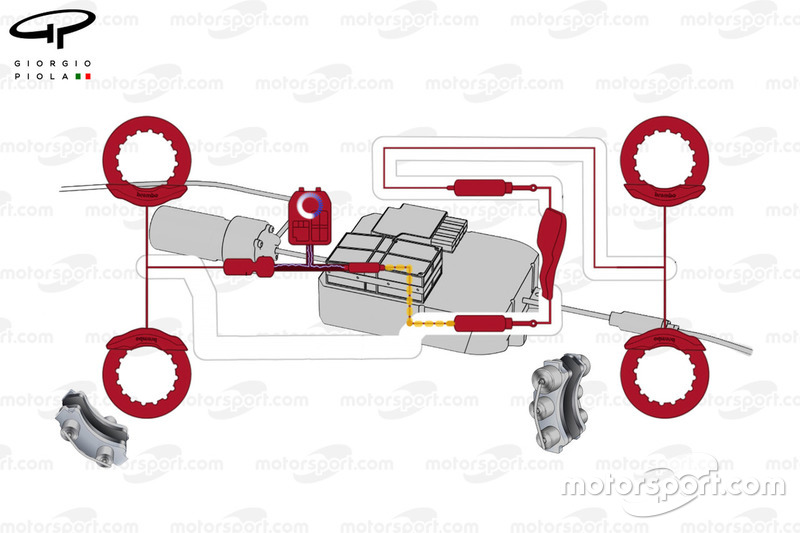 As a consequence, teams had to get used to using a brake-by-wire system, with separate maps created within the software to manage the front to rear brake balance, whilst also considering the prevailing level of harvesting being conducted by the MGU-K.

Whereas brake bias used to be controlled by a manual lever inside the cockpit, it’s a process that’s been shifted on to the steering wheel via control settings.

This requires the driver to select increments on dials along the bottom edge, which you’ll often see flash up on the steering wheel’s display when FOM is using the onboard shots. 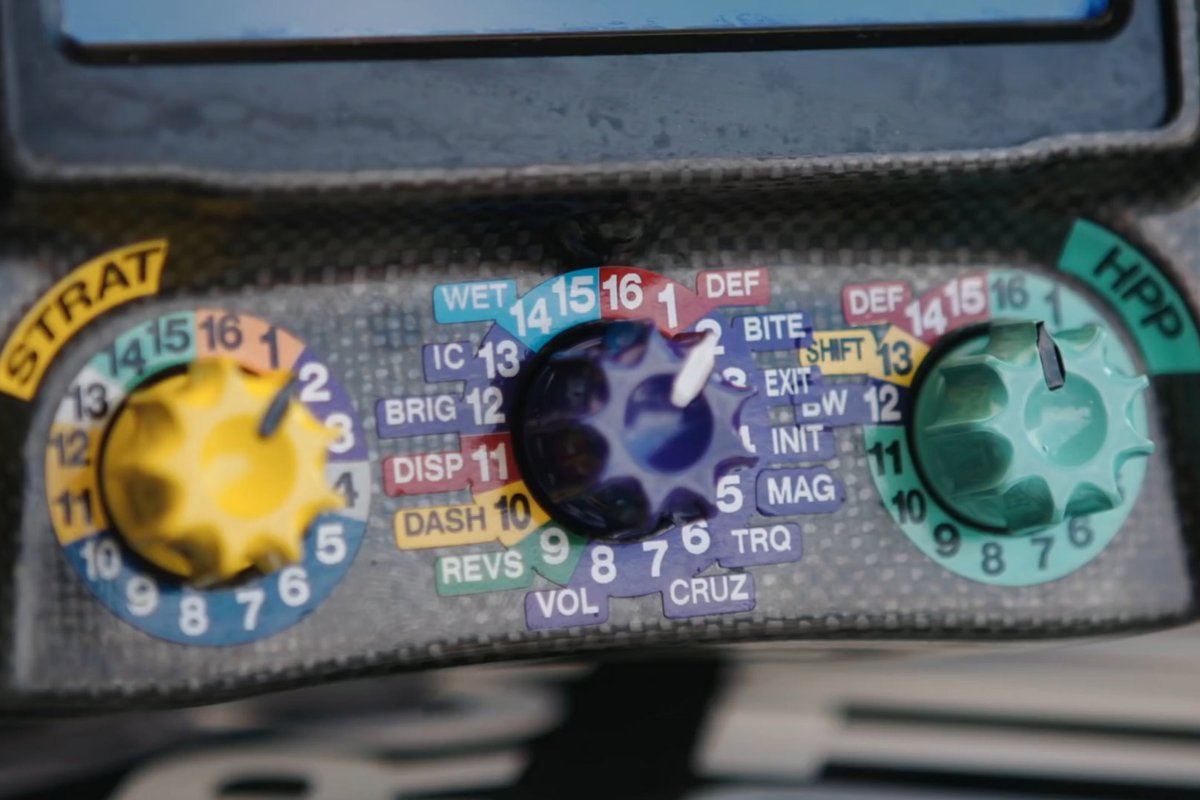 The driver has a few tools at their disposal in this regard, with a rotary and two buttons used on the Mercedes wheel for brake balance, and another rotary to select the amount of engine braking. 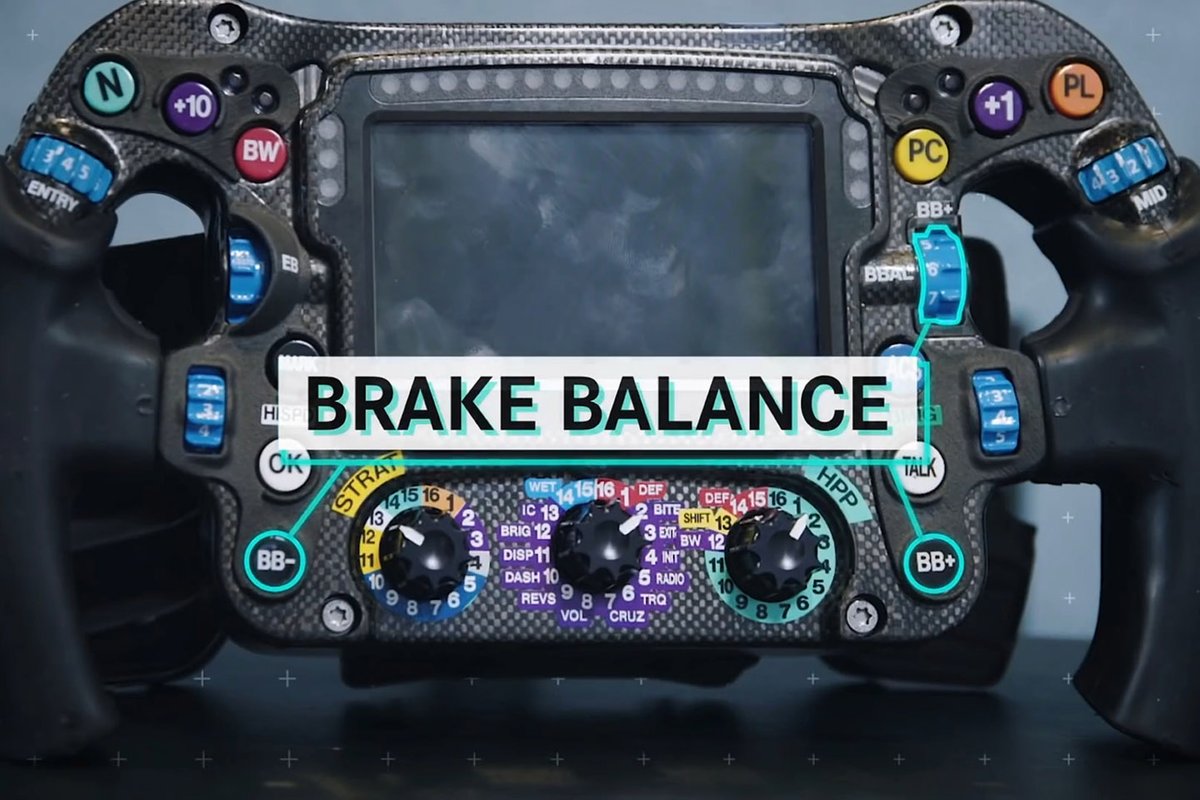 The magic button is an override setting though, and hitting it sends the brake bias much further forward than you’d ever use under normal race conditions.

It shifts the brake balance to around 90 percent of the front axle, whereas typically a driver would select between 55-60% during normal use. Once in play, the magic setting also prevents MGU-K from recovering energy.

It is activated as a way of transferring more of the heat generated by the brakes into the tyres, in order that they come into their working range quicker than if a normal setting was used.

In Hamilton’s case, he opted to use the brake magic function on the formation lap before the standing restart in order to heat the front tyres.

His success in having heated up the brakes (and tyres) was obvious by the way we saw the brakes smoking so much as he waited for the grid to form up behind him.

Once in his grid slot, Hamilton will have deactivated the brake magic function via the controls on the wheel and then set about preparing for the restart.

However, during the start, as he steered away from Sergio Perez in the run to Turn 1 he accidentally hit the ‘magic’ button – engaging the brake bias override.

This moved the brake balance forward and caused him to snatch the brakes into Turn 1, before sailing past the apex into the run-off area and effectively ending his chances of scoring points.

Mercedes’ post-race investigation will look into how Hamilton was able to reactive the magic setting, and that will potentially prompt tweaks to its steering wheel controls or software settings to ensure it cannot happen again. 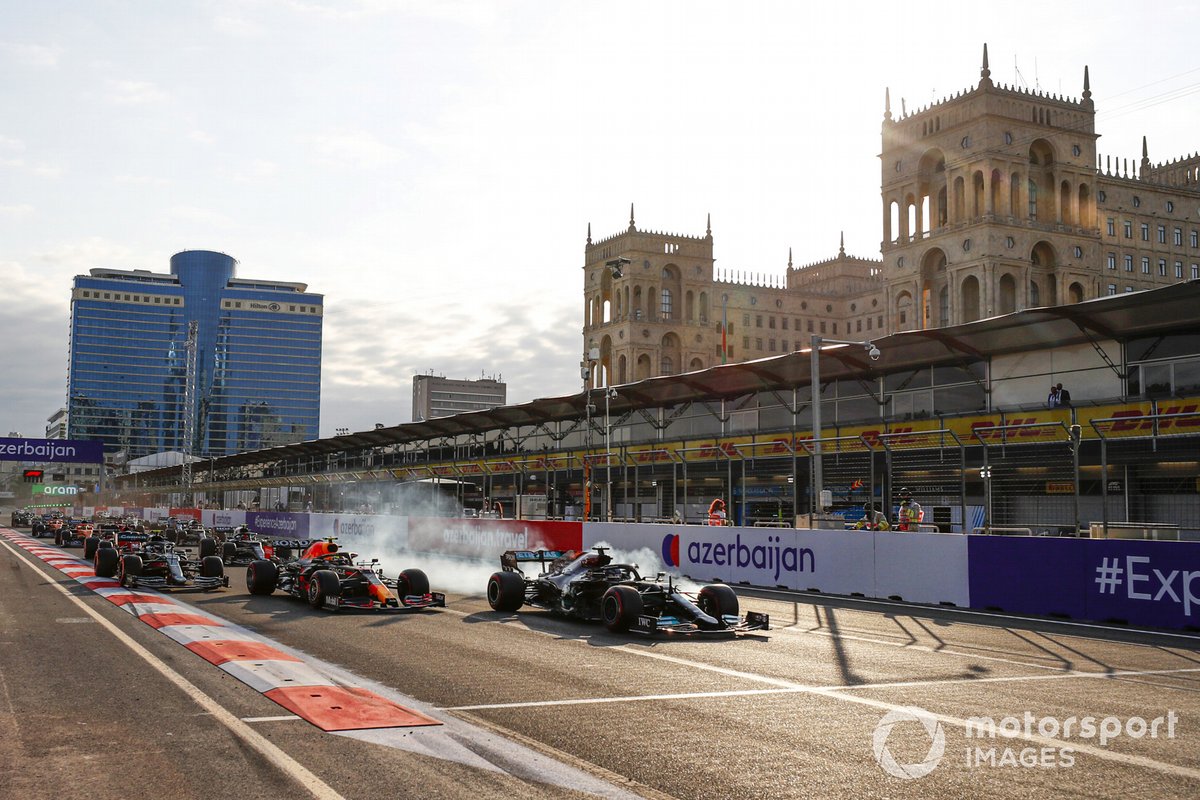 Lewis Hamilton, Mercedes W12, locks up at the restart

Why Verstappen's scepticism puts pressure on Pirelli to find answers