Why Verstappen's scepticism puts pressure on Pirelli to find answers

When Max Verstappen's failed Formula 1 tyre arrives back at Pirelli's Milan headquarters on Monday, the company's laboratory technicians will face some urgency in finding answers about what happened in Baku.

While the nature of two high-speed unexpected failures in the Azerbaijan Grand Prix was already enough for Pirelli to get to the bottom of the troubles, it was Verstappen's post-race comments that added to the intrigue.

With his stricken Red Bull still being returned to the garage, the Dutchman suggested that Pirelli would shake off its responsibilities for what happened and claim that debris was the cause.

"For sure [there will be talks with Pirelli] but we know the result from that conversation already and that's a bit hard to accept," he told Dutch TV.

"It will be related to debris, it's like that. I'm sure there will be talks, Pirelli isn't happy with what happened here today, but it doesn't change anything to the race and the result I got here."

Sure enough, when a few hours later Pirelli's initial diagnosis was that suspected debris was the cause of the failures to the Red Bull and Lance Stroll's Aston Martin, it drew a cynical response from Verstappen's father Jos.

Tweeting in reply to a story on Motorsport.com detailing Pirelli's explanation, Verstappen Snr posted: "They always say that."

Whether it is fair or not to suggest Pirelli is using debris as an excuse for its failures, what is clear is that the spotlight is on the Italian tyre manufacturer like never before to give a full and proper explanation about just what went wrong.

The implications for the world championship of the tyre failure could have been huge, and the lack of warning both drivers had to the problems has created some unease.

For Pirelli's head of F1 and car racing Mario Isola, there is no doubt that his company must do what it can to deliver answers before the French Grand Prix.

"The preliminary investigation is that it is probably due to an external factor, debris or whatever, kerb or whatever," he said. 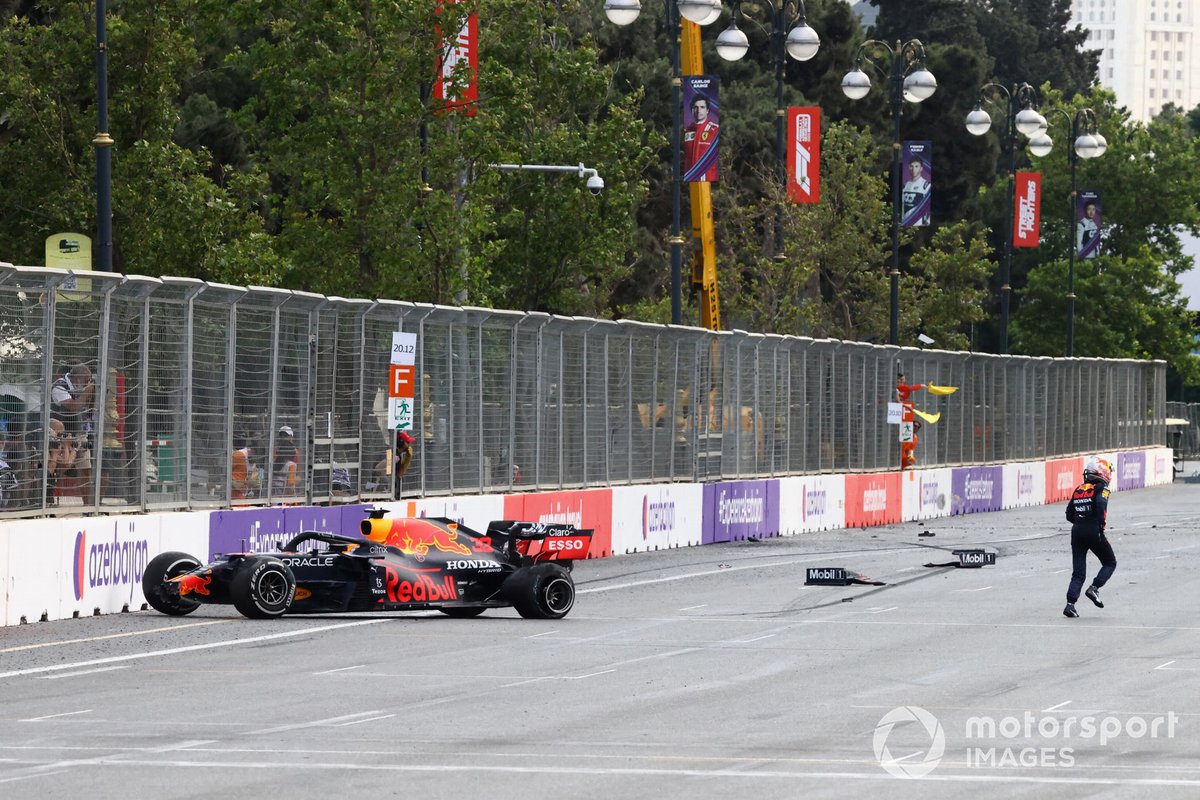 Max Verstappen, Red Bull Racing, climbs out of his car after crashing out from the lead

"But I don't want to jump to a conclusion now. The plan is to make a thorough investigation and come back to a report to the FIA and the teams that hopefully will be before Paul Ricard. I have to say, I will push to have a report, and obviously it is a priority, before Paul Ricard."

Verstappen's comments about debris being singled out as a consistent explanation for tyre failure is based on his personal experience.

At Imola last year, Verstappen was pitched out of the race with a similar instantaneous tyre failure, which Pirelli later suspected was caused by debris even though there was nothing obvious that the Dutchman had hit.

A few races before, Lance Stroll had had a massive crash at Mugello after suffering an unexpected tyre failure, while at the British Grand Prix, the closing stages were blighted by a number of blowouts.

The run of incidents in 2020 prompted the push for stronger and heavier tyres that Pirelli introduced for this year, in the hope of ensuring there would not be repeat trouble.

As Mercedes boss Toto Wolff said last year: "Lance Stroll's accident in Mugello was certainly frightening, and there was Max's DNF in Imola. Then we were just on the edge finishing a race twice with Lewis.

"Therefore coming up with a product that is more robust, and that means more heavy, is the only solution to that."

But are the Baku failures evidence that Pirelli's tyres haven't addressed the weaknesses shown last year, or is debris the actual reality?

Although the final answer will only come from the laboratories in Milan, who will use microscopes to analyse the remains of the failed tyres and those on other cars, Isola's early prognosis of debris being the cause is based on evidence of what he saw on Sunday night.

First, there was the fact that both Verstappen and Stroll suffered near identical left rear tyre failures which came totally out of the blue.

A 7cm cut later found on the inside shoulder of Lewis Hamilton's left rear during the red flag break was surely more than a coincidence that there was a debris problem.

There was also no evidence that pointed to the failures having been the result of wear (from having been run too long), nor or the tyres overheating/being overstressed.

On the wear front, neither Stroll nor Verstappen had run the tyres for especially longer than anyone else. Stroll's had failed after 29 laps, although they had been run on a full fuel load early on.

Verstappen had pitted for his hards on lap 12, which was one lap before teammate Sergio Perez and one lap after Hamilton, meaning they had run for 36 laps.

But other drivers had stopped much earlier: Lando Norris and Fernando Alonso on lap seven, and Charles Leclerc on lap nine. None of the tyres on those runners had shown any evidence of problems. 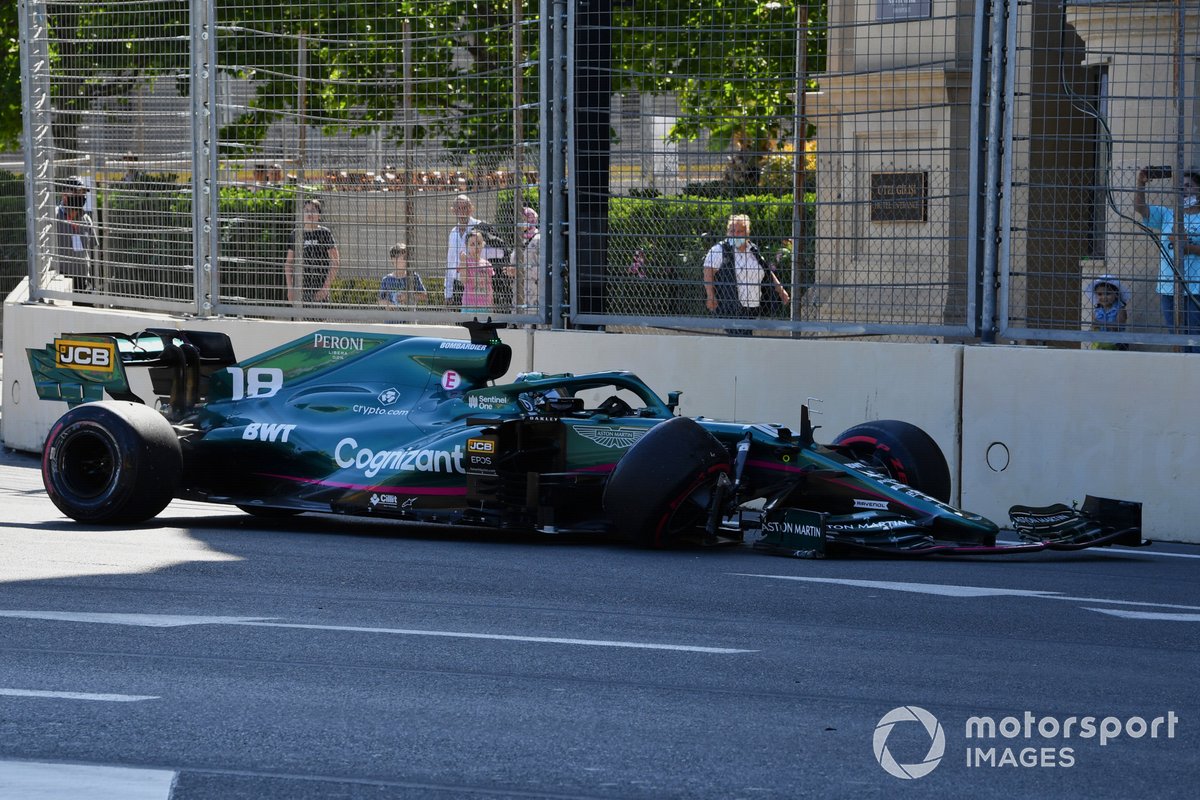 Then, regarding being overstressed, if that was a factor then it would be the right rear that would have been expected to fail first, as this is the tyre that is put under the most stress around the anti-clockwise Baku circuit.

Red Bull itself said that there had been no indication from the data, nor complaint from Verstappen, that the tyres were getting to the end of their life or being pushed too far.

Team boss Christian Horner said: "They could have lasted easy. From the durability that we could see, and for the way that Max driving the car, it should have been more than comfortable.

"The tyre wasn't being abused, the temperatures were all good. The race engineer had basically only just checked in with him to make sure everything was under control and then 'boom.' So it was totally unexpected."

An instantaneous failure does point towards the idea of debris causing the problem, something that is further embellished by the cut found in Hamilton's tyre.

Isola added about Hamilton's tyre: "It was clearly coming from debris. The tyre is still in one piece and you can see that the cut is not following any direction [of tyre rotation]."

"It is not something that could happen much earlier, and then they were running and losing air," he explained. "Otherwise you can see from the telemetry that they have a puncture. You would have a loss of pressure, which they didn't find."

Hitting debris on a track is also far more likely to happen on a street circuit than normal more open circuits. When pieces fall off cars on regular circuits, parts normally bounce off in to the grass run off area or gravel traps.

In Baku, especially on the start/finish straight, anything that falls off a car will be bounced off the walls and debris fencing and back on to the track, ready to be hit by the next car through.

Back in 2018, when Valtteri Bottas lost a victory after picking up a puncture when he hit debris on the straight, that piece was big enough to be spotted on television. 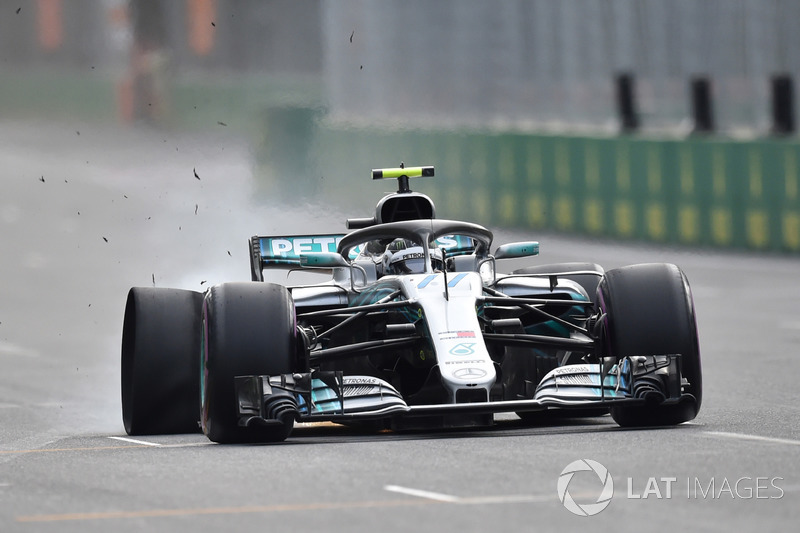 Pirelli will now pore over video footage, onboard cameras, and any photographs, to see if anything can be spotted as being a trigger for the Stroll, Verstappen or Hamilton problems.

A rogue kerb or drain edge could also be to blame. One theory is that Hamilton's tyre was damaged by debris from Verstappen's crash, while Verstappen ran over a piece left over from Stroll's accident. That would then leave Pirelli trying to understand what caused Stroll's issue.

Although telemetry data will offer few clues about when and if Verstappen and Stroll did run over debris, the forensic analysis at Pirelli may be able to understand things from looking closely at how the cut has developed - especially the Hamilton one. If the edges remain sharp and defined, then it is probably a fresh cut, as an older slice will have had its edges more roughed up.

What Pirelli needs now is answers, both for itself in ensuring its products are as robust as possible, but also to reassure fans, F1, the FIA and drivers that what happened in Baku was a freak event.

"We will do our best to do that as soon as possible," said Isola.

Whether the answers will be enough to end Verstappen's scepticism, though, will be another matter.