Lando Norris will bounce back from his Russian Grand Prix heartbreak a 'stronger' Formula 1 driver, says his McLaren boss.

The young Briton looked on course to win his maiden F1 race from pole position at Sochi on Sunday, as he held off Lewis Hamilton behind him in the closing stages.

But it all went wrong a few laps from home when a downpour arrived and Norris and his McLaren team left it too late to switch to intermediate tyres.

The delay cost him a lot of time and opened the way for Hamilton to take the win.

Norris eventually came home a frustrated seventh, admitting afterwards he was "devastated" at what happened.

Just a fortnight on from the disappointment of missing out on the chance to grab a victory in Monza, as teammate Daniel Ricciardo triumphed, the latest event will not have been easy to take.

But McLaren team principal Andreas Seidl is convinced that Norris won't take the let down to heart, and both he and the Woking-based squad will come out of the Russian GP better prepared for the future.

"I think it will we make him and the team stronger because it's these moments where you learn the most as a team," said Seidl, when asked by Motorsport.com on what impact recent frustrations will have.

"It's always easier if everything goes to plan. A moment like this is a big disappointment, but an opportunity to learn and to do better as a team together with Lando next time around.

"It's part of the sport. It's no different from junior categories where things like this happen and there are big disappointments - especially when he was so close to something really big.

"But I think he has enough experience, and the team as well, in order to come back out of this even stronger."

Norris appeared to have the win in the bag as the laps counted down, with Hamilton behind him struggling to get much closer to the McLaren.

And while there is little reason to think that Norris would not have held on if it had stayed dry, Seidl says he will waste no time wondering about what might have been. 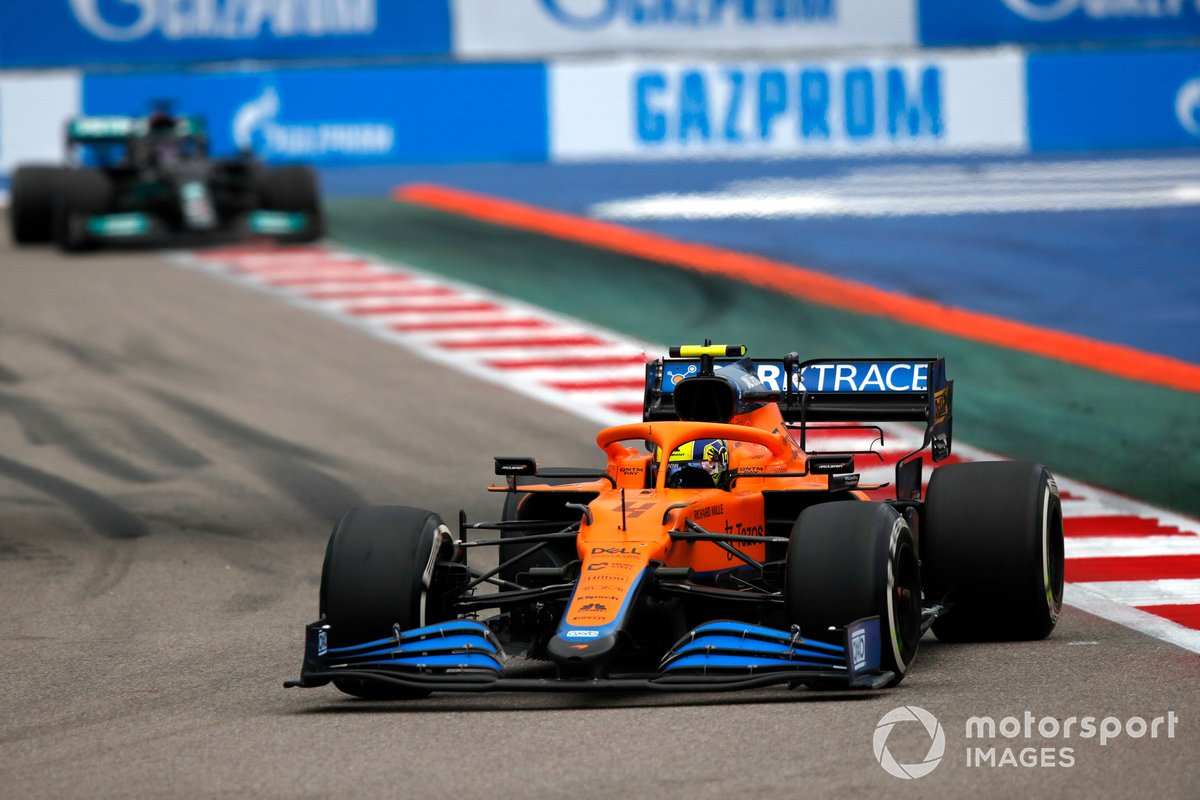 "I'm a guy that is not wasting energy with could have, should have," he said.

"You have to look at the facts, and you have to do an analysis on what we could have done better, and then you reset and go again.

"I'm not wasting any time thinking about what's possible, for example, to win his first race. He's disappointed, we're disappointed with the outcome of the race, with the last three laps. But frustration, disappointment, that doesn't move you forward."

Seidl said that he always knew that McLaren's progress up the F1 order would hit some hurdles at times, but it was something that he thinks will only serve to be a benefit longer term.

"Part of this journey is that you have to accept that it doesn't always go onwards and upwards," he said. "It's a normal part of the sport. And you have days like this, which was a big disappointment.

"But it's also an opportunity to stay humble and to stay both feet on the ground.

"What is important is to keep respect for all your competitors as well, to simply keep learning. And again, with everything that I'm seeing from the team, I'm very, very happy and very confident that once we have everything in place that we need in our journey, we will be in a position to fight Red Bull and Mercedes again regularly.

"And obviously it's great to see that already now occasionally, depending on the tracks as well, we are actually in a position to fight for pole positions or for a race win."