Why Sainz escaped penalty for "muscle memory" DRS use 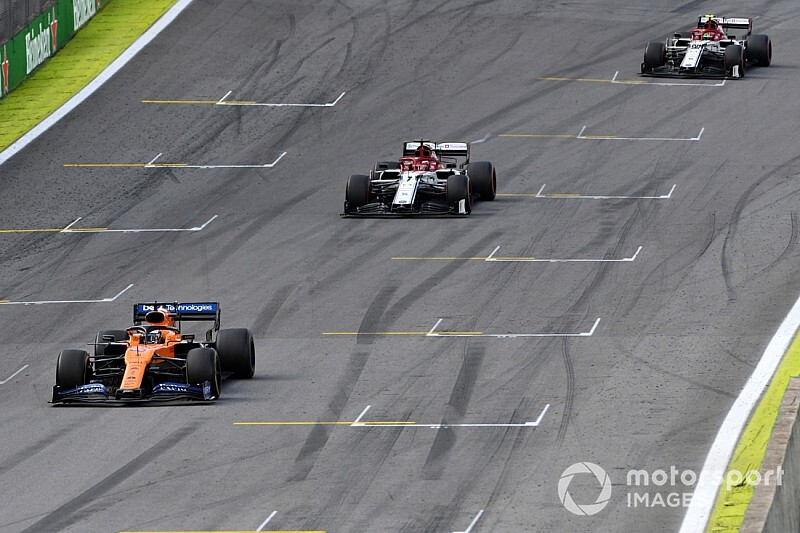 Sainz was one of eight drivers whose DRS usage was looked at by the stewards after the race, although in the end no formal investigations were opened, and no penalties followed.

The subject of opening DRS under waved yellows was brought to the fore in Austin, where Daniil Kvyat kept his open when flags were out after Kevin Magnussen’s incident. The Russian was able to close up on Sergio Perez, leading to a collision immediately afterwards.

Kvyat received a penalty for the contact, but not for having his DRS open, despite it suggesting that he was not slowing down enough, as the rules require.

That incident triggered a lengthy debate in the drivers’ briefing in Interlagos, where the consensus was that opening the DRS under waved yellows did indicate that a driver wasn’t slowing and thus could trigger a penalty.

However, there is no specific mention of DRS in connection with yellow flags in the current sporting regulations.

In the Brazilian race, Sainz opened his DRS when flags were out after Valtteri Bottas stopped on lap 53. At the time he was being followed by Kimi Raikkonen, who reported what he’d seen to the team. Alfa Romeo team manager Beat Zehnder subsequently alerted the stewards.

After the race, the stewards looked at the data of Sainz and seven other drivers who may have opened their DRS or not slowed sufficiently. However, they decreed that all had in fact complied with the requirement to slow.

“I think it was eight, all in that area,” said race director Michael Masi when asked by Motorsport.com.

“We looked at it, and the overriding factor with double[-waved] yellow flags is the requirement to slow and significantly slow. And that's what we looked at with all of them. And all of them complied with that. Yes, a couple of them did activate DRS for a relatively short period of time, but I'll call it muscle memory!

“So the stewards looked at that and determined that no investigation was necessary, and that the overriding factor of slowing for double yellows was absolutely complied with.”

Masi acknowledged that drivers had been warned in the drivers’ briefing.

"The discussion on Friday was that the expectation is that DRS isn't used in a double yellow flag, but the overriding factor is to comply with the double yellow requirements. Because I think if you look at it, having DRS open is against the philosophy of slowing.”

Asked if the FIA might review the sporting regulations, possibly incorporating a reference to DRS, he said that it was already under discussion.

“It's something that we've already started discussing, you know, collectively, of that component of it, how we do it. I think the way that double yellows and so forth, and they required to effectively give up the lap in qualifying works well, in the race, obviously a little bit more difficult to do that. But it's something that certainly needs more refinement.

“It's one of those things, you can't make a rule to suit every situation is the reason why we have stewards to make a determination on things and the overriding factor is that they slow which they all did.”

The FIA system switches off the DRS for all drivers under a safety car situation, but it is not able to do it for a single DRS zone under waved yellows.

“There isn't the ability – and it's probably the other way - of isolating single DRS zones to turn them off. It's either they all get turned off or not. The technical reasons for it? If it was easy to have been done, it would have been done.”

Bottas faced with threat of grid drop for Abu Dhabi