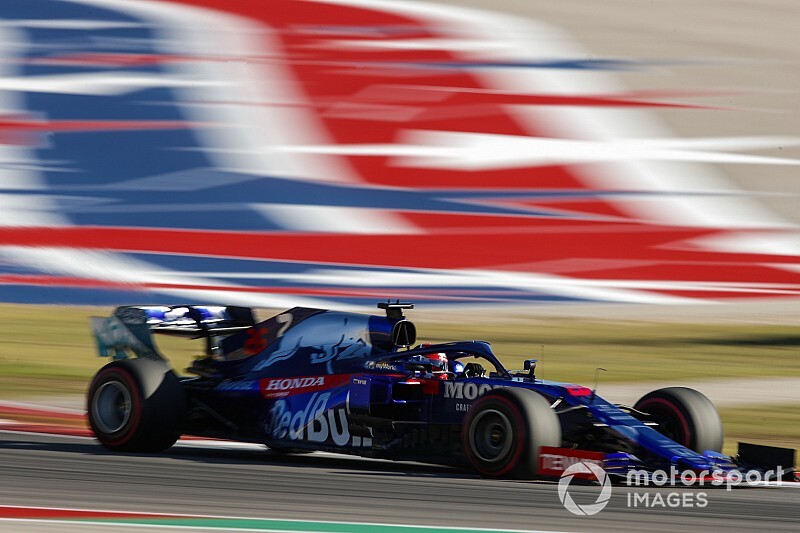 Toro Rosso Formula 1 driver Daniel Kvyat has been denied a point-scoring finish by a post-race penalty for a second event straight in the United States Grand Prix.

Kvyat had got past Racing Point driver Sergio Perez late on - making contact and pushing Perez wide after launching it down the inside of the sharp Turn 15 left-hander - to finish the race at the Circuit of the Americas 10th on the road.

However, by then he had been placed under investigation by the stewards for causing a collision.

He was assessed a five-second penalty shortly after the chequered flag, which dropped him down to 12th place.

Perez thus inherited the final points-paying position, while Alfa Romeo's Kimi Raikkonen was also classified ahead of Kvyat in 11th.

Kvyat also picked up one penalty point for the incident, taking his 12-month total to five.

"The Stewards reviewed video evidence," the FIA verdict read. "Car 11 [Perez] was in front immediately prior to the apex of the corner, car 26 [Kvyat] 'dived' down the inside, had a small lock-up and bounced off the kerb, which moved the car to the outside of the exit of the corner, colliding with car 11."

The sanction comes a week after Kvyat was demoted from ninth to 11th due to a last-corner clash with Renault driver Nico Hulkenberg.

That penalty decision had drawn criticism from the Russian, who felt that it was in violation of F1's 'let them race' policy and blamed the stewards for "killing the sport".

Toro Rosso's other driver Pierre Gasly retired with damage after having a clash with Perez while trying to hang on to ninth place.