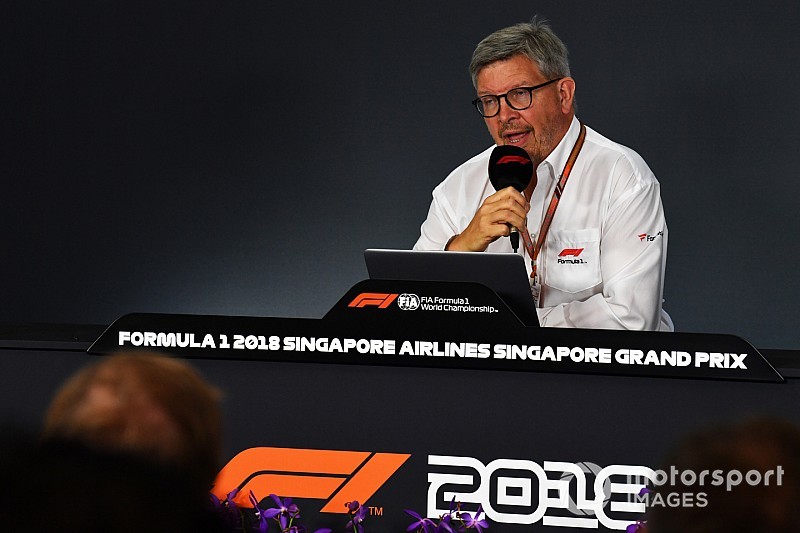 Ross Brawn has not ruled the DRS out of the 2021 Formula 1 rules package, despite previously expressing his dislike for the device and hoping it wouldn't be needed.

Under the direction of Pat Symonds F1's team of engineers is currently working with the FIA and the teams on honing the 2021 rules, with a focus on allowing the cars to race while making them look exciting.

Three concepts for 2021 were officially revealed at the Singapore Grand Prix on Friday, and Brawn says the research suggests the cars will be able to follow each much more closely, but that won't necessarily mean F1 will be able to dispose with DRS.

"I think we can keep that in our pocket," he said. "I'd like to think we could reach a stage where DRS doesn't become so critical.

"But it is a very easy thing to have or not have if we find the cars are able to battle with each other.

"Overtaking is the culmination of course, but having a great battle is critical, and where you have cars where they cannot follow each other consistently because the tyres degrade and because of the loss of performance, then you don't have such great battles.

"We have made an effort to make sure we distinguish the difference between overtaking and racing.

"Often racing will culminate in overtaking. At Monza I saw some statistics the other day and about half the overtakes were with DRS, and half were without.

"So there was plenty of action at Monza, but it is a unique track in that respect. We need more tracks where the cars can do battle."