May 23 (GMM) Ross Brawn should be firing on all cylinders as he returns to the pitwall in Monaco this weekend. 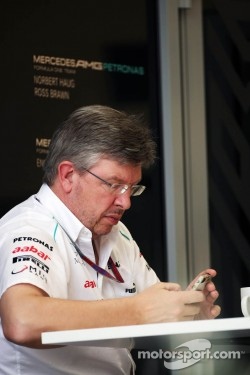 Mercedes' team principal sat out the recent Spanish Grand Prix due to illness, but a scarcity of extra information triggered speculation.

One rumour was that he is seriously ill, whilst another was that his absence may in fact be due to his German employer's high-stakes spat with Bernie Ecclestone.

The latter theory gained traction since Barcelona, with acting team boss Nick Fry taking a much higher than usual profile, including naming Paul di Resta as a possible 2013 successor for Michael Schumacher.

Explaining his absence, Brawn told Bild newspaper: "On the Tuesday before Barcelona I felt unwell so I went to the doctor and then stayed a night in hospital for some tests.

"When I got home, I decided on the advice of doctors to give myself a weekend off, to be sure that I am fit for Monaco," the Briton said.

Partly because of Brawn's deputy Fry's recent comments, and also due to his paltry points tally and his crash with Bruno Senna, rumours about Schumacher's future have intensified since Spain.

"A lot has been said and written," acknowledged Brawn, "but we should not forget that we - the team - have let him down in three of the fives races, not delivering the job we should have.

"We must do better," Brawn, who worked closely with Schumacher during the seven time world champion's ultra successful Ferrari era, added.

"We saw Michael's real quality again in the first race, so it's for that reason that I believe we will see him on the podium this year."

As for a possible contract extension for the 43-year-old, Brawn insisted: "When the time comes, we will sit down together and talk about the future.

"I'm sure it will become clear very quickly in what direction we will go."