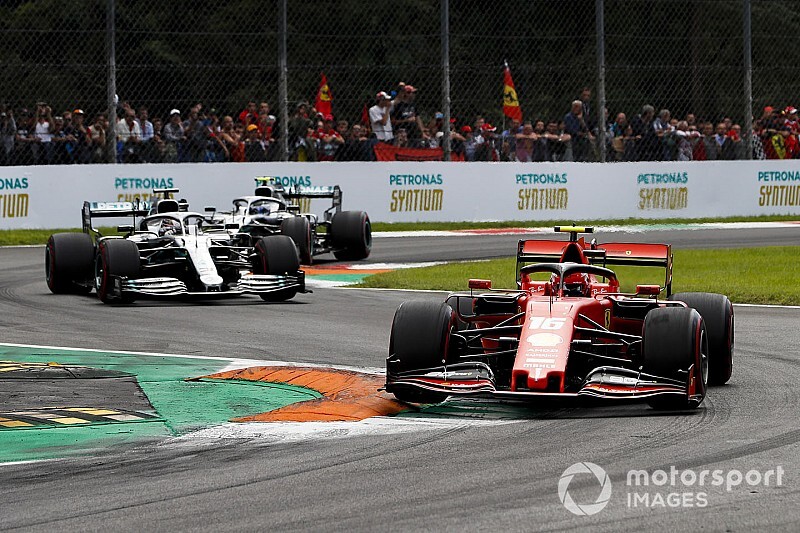 Valtteri Bottas's failure to heap more pressure on Charles Leclerc has highlighted a weakness he has in getting the most out of his car when closely following a rival, says Mercedes boss Toto Wolff.

The Finnish driver had hauled himself on to the tail of Leclerc in the closing stages of the Italian Grand Prix, but was unable to mount a proper attempt at a pass as he could not get quite close enough.

In the end, his hopes of a win were dashed when he misjudged his braking point slightly at the first corner and ran deep in to the chicane, costing himself valuable time.

Wolff says that the way Bottas could not threaten Leclerc as much as Hamilton did earlier in the race highlights an aspect of his driving that needs improving.

"It looks like he struggles a little bit when he gets in the wake of the car, to extract the maximum," explained Wolff.

"Lewis somehow in that position is able to somehow get closer and put himself in a position to go for a move.

"It's something he's got to work on. But on the positive side, his racing was great. He was really fast. Probably in pure race time, the fastest car."

Despite running on fresher tyres in the closing stages of the race, Bottas says his rubber was past his best as he got closer to Leclerc – and says he was lacking 0.5s of pace per lap to have a proper chance of getting past.

Speaking about that stage of the race, Bottas said: "Ideally I would have done more tyre management, but if I wanted to have a shot of winning the race I needed to push to catch them, and that was at a cost of some tyre drop-off.

"I felt the last four laps I had a big drop-off with the medium tyre, so that made it more tricky. When I got close enough I was having some front locking under braking. Lewis had a similar issue as well, he went straight when I got him.

"From all calculations, to have a proper chance to overtake you need one second pace difference and I had a maximum of five tenths by the time I got close to Charles. It was tricky, I tried everything I could, but it was a bit out of reach today."