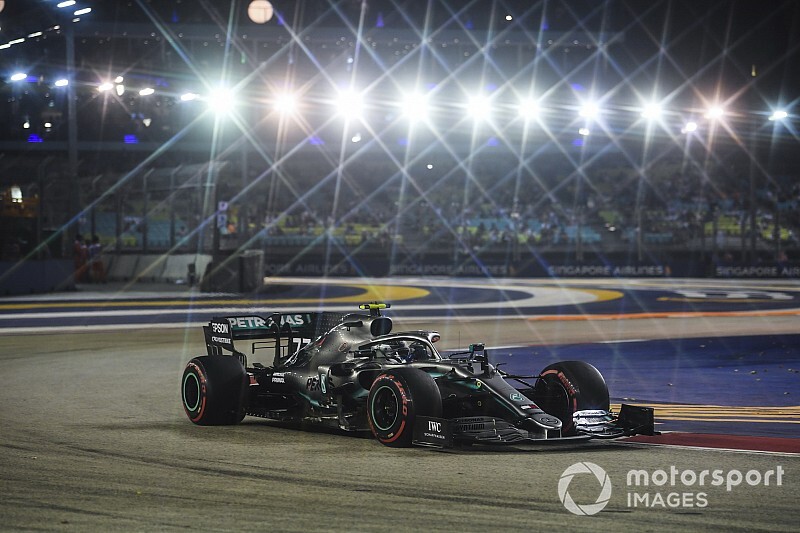 Valtteri Bottas believes his Mercedes Formula 1 car wasn't "100 percent" in the second Friday practice session in Singapore, having required a rebuild after an FP1 crash.

The Finn was ruled out of the opening practice early when he lost the rear of his W10 at Turn 19 and clattered the outside barrier with the left side of the car.

He ended that session four tenths behind teammate Lewis Hamilton, but would then trail the Briton by more than a second in FP2.

"It was a tricky one," Bottas said of his Friday. "Had a bit of an off moment in FP1, which ended my running a bit early, but everything was feeling okay until then, just lost the back end in one of the corners, and obviously here with no run-offs you pay the price.

"FP2, not sure really what was going on. Was lacking pace, every single run, every tyre compound, so I'm not quite sure if everything was right in the car, need to have a look.

"Just felt like I couldn't go any quicker, but I was one second off the pace.

"The only thing I could really feel, I just felt quite a bit of friction in the steering system. So, I struggled to feel the car properly. I doubt everything was 100 percent, but obviously need to have a look [at] what I can do better as well."

Hamilton said driving his Mercedes at Singapore was "a shock to the system" due to heat, humidity and the length of the lap - but the championship leader nonetheless enjoyed a very positive day.

"I was really happy," Hamilton said. "I felt much better in the car today than I have for a while. I hope that [feeling] stays over the weekend.

"But we've definitely got some areas where we can improve, which is always good. And nothing's ever perfect, so I've got to go and kind of study areas we can improve on the car, but also areas I can improve, like braking, turning points, et cetera."

Hamilton said he was wary of the threat from Red Bull, whose lead driver Max Verstappen finished just two tenths behind him in FP2.

"I mean, I was quickest in that session, but they were very, very close behind us.

"Whether or not he had a perfect lap or whether we were more turned up than them, I'll find out now [in the debrief]."