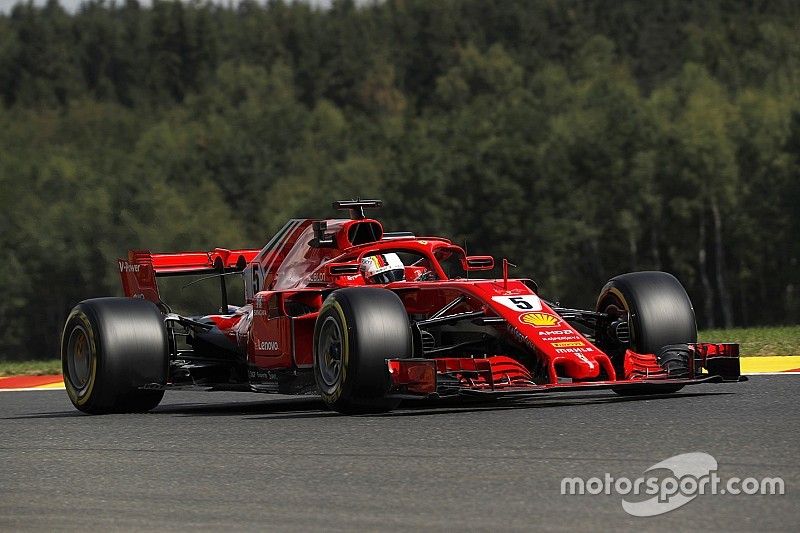 Ferrari's Sebastian Vettel set the fastest time in the opening practice session for the Belgian Grand Prix as Formula 1 returned from its summer break.

Hamilton's teammate Valtteri Bottas hit the top of the pile at the end of the opening half an hour with the first sub-1m45s lap, a 1m44.998s on softs.

That was quickly replaced as the benchmark by Hamilton's 1m44.676, also on softs, which stood as the four-time world champion's best lap of the 90-minute session as he chose not to use the supersoft tyres.

His rivals did, which allowed Vettel and Verstappen to overhaul Hamilton before the session's end.

Vettel only lapped 0.3s faster than Hamilton when he popped in a 1m44.358s, with Verstappen neatly splitting the gap between the two titles rivals.

That gave Red Bull some cheer to counter the problem that struck Daniel Ricciardo's car, as an engine problem confined him to the garage for most of the session and restricted him to just one flying lap, which he used to jump to sixth right at the end.

That put him behind Kimi Raikkonen in the second Ferrari and Bottas, who was shuffled back to fifth as he avoided the supersofts and made a slight improvement on mediums.

Esteban Ocon gave the 'new' Racing Point Formula 1 team a strong start to its 'debut' weekend with the seventh-fastest time.

Sergio Perez backed up teammate Ocon in ninth, with Carlos Sainz completing the top 10 after a late improvement in the second Renault.

McLaren 2019 hopeful Lando Norris made his grand prix weekend debut with the team, driving in place of the outgoing Fernando Alonso in FP1.

He set the 18th-fastest time, 3.006s off the pace but less than a tenth quicker than teammate Stoffel Vandoorne.

Norris and Vandoorne are vying for the second McLaren seat alongside Sainz next season, with Ocon also a contender.

Vandoorne, who moved to quash speculation suggesting he could lose his McLaren drive as early as next weekend in Italy, was hampered by a brake problem early in the session.

He then lost more track time at the end of the session as the team removed the floor to investigate a suspected leak.