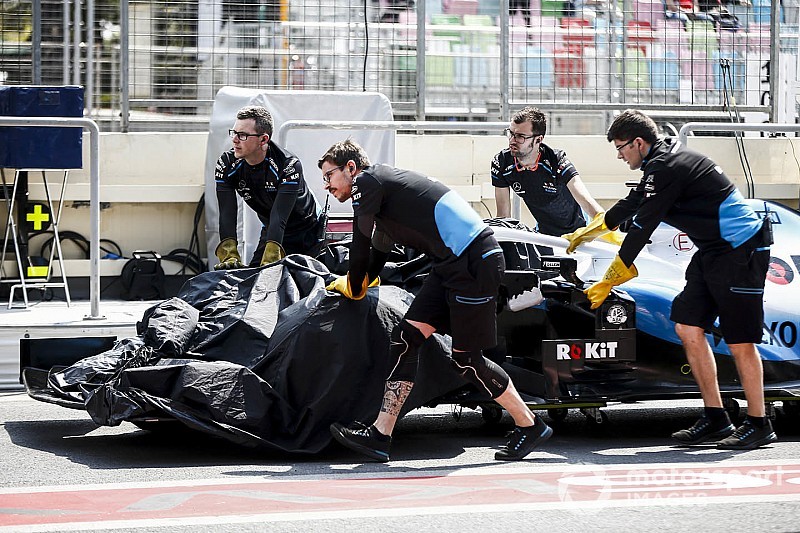 The drain cover that George Russell hit and led to the abandonment of Formula 1's first Azerbaijan Grand Prix practice session was dislodged because of a broken mounting.

Russell's Williams struck the errant drain cover on the approach to Turn 3 early in the opening session in Baku.

Following an investigation into the cause of the incident, the FIA has determined that a "break on an underside mounting" led to the drain coming loose.

Russell's drain strike caused considerable damage to the car and the session had to be abandoned while the FIA carried out checks on all 360 of the over drain covers around the circuit.

No further problems were discovered and no reinforcements had to be made. The drain covers will be checked again now that the second session has been completed.

Williams has had to change Russell's chassis following the incident, which caused him to miss FP2.

As well as the vital lost track time, Russell needs a new floor and other bodywork fixes, and a "precautionary energy recovery system module change too".

While the chassis can be repaired back at the factory, the cost of the replacements is significant to Williams, which had only just caught up with the development of spare parts following its late car build and last-minute changes to the design to ensure legality.

After the incident, deputy team principal Claire Williams said conversations would take place to assess what compensation her team could seek.

The circuit is responsible with ensuring it is fit for purpose, so the FIA – in charge of overall safety – is not at fault.

Last year Haas successfully received compensation from the Sepang circuit for its own drain-related incident back in 2017.