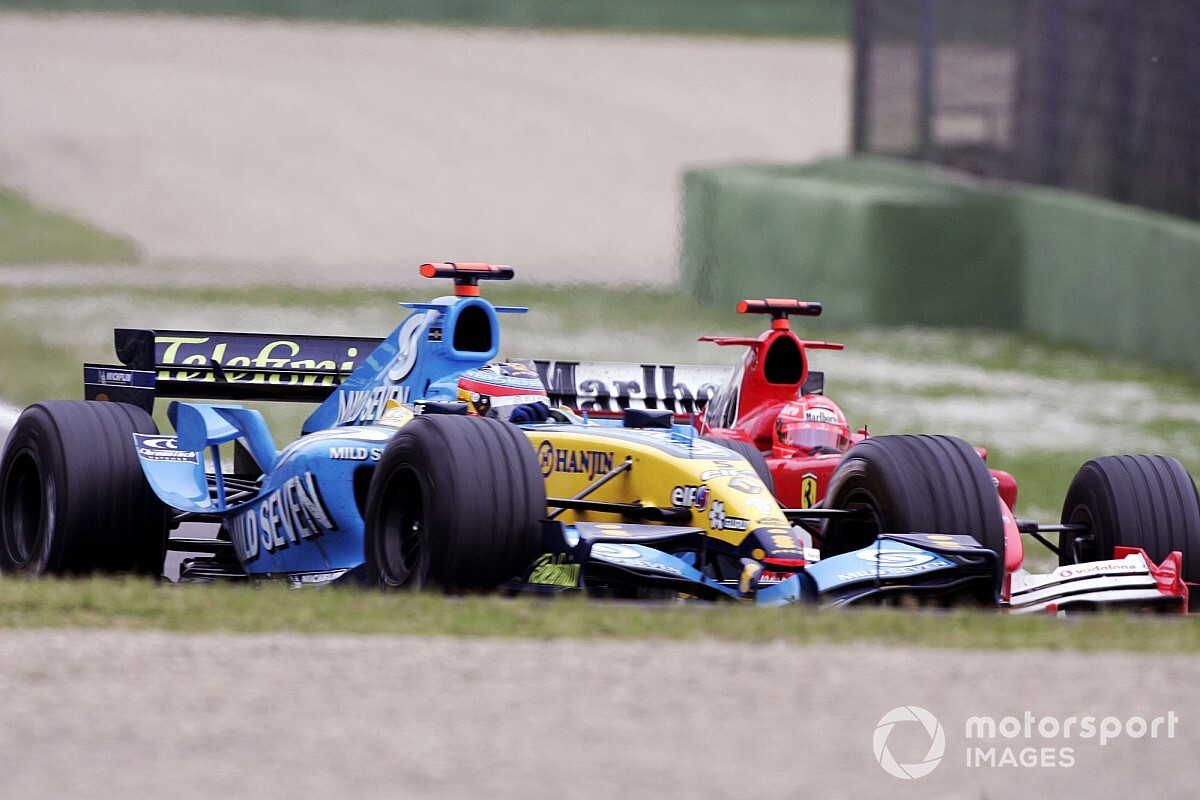 On April 24th 2005 upstart Fernando Alonso and seven-time Formula 1 World Champion Michael Schumacher went head-to-head in the San Marino GP – and the youngster just came out on top after a brilliantly judged drive.

It was the first time that the two had fought so closely for a race victory all the way to the chequered flag, and Alonso’s superb win appeared to signal a changing of the guard.

We didn’t know it at the time but Imola was to be a rare high for a Ferrari team strangled by that year’s tyre regulations – Alonso’s main title opposition was to come from McLaren’s Kimi Raikkonen, who should have won the San Marino event.

The 2005 season was defined by a new regulation that required drivers to qualify and complete a race distance on the same set of tyres – essentially an easy way of reining in development and hence speeds.

For years Ferrari had benefited from its close relationship with Bridgestone, with access to tyres that allowed Schumacher to take full advantage of Ross Brawn’s strategy calls by sprinting flat out between pit stops. When the new rules handed an advantage to Michelin, it was a new era.

At the age of 23, Alonso’s time had come. He’d scored his first win with Renault in Hungary in 2003, and while there were no victories in 2004 – a year utterly dominated by Ferrari – he finished fourth in the World Championship, and momentum was building.

Renault got off to a flying start in 2005. Giancarlo Fisichella won the opening race in Australia from pole, with Alonso gaining useful points in third after bad luck in a drying session saw him start only 13th. The youngster then took pole and won in both Malaysia and Bahrain. 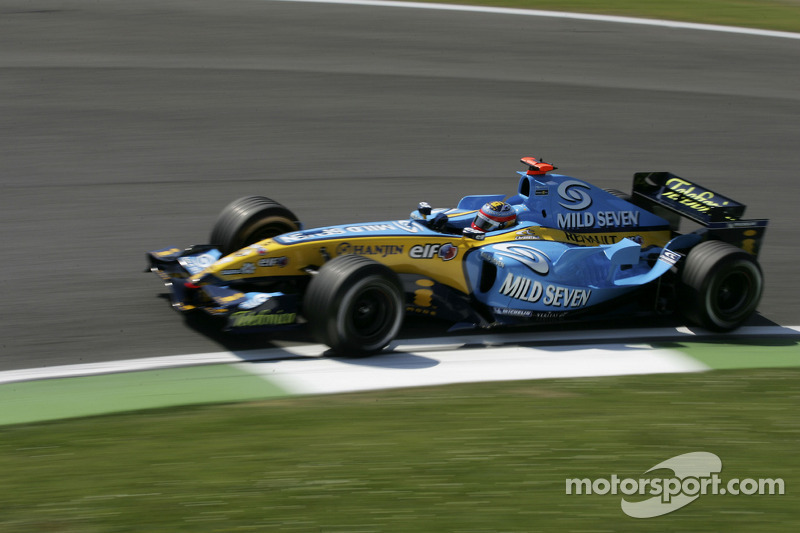 Schumacher scored just two points in the first three races with a seventh in Malaysia, although his teammate Rubens Barrichello did at least earn a second place in Australia. It was clear that Ferrari, which ran the first two races with an interim car before pre-empting the planned introduction of the latest model at round three in Bahrain, was struggling.

“We came to Melbourne with our old car so it was clear to me we would not fight for victory there,” Schumacher told me at the end of that year.

“At least not to my expectations. Obviously, with my bad luck in qualifying, that race wasn't exactly an ideal one. But to be honest, I knew before the season started that it would not be a good one.”

Regarding the switch to the new car he added: “Let´s put it like this. I knew it would mean a big step forward, and I knew we would need a big step, too.

“But I knew the new car from testing and knew about the problems we sometimes had there. There was not a surprise in the very first races, as we clearly had rushed very much to use the car.”

A return to form in Imola on the second outing for the F2005 was desperately needed.

In those days F1 had aggregate qualifying, with solo one-lap sessions on Saturday afternoon and Sunday morning – the latter featuring the race start fuel load.

Just to add to the challenge under the 2005 regs, engines had to last for two race weekends, or a 10-place penalty would result. That was quite a stretch in the V10 era, entailing careful management of mileage.

Saturday went well for Ferrari on home ground, with Schumacher taking third in Q1, but on his Q2 lap on Saturday morning he went off and lost crucial seconds. He was left a frustrated 14th overall, seemingly well out of the fight for a win.

Meanwhile Renault was knocked off pole for the first time in 2005. McLaren had successfully addressed a lack of one-lap pace, allowing Raikkonen to take the top spot, ahead of Alonso. The Finn had salvaged only a third place from the opening three races, but now he was a serious factor.

Alonso had faced a serious handicap. His engine had taken a battering in the heat of Bahrain, and to get through the Imola weekend without a penalty he had to ration mileage and run less than optimum settings.

“We didn’t do many laps in practice,” Renault technical director Pat Symonds told me. “There was some damage done to Fernando’s engine in Bahrain. We didn’t run everything flat out this weekend. It obviously has some effect in terms of time, but it’s not huge.

“The fact that Fernando’s qualifying lap was his 11th timed lap of the weekend - how do you quantify what that’s worth? It’s probably quite a lot. So I wouldn’t say we were as well prepared as normal this weekend.”

Raikkonen led from the off, but after nine laps he had a driveshaft failure. He had fuel to run a couple of laps longer than immediate pursuer Alonso – had he not retired, he would almost certainly have won the race.

Alonso was left with a handy lead. He came in for fuel on lap 23, leaving BAR’s Jenson Button briefly in front until he too pitted. Schumacher hadn’t appeared to be a win contender early on, but he picked up places and speed through the first stint. He had a clear track before his late first stop, which came four laps after Alonso’s.

In fact he made such good progress after the stop sequence played out, and helped by a Toyota “Trulli Train” holding up several cars, he jumped up from 10th to third, with only Alonso and Button now ahead. 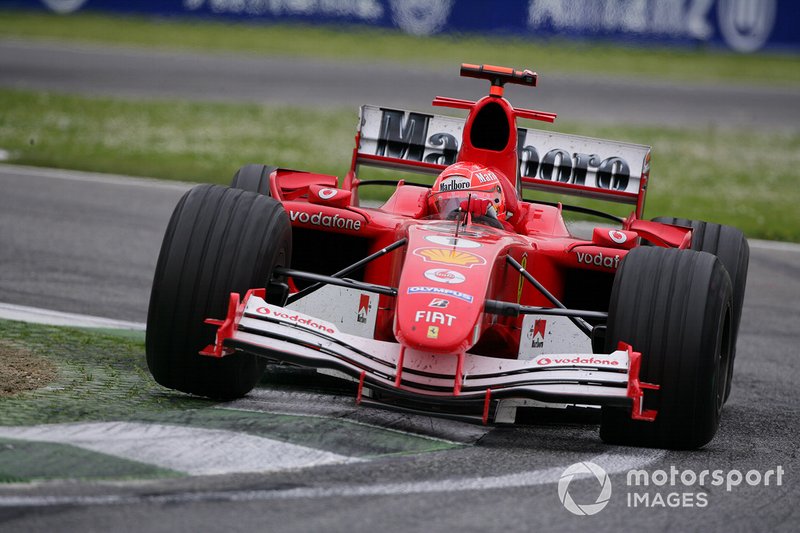 To the delight of the tifosi, Schumacher was flying, and he soon reeled in Button. Out front, Alonso made an early second stop on lap 42, so Button and Schumacher ran one-two for a while, until on lap 47 the lead changed on track. A couple of laps after that, Schumacher pitted, coming out in second place – right behind Alonso.

It was now a 12-lap fight to the flag. Schumacher had the quicker car, and Alonso, mindful throughout of his fragile engine, had to use everything in his armoury to keep the Ferrari behind.

“We had to set lower limits, and we couldn’t change them,” Symonds said of the engine restrictions.

“We would have had a bit more in hand, but don’t get it wrong, we didn’t have enough in hand to match the pace of Michael. Lap 28-48, when he was catching Jenson, we had nothing to match that.”

Schumacher had briefly pressed Alonso in the early laps in Bahrain before retiring, but he had little banked knowledge of his rival on which to draw as he tried to find a way by.

The Renault driver’s tyres didn’t have the required pace in them, but he judged it brilliantly, never leaving the door open, with superior traction in slow corners giving him a useful boost. Even the wily Schumacher couldn’t find a way by, and Alonso just made it home in front – by only 0.2s.

“It was good!,” said Symonds of his man. “That’s what race craft is all about, isn’t it? Everyone says there should be more overtaking in F1, but today I was pleased there wasn’t!”

Symonds admitted that after the opening races of the season, he hadn’t anticipated that Ferrari would be so competitive at Imola.

“It was a surprise, there’s no doubt about that,” he said. “We kept saying they will be strong, but I hadn’t expected that sort of performance. But Imola is a bit of a strange circuit.

“And you know it is true that you have ups and downs when you have people on different tyres. I think back to Fernando’s win in Hungary in 2003, when Ferrari were nowhere. Ferrari weren’t nowhere, it’s just on that particular day, things didn’t work.

“Today it did work for them, they were very, very quick.” 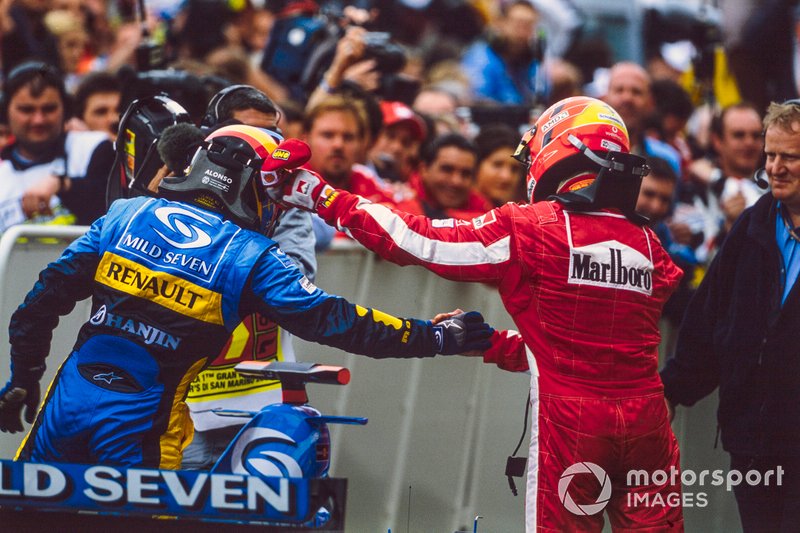 Imola was to be something of an outlier. In Spain it was Michelin user Raikkonen who set the pace and won for McLaren, setting himself up as Alonso’s title challenger.

Looking back at the end of the season, Alonso reflected on his Imola win.

“I think that Ferrari found very special conditions in San Marino that worked perfectly for them,” he said. “It is not normal for one car to be so fast compared to every other car in the field, not just ours.

“Imola was one of the best races in the championship, a very close finish between two cars. I had some difficulties with the tyres and the engine in that race, so I was running quite slow at the end of the race, and Michael didn’t overtake me, so I was very happy and optimistic with this result.

“We all expected Ferrari to be in a dominant position again, like in previous years. But after maybe four races the team had won all of them and I was quite confident that the 2005 season was the opportunity for me. But you never know until the last moment because, as we saw, the McLaren started to be quick.”

Remarkably Schumacher’s only win of 2005 was to come in the notorious US GP, where the Michelin runners failed to start. At the end of a frustrating season he admitted that Imola had been a rare highlight.

“First of all, it was a great race from Fernando,” he told me. “Like over the season, he was driving very strong mentally. All I could do when finally being behind him was just pushing and hoping he would do any slight mistake.

“He didn't do me that favour, he did not show any minor weakness. But it was big fun, and I am sure for him as well.

“For us, Imola clearly was a highlight in that strange season. We were convinced that with a season so long and with a lot of hard work we could find the nucleus of our grip problem. Imola seemed to be kind of a new start into the season.”

For 2006 V8 engines came in and the single tyre rule was dropped. We would see a proper season-long fight between Schumacher and Alonso, which ultimately went in favour of the Renault driver – leaving Michael to retire, for the first time, with seven titles to his name. 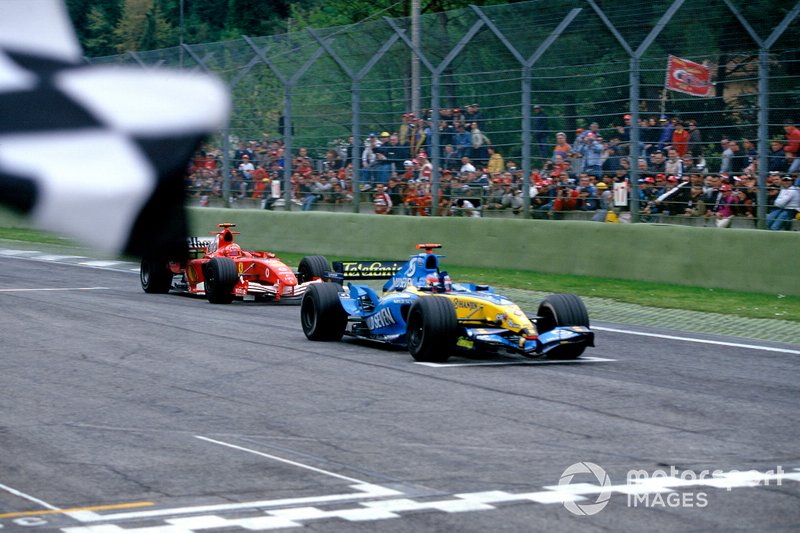 The car that cost Prost his French F1 dream