The driver pairing of Sebastien Loeb and Cristina Gutierrez had set the pace in the Friday afternoon sprint at the Bovington military base and repeated their feat in the Saturday run.

With the qualifying heats split over two days to fit around the limited window of daylight during the British winter, X44 had 1.9s in hand as it looked to maintain its 100% record.

A rule update that mandated the driver order meant Gutierrez was first aboard the car, with X44 the seventh team to run in the session.

The spare-time orthodontist completed her two laps 1.5s down on the best of the day at that point in time as she entered the driver switch zone.

Nine-time World Rally champion Loeb jumped aboard and clawed back eight tenths in the first sector alone, albeit he then lost 0.6s through the points-paying super sector.

But by the end of his tour, the combined times of him and Gutierrez created a 4.11s cushion on Saturday afternoon.

That, added to the Friday benchmark, created an overall of 18m34.778s to seal five effective pole positions from five rounds by the better part of nine seconds over Rosberg X Racing.

Just 16 points separated standings leader RXR from nearest challenger X44 heading into the season finale, and X44 looked to have closed the gap by four points by topping qualifying.

But RXR’s Johan Kristoffersson instead grew the advantage by a single point on Saturday after his storming run through the designated super sector to top that standalone dogfight.

This came as he hopped aboard Nico Rosberg’s team car to take over from Molly Taylor, who deliberately approached the session with caution to protect the car and the likely title.

She was 10s down as she arrived for the driver swap, but Kristofferssson ignored the team orders to fly through his run and seemed not to lose time despite going up onto two wheels.

His 51.94s smashed the super sector benchmark to net a bonus five points as he posted the fastest single lap of the day with a 2m25.908s effort. 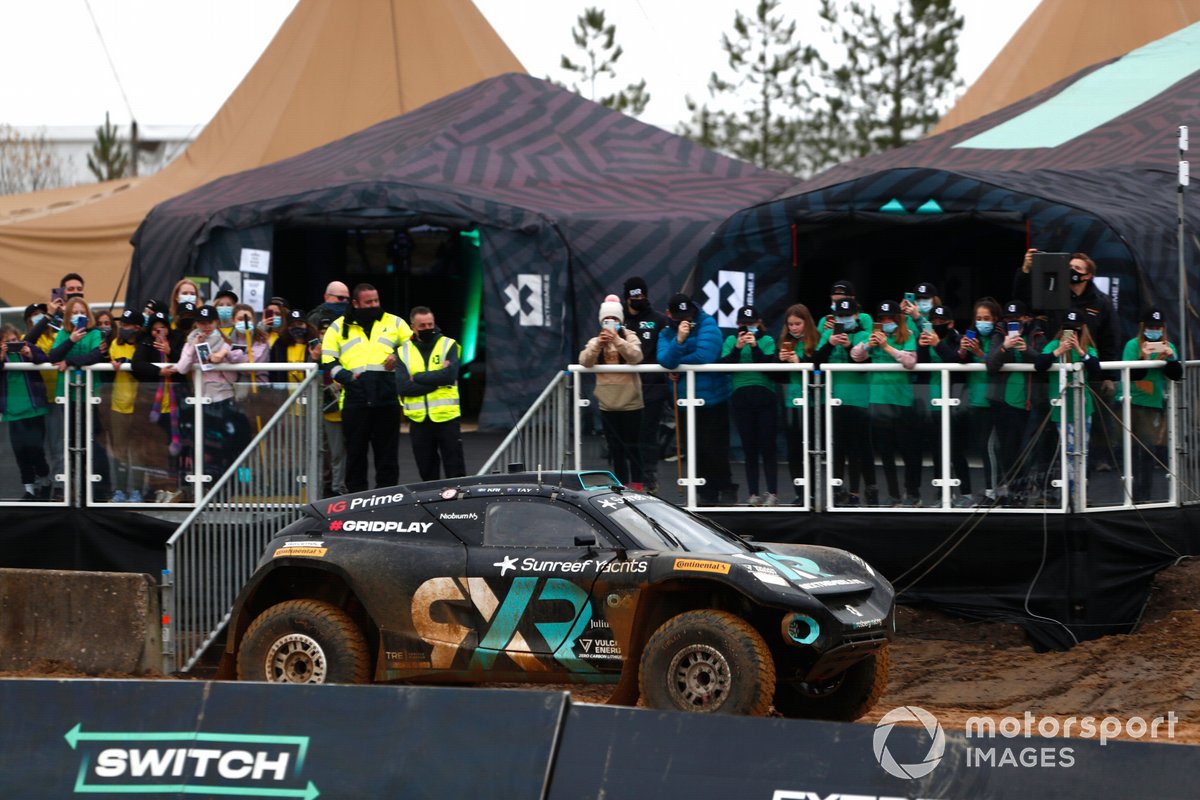 That allowed the Acciona Sainz effort to fall just a tenth of a second shy of snatching the runner-up spot in the joint times, having set the third-best time in the second session.

An impressive return to the series after her W Series clashes for Jamie Chadwick and a storming debut for South African driver Lance Woolridge wrapped up fourth overall for Veloce Racing.

But this pursuit was aided by the remaining rivals all hitting their fair share of trouble.

Abt Cupra’s Jutta Kleinschmidt got the Saturday laps off to a poor start as she was first on to the course and took the wrong route at a fork in the road to miss a waypoint.

The 2001 Dakar Rally winner copped a five-second penalty but was spared a further reprimand having taken a noticeably longer and slower course.

While Jenson Button’s JBXE concern was second-fastest on Saturday, with Mikaela Ahlin-Kottulinsky’s best lap 0.004s quicker than her teammate Kevin Hansen, Friday brake issues and a penalty for a missed gate limited the duo to sixth overall.

Andretti United had work to do to climb from sixth on Friday, but Timmy Hansen made a critical error when he ran wide and fell off the course.

He wedged the car between two tree trunks and lost masses of time switching between drive and reserve to lose 19s before he recovered the crumpled car to the track.

That dropped the Anglo-American squad down to seventh as Chip Ganassi Racing and Xite Energy Racing propped up the order.

After a sluggish driver change while Sara Price struggled to help Kyle Leduc fasten his lap belts, Leduc then lost power steering at an apex of an early turn to career over a patch of shrubs.

Following the only unprovoked car failure of the weekend so far following a raft of upgrades from constructor Spark Racing Technology, Leduc wrestled the car for a lap but was 25s slower than the Friday run of the American crew.

Xite Energy Racing, meanwhile, had attracted the stewards’ attention as the team clocked 17s of penalties on Friday for downing a waypoint flag and pitlane speeding.