Bonus points for topping qualifying and setting the fastest run through the super sector for X44 means the championship fight will go down to the wire, RXR leading by 15, at the Bovington military base.

With male drivers locked in to start the heat, top qualifier Sebastien Loeb lined up on the far-right side of the grid with the shortest run to the first corner.

And while his initial launch was the strongest, Kevin Hansen in the JBXE machine enjoyed a formidable second phase as he deployed the four-second and 400kW hyperdrive boost to bully his way past Loeb.

But unconventionally, Loeb immediately responded by thumbing his hyperdrive leg up but the tight confines of the first sector meant he failed to make it count.

Hansen piled on the misery as he pulled out a remarkable four-second lead as Lance Woolridge, the third starter in the Veloce Racing car, lost the rear and had to save a spin.

He rejoined some 10s down but tore chunks out of Loeb and Hansen to close the gap.

Loeb responded on lap two as he nailed the points-paying super sector, setting a mighty 49.506s through the five waypoints, to reel in Hansen ahead of the driver swap.

Loeb was under a foot behind Hansen as they entered the speed-limited lane, with Woolridge on the pair’s six.

For the first time, in Dorset a split pitlane was used and JBXE had to round a tight right-hander. That combined with a faster X44 switcheroo created the change for position.

Cristina Gutierrez emerged with a 1s lead over Hansen’s tea-mate Mikaela Ahlin-Kottulinsky as the JBXE driver lost a further 0.5s understeering through the mud.

But once Ahlin-Kottulinsky had cleared the boggiest section of the 2.36-mile circuit, she charged after Gutierrez to cross the line just four tenths in arrears.

But, with a five-car finale, both X44 and JBXE will progress to the event and season climax.

Jamie Chadwick, meanwhile, guided the Veloce car across the line 4.9s down the road. 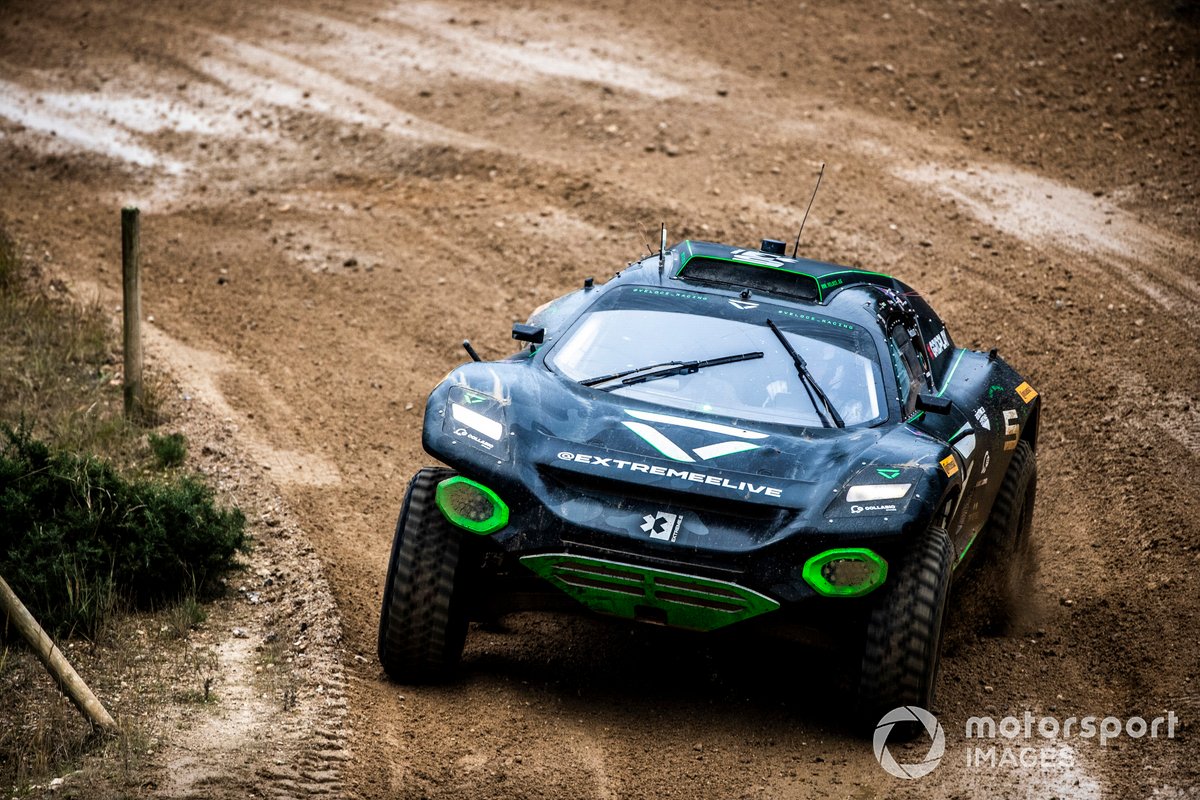 Rosberg X Racing then matched the benchmark of its X44 rival by bagging the spoils in the second semi-final as it chases four wins from the five events in 2021.

Johan Kristoffersson launched superbly with hyperdrive to romp to an initial 2.3s lead as challengers Carlos Sainz Sr (Acciona Sainz) and Mattias Ekstrom (Abt Cupra) were left in his wake.

Sainz’s better launch forced Ekstrom to sit in his muddy rooster tails and with no visibility, the Abt Cupra bounced into the Acciona Sainz car as both suffered cosmetic damage.

Ekstrom used his hyperdrive to attempt a pass on the inside, but Sainz shut the door before the Abt Cupra car vaulted into the air over the ‘Knife Edge’ jump to shed its loose bonnet.

Kristoffersson completed his clean two-lap sprint with 3.8s in hand over Sainz before vacating the hot seat for teammate Molly Taylor.

With Abt Cupra delaying its car at the driver swap before eventually releasing Jutta Kleinschmidt two minutes down, Taylor and Laia Sanz waltzed to the finish to reserve places in the final.

Andretti United booked its slot in the grand finale courtesy of winning the last-chance shootout on Saturday afternoon at the expense of Chip Ganassi and Xite Energy Racing.

A rare mistake in second qualifying for Timmy Hansen forced him into the trees and for the team to fight for its place as it battles with JBXE for third in the championship.

Hansen was back in the car for the start of the so-called ‘Crazy Race’, from which only the winner progresses, and lined up on the preferred far-right side on the grid.

He launched cleanly to scamper into an early lead as Oliver Bennett, in for Xite, was aggressive and sandwiched Kyle Leduc in the Ganassi machine to block the American’s path.

The robust defence continued into the first right-hander as Bennett left no room for Leduc, who had to jump on the brakes to miss the advertising signs on inside of the apex.

Bennett then activated his hyperdrive boost to hold second place as Hansen was some 2.9s clear.

But Leduc impressively wrestled second place back with a fine outside pass round a long right-hand bend on Bennett to reel in Hansen and slash the gap down to 1.6s before a messy second lap undid his efforts.

For good measure, Hansen then smashed a 50.9s run through the super sector to arrive with 3.2s in hand at the driver switch over.

From there, Catie Munnings jumped aboard and coolly kept Leduc’s teammate Sara Price at bay by a slender 0.46s during the remaining lap to book her and Hansen their spot in the final.

Christine Giampaoli Zonca and Bennett, meanwhile, ended up a total of 1m32s in arrears.